I’ve been having a ton of fun identifying birdcalls with Merlin. Is there any way to import my current list into iNaturalist?

We do. Merlin allows you to export your file. Click this link in Merlin: 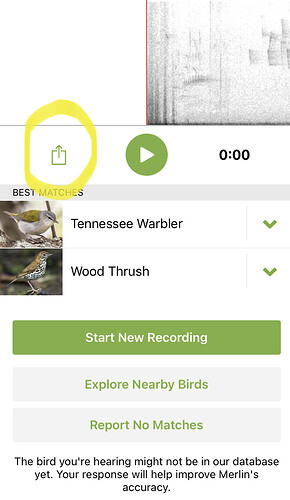 Then download the file to your device or email/text it to yourself and download it to a device for upload into iNat. Or you can process the audio file using an app, such as free Audacity. Ebird offers editing tips, and so do inat users: https://forum.inaturalist.org/t/great-resource-for-us-beginners-at-audio-recordings/32590 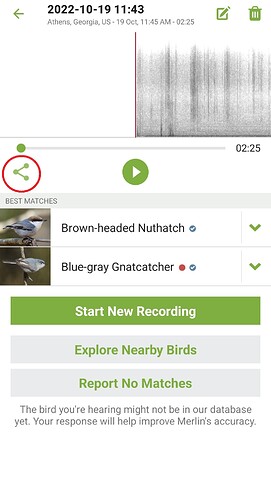 Then you should be able to share directly through iNat. 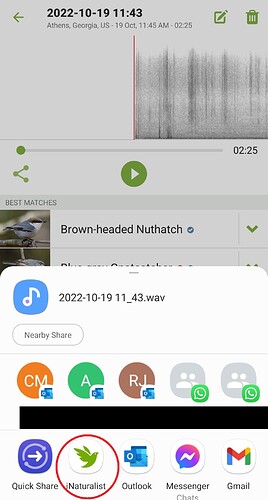 Though as @wildwestnature suggests, unless your recording is already top notch, I suggest processing the audio through Audacity first. That way you can make sure your target species can be clearly heard. The “normalize” and “noise reduction” effects in particular are good tools to become familiar with.

I would also note that if you are doing this, you should suggest IDs based on your own expertise and not just rely on Merlin’s AI (even though it is pretty good).

have no idea how Merlin works. Do Merlin make GBIF data too? if so, importing to iNat may create a data redundancy?

Merlin is just a field guide/AI ID app that has the option to share to other platforms (eBird specifically since they are both products of The Cornell Lab).

In Texas we are seeing numerous erroneous species IDs uploaded on eBird checklists from Merlin-identified field recordings. While Merlin is pretty amazing and certainly improving, it should never be taken as the sole identification method, especially for unusual, unexpected occurrences. So I for one am not a fan of seeing a lot of Merlin ID-ed recordings uploaded. Sound recordings, yes! But they should be independently IDed (e.g. verified by sight).

I’m not a birder and have no experience with that app, but it sounds like what it does is provide an AI-based suggestion for sound files. That sounds very helpful - iNat currently does not do that as the CV algorithm only works on pictures. So I would think posting a Merlin-based ID as a first suggestion should be fine and similar to using a CV suggestion on iNat as the starting point. Of course, agreeing with it to get it to research grade should be based on being able to independently confirm the ID.

While I agree that it is similar, I think that there are a few key differences.

One is that iNat’s computer vision model is trained on iNat data and can be queried by users on the site/app - ie, they can see what the CV model suggests for a given photo and evaluate that suggestion. This isn’t the case for an outside source like Merlin.

Two: iNat provides a notation when a CV suggestion is chosen so a user can evaluate that. iNat also does this with Seek observations. This isn’t the case with an automatically generated suggestion from another source which prevents other users from understanding the source of the ID.

Three: iNat’s guidelines ask us to ID based on our own expertise which using an outside source like Merlin wouldn’t be. For instance, we also shouldn’t upload a bunch of observations with IDs made by a friend as our own IDs either.

I don’t see anything wrong with following Merlin/BirdNET’s ID guidance as long as it’s declared. I wouldn’t want two IDers to both use Merlin/BirdNET and consider it research grade.

This would not be the case if iNat were preparing it’s own audio-id AI. For technical reasons, it’d be nice to keep Merlin’s opinion out of an iNat audio model’s training set. (Well, not too technical: it’s just nice if Merlin and any rival were making independent predictions.) Anyway, this is an excuse for me to ask: Is iNat working on AI suggestions for audio IDs? Bc that’d be awesome.

(Also, I’d love iNat to gain the native ability to normalize and crop both audio and video data. The more consistent the process, the better for research purposes.)

ie, they can see what the CV model suggests for a given photo and evaluate that suggestion.

This can be done on Merlin as well. Under every suggested species for an audio file there is a drop down list of their vocals so you can easily listen through and confirm the suggested ID.

I don’t think visual confirmation is necessary. Many birders ID birds by ear all the time (I usually denote this by adding “heard only” in the species notes on my eBird checklists). However, I’m also experienced enough to know when not to rely solely on my ear (e.g., is that a Red-shouldered Hawk I’m hearing? Maybe, but I need to confirm it is not a Blue Jay mimicking; is that actually the rarity I’m chasing, or is some jerk broadcasting calls?).

I agree, this is a problem. The benefit of iNat over eBird for Merlin-produced recordings, is that people other than the observer must verify the recording on iNat (on eBird only “rarities” get reviewed).

Merlin is wrong a lot.

While Merlin is pretty amazing and certainly improving, it should never be taken as the sole identification method

Any suggestions on how to get a second opinion? Merlin IDs by sound birds that I can’t see. I can hear them, but I am weak at IDing birds by call.

Any suggestions on how to get a second opinion?

iNat is a good place to get your second opinion. Just ID the audio to the best of your ability (it is perfectly ok to just list it as “birds”). iNat is slower with audio IDs than observations with photos, but it usually gets done eventually for clips with clear audio.

For observations in the U.S. & Canada, the Bird Sound ID Group on Facebook is a faster option. I’m guessing there are some similar groups for other parts of the world.

It’s good to look up the suggested species and check yourself if the suggested call/song really matches what was recorded. Unfortunately there aren’t as many good resources for listing “easily confused” bird sounds like the ones that exist for appearance. I definitely agree with other commenters that a visual confirmation on a bird is not needed if the song/call is clearly heard - why is one sense better than another? - but being able to match a sound to a bird you’re seeing helps a ton in getting to the point where you don’t need to see a bird to ID it. It will come with practice!

https://xeno-canto.org/ is a resource for wildlife sounds of all sorts, and allows posting ‘mystery’ recordings for the community to help with as well. In my experience sound ID is not iNat’s strong suit - my clear field recordings are much more likely to be totally untouched than my photos. There are a few users who specialize in audio ID and some projects catered towards it, so tagging those users or submitting to those projects may help. Conversely I do hear xeno canto is quite good.

Is iNat working on AI suggestions for audio IDs? Bc that’d be awesome.

No, this is not an active area of research or planned in the near term.