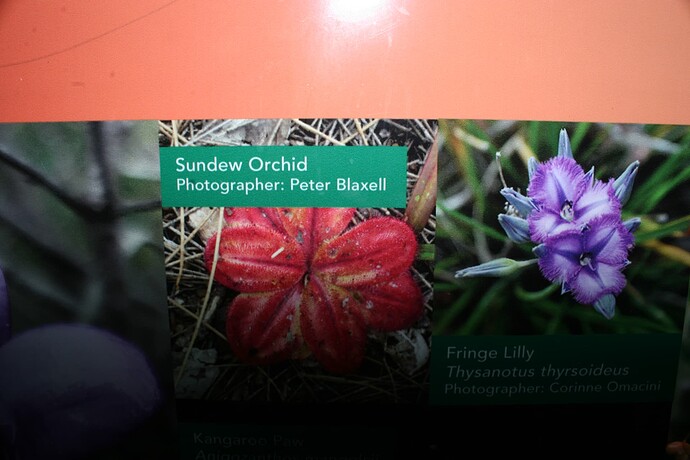 welcome to the forum :)

if there’s a local office or centre nearby, maybe you could bring it up to them to try get it corrected

Online I run into articles periodically that mis-ID pictures. One of them had one of my pictures on iNat with a lot of inaccurate info. I was photo credited but I kind of wish I wasn’t, I don’t really want my name on misinformation. I sent them an email with corrections but they never got back to me.

I was watching a nature documentary talking about lichen, but they kept showing rocks covered with moss. So that was pretty informative.

I know of several interpretive signs (the nice, big, >$500 a piece type of signs posted along nature trails/parks etc) that have plants misidentified on them. I even know of an old sign on top of a mountain that has an annoying spelling error cast in bronze. It bugs me and I’m sure it’s a source of frustration to the rangers on duty to have them frequently pointed out to them since once it’s manufactured and posted it’s pretty much impossible to correct. Sometimes I wonder though how these things were missed during proofreading? Or did they not proofread?

Plant signage at parks, even botanical gardens, may also not always be correct. Spelling errors aren’t uncommon, and e.g. sometimes a sign falls over and a helpful volunteer places it up again but with the wrong plant. I’ve come across quite a few observations on iNat where the observer photographed the sign posted along with the plants but it was obviously for a different species.

Even with a photo credit, they should ask first.

I’m surprised they didn’t include the scientific name, like for the other one. Mistakes with common names are easy to forgive:

Not so much forgiveness for mistaking the scientific name, though. I don’t mind if the changes are due to phylogeny/taxonomy changes, though. Always feel bad for people who learned the name 30 years ago and have had to remember the new name, twice or more!

This article in Santa Fe with a picture of native Sphaeralcea headlining an article on “weeds” ‘The year of the weed’: Santa Fe struggles to keep up with unwanted plants | Local News | santafenewmexican.com

Plant signage at parks, even botanical gardens, may also not always be correct. Spelling errors aren’t uncommon, and e.g. sometimes a sign falls over and a helpful volunteer places it up again but with the wrong plant. I’ve come across quite a few observations on iNat where the observer photographed the sign posted along with the plants but it was obviously for a different species.

If they would have asked I would have made sure that the information they were printing was accurate. In this case I would have also offered to send a different picture that would have fit better anyway.

I saw a poster showing the mammals of a national park in an African country (identity concealed to protect the innocent) where the image intended to represent a buffalo Syncerus caffer was instead of a buffalo Bison bison. Access to Google when you don’t really know what you’re doing can be a dangerous thing.

That species of Drosera doesn’t even have a common name!

the image intended to represent a buffalo Syncerus caffer was instead of a buffalo Bison bison.

What? not a buffalo Bubalis bubalis?

I remember trying to read up on red wolves. Among other interesting bits of misinformation, I found out that red wolves’ prey includes, for example, moose, caribou, and musk ox.

Yeah… clearly someone cribbed off an article about gray wolves and just changed out gray for red.

Or labeling syrphid flies as bees, which I’m sure the syrphid would be happy to know its disguise has fooled even the graphic designers! But it’s disappointing that the public turns to naturalists and non-profits for this knowledge and are being given, by no malicious intent, inaccurate information, that they may then go and spread to more people. I hesitate to go and tell the volunteers working at these places about the errors because it’s not like they probably have the funding to remake the sign…but I wish more effort would be made beforehand to get the right info, especially when it’s usually not particularly complicated subject matter. There’s plenty of informed sources or experts to reach out to for fact-checking.

Better to let them know - at least for when the signs are replaced.

identity concealed to protect the innocent

It is one of the things I like about virtual. iNat for example. Mistakes can be found. And corrected. Nothing is carved in stone.

Also respect and gratitude to Wiki editors out of iNat. That Wiki entry shows up first for a Google search then spreads virally across the internet. Eminently worth correcting. Even making a stub (which is factually correct)