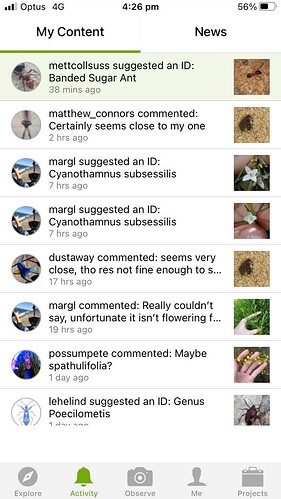 I don’t know if this first part is related to the problem, but just in case it’s relevant.

Opened the iOS app and tapped the activity tab; saw that I had two notifications. Before I could even tap either of them, a pop up appeared covering the whole screen. The header said Privacy, and there were two items, both with a slider I could push to indicate agreement or disagreement. First item was did I agree to share some of my personal info with iNat, second was did I consent for data to be sent to the USA. I didn’t get a chance to do anything on this screen before it disappeared before I could click anything.

I haven’t opened the notification yet on desktop in case I need it unopened to troubleshoot.

I decided to open it on the computer, no problem. However, tapping on that notification on the app, even though it’s now been opened, still causes the app to crash

I can try, but it’ll take a lot of scrolling on the phone; it’s from quite far back

Is it possible that this is more of an issue with your phone? I’ve found that the app can be pretty susceptible (more so than a lot of other apps too, unfortunately) to crashes and lag when my phone is going slow or has too much running in the back. A lot of the time it’ll be exactly what’s happening to you too, where it’s just one specific observation not working, and the app closes immediately. Usually if I close out of everything else I have open or log out and log back on, the problems will stop.

I logged out, logged back in, now there’s no issue. God knows why that fixed it, but worked as you said, so thanks