Ivy killing trees is a myth?!?

Continuing the discussion from Weird and Strange Animal Myths:

Wait, ivy doesn’t kill trees? I always thought it would eventually if it overtakes a tree.

Absolutely not!!! Ivy just uses the tree as a support and while it does so, provides a home and source of food for hundreds of other life forms. If the tree is already in bad conditions due to age, disease or environmental stress, it may give the impression that the ivy is the cause as ivy leaves will be the main/only green visible, but that’s not the case. When I walk through the woods, one of the saddest things for me is to see the ivy trunks cut through and the ivy dying, so destroying a micro-habitat rich in biodiversity.

Unfortunately this myth is spread by still many ignorant people who, mostly in good faith, think that cutting the ivy trunks would be good for the woods. They even do not know that the event of the fall of a tree in a wood is not a tragedy but just part of its normal turnover. Where the genus Hedera is native and it has “always” been present in woods, no one should harm its aerial trunks.
It is definitively a myth that couples with the stupid convinction that woods must be necessarily managed through cuttings because the latter are beneficial for the woods themselves allowing them to renew.

Thank you so much for this, you’re saving me from a really stupid decision and, well, to be honest, a lot of effort.

Is there no risk of the ivy competing with the tree for light and weakening it, then? 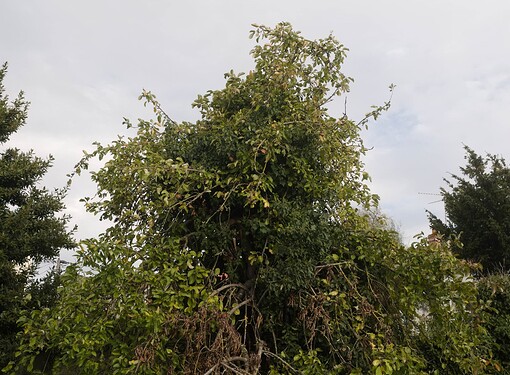 When I see my apple tree, which is old and not that healthy in a garden that stood abandoned for years, like this, I’m concerned that the top is more ivy than tree. Gardeners I’ve talked to all replied with the myth and so far only my reluctance to destroy anymore bird habitat than strictly necessary (as well as my inherent laziness) has stopped me from cutting it.

I’m guessing it depends on where you are and whether the trees in your area co-evolved with ivy or not. Here in the US, it is one of our worst invasives and will smother native vegetation where it takes over. I’ve seen places where the ground was just mono-culture of ivy, no chance for native plants to compete. I always wonder what would happen in a competition between ivy and kudzu, another of our really aggressive invasive climbers. The sheer weight of these climbers on the trees can physically bring them down in a bad storm. In the UK or mainland Europe, ivy is part of the native ecosystem, and so is kudzu in its native regions of Asia, but not here in the US. We have others like Virginia creeper and poison ivy instead, which both make berries appreciated by birds.

Ivy’s climbing roots can do quite a bit of damage. My parents had ivy climbing up on their house, planted purposefully originally to avoid having to repaint the facade that often, but it did so much damage to the walls that they had to cut it all down and remove it again. I’ve seen it get into old brick walls and contributing to their destruction. I wonder if and how much damage it does to tree bark, and if maybe European trees can handle that better than trees over here in the US. Once damaged, wounds in the bark may be an entry point for diseases that might kill the trees (example beech bark disease, which I understand is caused by feeding damage from an invasive insect allowing a native fungus to infect trees that it usually wouldn’t harm if the bark was intact).

yeah in California in the US, where English ivy is invasive, it absolutely kills trees. Same with oriental bittersweet in the Northeast and Kudzu and again ivy in the Southeast US. It does not surprise me at all that in its native habitat it does not kill trees or otherwise is just part of the ecosystem and should be left alone. In the US people sometimes do similar with wild grape or virginia creeper vines, and in California with native wild cucumber, ripping it off other plants to help them. Generally native species will not cause harm to native ecosystems unless there is some other severe disturbance (for instance deer can cause severe damage if all their predators are removed and they become very overpopulated). Sometimes introduced species do damage and sometimes they do not but there are some invasive vines that can do severe damage by killing trees.

I always wonder what would happen in a competition between ivy and kudzu, another of our really aggressive invasive climbers.

I’ve heard in the long run ivy wins even though it doesn’t grow quite as fast, because ivy is shade tolerant and kudzu is not. But in very disturbed open areas kudzu may win out by just out growing ivy. I’ve wondered what the end game of extremely invasive vines is, like 100 years out. Eventually they would run out of trees and just end up growing on the ground, where animals could eat them and they wouldn’t be able to climb. I feel like in that case kudzu loses as some things eat it right? But ivy seems to be inedible to most animals?

Yes, kudzu is edible - there are recipes for it on the internet. Part of its competitive edge is that it is a legume complete with nitrogen-fixing symbionts, so I’m guessing it might do better in open areas and on poor soil. It does not need trees to climb - I’ve seen entire hillsides just covered in it. It does eagerly climb up on anything in its path though, houses, power poles, whatever, causing over $100 million in damage each year and earning its nickname as “the weed that ate the South.”

We have a lot of deer in our area and they actually do eat English ivy, but that doesn’t seem enough to keep it under control where it goes rogue.

If the tree trunk is weak and there is a large weight of ivy in the canopy, that can bring the tree down, especially in winter gales when the tree will have little wind resistance because it has lost its leaves but the ivy is permanently in leaf catching the wind. As someone said earlier, that is a natural situation in a wood and a fallen tree is another natural habitat. But if it is your prized apple tree, you may not be so carefree about what happens to it.

Another situation where it might be justified to take ivy off a tree is when the tree trunk is habitat to conservation-worthy lichens or mosses, as the ivy is likely to shade them out.

Thanks for all the replies everyone! Yeah, I think it is different here in the US. Trees really seem to struggle under the weight of ivy. It’s been suggested by someone in forestry who came by to remove another invasive (garlic mustard) to cut the vine at the base but leave the ivy itself on the tree.