For a long time I kind of just assumed that salmon dying after reproduction just Quietly Passed Away From Sudden Aging. Not true.

Metabolic self-poisoning kills them. Their organs begin shutting down from sheer stress and fungi grow all over them and it’s horrible. One research paper even dared to say it was p much Cushing’s Disease.

Imagine being a daphnid swimming around seeing chandelier after chandelier of clear chambers containing your acquaintances slowly melting away, much less if you were sucked into one.

it’s pretty common for 90+% of caterpillars to be killed by something before they reach adulthood. At least with a predatory wasp, it’s over pretty quickly compared to a parasitoid wasp

Octopuses dying to give life for their brood, female spiders being eaten by their youngs.

Unborn sharks killing each other in the womb before being born.

Er, this probably doesn’t need to be said but maybe we keep the gory details to text-based or if appropriate links that contain proper disclaimers.

Fun subject though with Halloween upcoming, many of these situations are very ‘sci-fi’ sounding and crazy to think that they’re all things that just normally happen.

That sea louse that takes up residence in a fish’s mouth, causes the tongue to wither, and puts itself as the replacement for that organ.

Cordeceps and related fungi that turn insects into zombies.

Last summer I saw an interesting wasp with orange wings flying around my back yard. iNat was able to put an ID to my poor-quality photos: Pepsis thisbe, a species of Tarantula Hawk Wasp.

At first, I was horrified by how they feed their young. (Here’s the Wikipedia description.)

The female tarantula hawk wasp stings a tarantula between the legs, paralyzes it, then drags the prey to a specially prepared burrow, where a single egg is laid on the spider’s abdomen, and the burrow entrance is covered. […] When the wasp larva hatches, it creates a small hole in the spider’s abdomen, then enters and feeds voraciously, avoiding vital organs for as long as possible to keep the spider alive. After several weeks, the larva pupates. Finally, the wasp becomes an adult and emerges from the spider’s abdomen to continue the life cycle.

But at least I was safe, right? Then I discovered that they have reputedly the world’s most painful known sting.

Fixed it for you @rupertclayton !

(Executioner Paper Wasps, which we have here and were my previous wasp sting nightmare, are like 25 - 30 mm? Your beast runs up to 44, nopenopenope.)

When I was along the border in Arizona last year there were washouts with bushes flowering that were teeming with insects, I was trying to get moths and these wasps to feed on my hand by squeezing the juice of an orange on my hand and holding it right next to them. It was only after I got home I read about their sting, even if they did decide to land on my hand I’m sure it would have fine as they’re pretty docile unless provoked, but I don’t think I’ll ever be able to do that in such confidence again!

Oh, it should be mentioned too that they’re absolutely gorgeous with their vibrant orange wings and iridescent purple/green sheen.

TBH, that was pretty much my immediate response! But I told myself I was overreacting and I ought to be more curious about this insect that was rapidly and methodically examining all the spider burrows.

Oh, it should be mentioned too that they’re absolutely gorgeous with their vibrant orange wings and iridescent purple/green sheen.

Yes! But now I’m thinking their beautiful colors are a cunning trick to lure unsuspecting iNatters.

Humans have to pass their giant-headed offspring through their narrow biped hips. Sometime the skull of the offspring is inside the pelvis of the mother for days.

Sometime the skull of the offspring is inside the pelvis of the mother for days.

And sometimes it dies that way and she gets an obstetrical fistula.

From the Wikipedia dismabiguation page:

The common name “brain-eating amoeba” may refer to:

But now I’m thinking their beautiful colors are a cunning trick to lure unsuspecting iNatters.

Your beast runs up to 44, nopenopenope.

Come on, irrational entoslander? On iNat of all places? Seriously?

Yes, we were asked for tragic and gory.

Were you attempting to reply to me?

Slander is spoken. I believe the portmanteau you wish to craft is entolibel.

Glad you added a human-affecting gory answer! In the same category, maybe: prion disease and botflies.

Occasionally, male anglerfish will attach and fuse to a female that still isn’t completely fully grown.

Like a chain being engulfed into the bark of a growing tree, the male anglerfish is swallowed up by the skin of the female- a fish once attached by the teeth is now joined by the gills to his mate, his head completely sunken into the flesh of the female.

Even after all of this, though? The male is still alive- their circulatory systems have fused, and he will live and remain alive for as long as his mate does.

…Oh, also, not all deepsea pelagic anglers practice sexual parasitism!! I like this graph a lot: 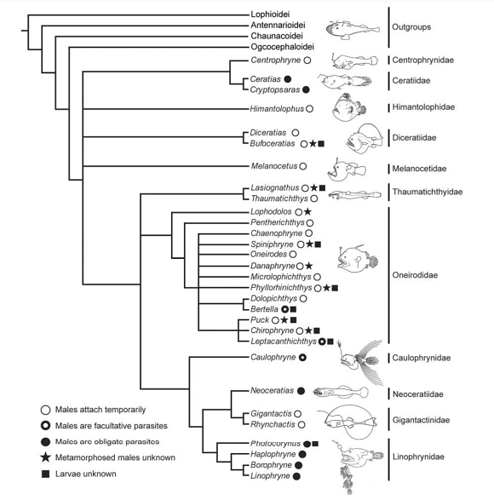