I just saw a Nearctic Blue Mud-dauber Wasp (Chalybion californicum) on my window sill with a little white ball in its jaws. Shortly I realized it was a ball of urates that it had cut off nearby treefrog feces. I then remembered a photo I took last year where one appeared to have some interest in some bird droppings. Looking closely at the photo now I realize it had removed some of the urates. I assume this urate collection is something to incorporate into their nest building. Has anyone else seen or heard of this behavior before? 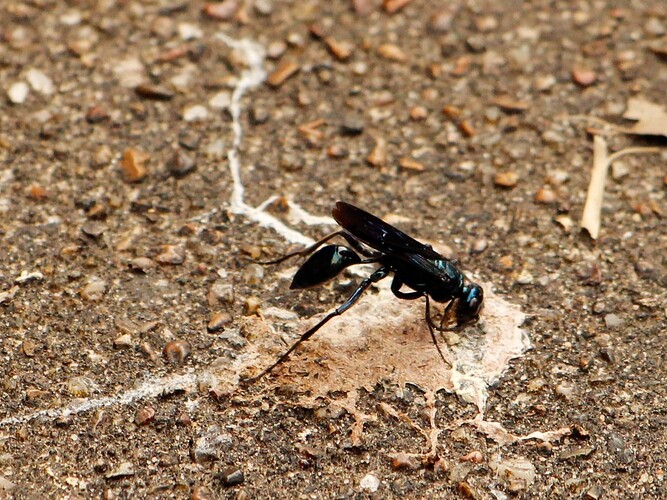 did you see which part of the nest the urates were used to build?

No, I didn’t see where they took the urates to. No idea where the nests were/are.

i wonder if the mud daubers would even differentiate between mud and urates, as long as they can be used to build nests? (the ground looks sort of wet from rain, and the urates look a little drier. so i wonder if the urates just happened to have better consistency for building than the soil at that moment?)

The concrete in that photo was not wet. It had not rained recently when I saw it happen the other day. We have plenty of spots in our yard where the clay and sand mixed soil is not covered with vegetation.