Didn’t know this was a thing until I started noticing it happening recently. I thought you just withdraw and correct your ID rather than delete your ID all together to ‘save face’. Happened once when I corrected an ID with 3 people agreeing to the wrong ID, one of their wrong suggestions disappeared. Happened again with someone who made a mistake on their own ID and I became the first identification. How did they do it?

How did they do it? 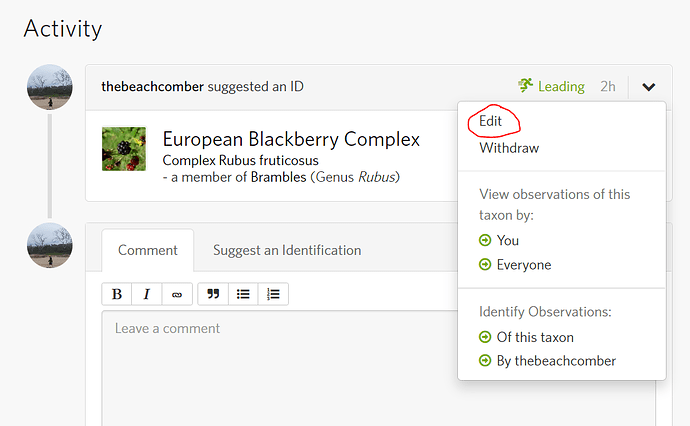 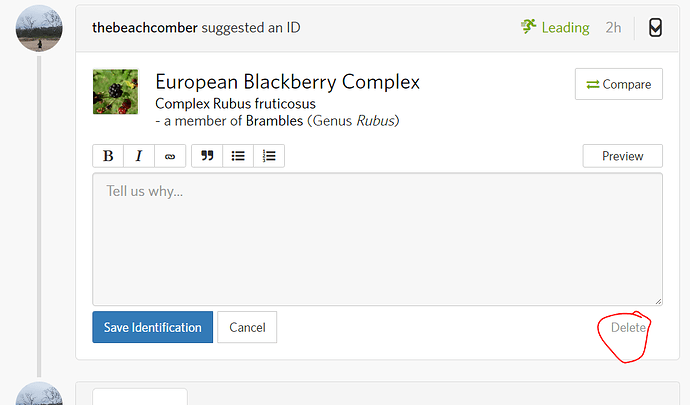 If you delete ids it doesn’t mean you “save your face”! If you don’t want to deal with that observation or get notifications from it, that is the fastest way to so it. Plus withdrawn ids look awful and there should be a reason to leave them.

I’m not as bothered by withdrawn IDs and actually find them useful for two main reasons:

That said, I delete my IDs if they are an accident (e.g. slipping up and clicking the wrong option among the ID suggestions, or accidentally clicking twice resulting in one ID being withdrawn by adding a second ID for the same taxon).

I agree. I find withdrawn IDs useful and appreciate them. Deleted IDs leave a hole in the thread of reasoning for an identification that I find confusing and frustrating. It takes more time for me to deal with deleted IDs than withdrawn ones.

It was all discussed too many times, still withdrawn ids take too much space and clutter the observation, but I said it in multiple previous topics on that theme, and read exactly the same reasoning as you wrote, so nothing new here, everybody can do what they wish within iNat rules.

I think there are enough problems on iNaturalist of people violating the actual iNaturalist rules. What is the purpose of dwelling on users’ choices that do not violate the iNaturalist rules? And, by the way, criticizing people by name on this forum is poor form.

You know people are different and that discord community already pushed some from social part of iNat, stalking users is not the best idea, that’s creepy and weird.

Dang… sorry I didn’t know what I said would be so controversial and I won’t mention users by name like that again; lesson learned.

I would like to ask which part of what I had mentioned you all considered stalking? We (more they, I’m not even really involved) are considering it more to be like in circumstances like the above question or if someone tells him to stop and he gets in trouble for it etc. There, evidence might help as perhaps he’s already deleted all of them. These images are just linked with their observation in a thread and put away. They are not used for inappropriate uses, nor sold, distributed, or any such thing. I did not consider this to be stalking, and am still confused on which part counts as such. I am simply trying to clear this up, hope i am successful.

Again, I’m seriously sorry about that… lesson learned, won’t do it again.

P.S. How did the Discord community push others away from the social part of iNat? I see no reason for why. I have not experienced or seen bullying etc. that has caused someone to leave (I am on every iNat and bug related server there is). I hope we can get them back…

Just a reminder to keep the discussion focused on the original question about deleting identifications (which has been solved). The iNat forum is really for discussing iNat topics, not the Discord server (which is unofficial and not affiliated with iNat). Thanks!

Why would anyone do that? That’s a right every user has, to delete anything they add to iNat. There’s no crime to have evidence for.

I have not experienced or seen bullying

You didn’t think that if you do that to a user, the user can see what you do?

You didn’t think that if you do that to a user, the user can see what you do?

Not sure what you mean here.

Either way, I screwed up. Would like not mentioning this again (only maybe to clarify what you mean here).

We had a person explicitly say that people on discord were discussing him in a negative way.
Now, I will obey the moderator.

There is a special situation where I did delete my identification.
Sometimes, a user knows the species, but that is not yet present on iNat. In that case, I either import it via “Search external name providers” or flag it for curation, and identify it then to that species - though I do not know the species. After the observer has agreed, I delete my id, because I actually did not want to give that id. But my experience taught me that only by my giving that id will the observer then be able to add his original id…

In those cases - flag for missing species - I withdraw my ID later - and leave a comment.

FWIW, you can unsubscribe from notifications for a particular observation like this:

I delete my IDs if it’s a straight-up mistake. As in, not confusing one species for another, but a typo or I chose something I didn’t intend. That doesn’t help fuel the “similarly confused species” database.