It’s helpful that the database editors and Tiarella author provide their contact e-mails. I sent this to all three: 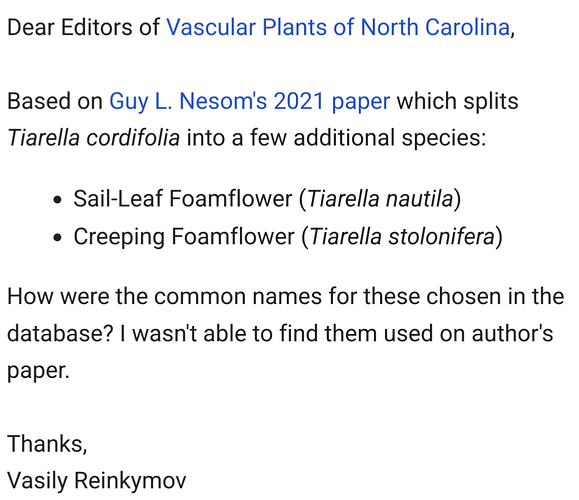 Not sure if this is now off-topic, but it’s always worth contacting the sources if possible.

it’s always worth contacting the sources if possible

So Guy himself may have entered those common names into the database? He at least appears to think those names are appropriate.

Well, in theory you should be able to have Strawberry Bush AND Hearts A-Bursting as common names, because you can have more than one. I think it’s a shame to remove names like that in pursuit of some common name purity since there isn’t any standard for common names, they are just fluid linguistic entities. and hearts a burstin’ is just a neat name.

It’s helpful that the database editors and Tiarella author provide their contact e-mails. I sent this to all three:

As for these common names, it appears Guy Nesom created them? Is that considered notable enough for iNat inclusion? It seems sketchy for me to transition widely known species to a new common name based on something like this. I don’t have a problem with it being on the list of common names, but i don’t think it should be the primary one given this origin.

As for these common names, it appears Guy Nesom created them? Is that considered notable enough for iNat inclusion? It seems sketchy for me to transition widely known species to a new common name based on something like this. I don’t have a problem with it being on the list of common names, but i don’t think it should be the primary one given this origin.

How about the folks who want to participate in determining the primary common name for these species play virtual rock/paper/scissors? There’s no other mechanism to come to an agreement on issues like this as there is no iNat policy to evaluate at what point a vernacular name is widely used enough to be considered here on iNat.

I think based on the reply, it’s not clear whether author or editors changed the common name. What is clear, at least from the taxon split is:

Which I think leads to two other questions:

can i get some admin input here? is it true that the ‘do not make up common names that are not commonly used’ policy does not apply to taxonomists, who instead are allowed to make up any common names they want, even if millions of people continue to use the existing names?

That policy is really for people making up names just for iNat. If a paper is used to describe new species, and the author(s) suggest new common names for those new species, it seems OK to me to add on iNat if we’re following that paper. If there are issues with a specific paper and/or its names, then that discussion should be had on a taxon flag.

For splits in general, it seems prudent to me to add both the new name and keep the old name to the species, so that if someone searches for the taxon using the old name, it will appear as a search result. Which name should be the default name for the taxon is a thornier issue, and I don’t think there’s a broad policy which can cover that. Either way, there will always be an adjustment period for changes like this (supposing that the changes hold). And I think people in general will adjust, even if it’s painful and creates mis-ID issues and such on iNat.

As for the broader appropriateness of a taxonomist suggesting common names for newly-described taxa, I think that’s a bit beyond iNat.

I thought in the past people had been taking common names from places like external internet sites that were possibly also created by inat users. And that we decided that wasn’t appropriate? That doesn’t seem too different from this. The main difference here seems academic social status of the person proposing the name, i think.

I don’t have issue with creeping foamflower being a name but it seems pretty clear it shouldn’t be the name. For context this is kind of like deciding the chamise in all of california north of Santa Barbara is a different species and naming it ‘Northern White Shanks’ or something, totally deleting the name ‘Chamise’ for all chamise observations in most of California. This foamflower isn’t quite as ubiquitous as chamise, but it’s a very common and well known species.

I think taxonomists are more interested in the biological reality, and not the feelings of people who like a random common name. Use whatever name you want (creeping, heartleaf, or Bob’s) but keep in mind it doesn’t mean anything to taxonomists. If there are actually 4 species of this genus, laymen shouldn’t impede progress by denying 4 species exist and refusing to change. Of course someone could come along and refute the 4 species hypothesis, but if they can’t then the new taxonomy stands. This is how science works. The one vs 4 species hypotheses (or even something else) are both valid, but the most recent taxonomic revision holds priority given the rules of nomenclature. Oversplitting can be a problem, but if the taxonomic treatment is robust, it stands until more data overturns it. It seems to be more phylogenetics that is changing taxonomy than pure morphology-based taxonomy, because of the adherence to the clade-based labels.

For goodness sakes, this whole thread is another great reason why everyone should default their iNat to scientific names and just get used to using them.

No, we shouldn’t, let’s not decide for others how they use iNat.

Wow, this is super rude. It isn’t about feelings and i’m not a laymen. I have worked in this field for two decades and have a masters. But it shouldn’t matter, because this is iNaturalist not LinkedIn. We aren’t ranked here by our level of education, or at least we aren’t supposed to be. The way a bunch of you can’t form an argument without attacking someone else, it says a lot here. Anyone who doesn’t agree with the splitters’ concept of species or how that is defined is described as ignorant, stupid, lazy, overemotional, or malicious. All because you don’t have any actual arguments that hold up, because in fact there isn’t a consistent definition between species and subspecies, and something that would have been a subspecies before is now a full species, just because that’s ‘how it is done’. I think i am done here, i was trying to resolve a real issue brought up by other users, but i just get attacked for it. Again.

I’m not ignorant i just actually do ecology work on the ground, and talk to landowners and stakeholders and see the problems caused by these policies all the time. It sucks that people won’t listen and try to help, instead they accuse me of being a fake scientist or more worried about my ‘feelings’. Just doing what Tony said, leave the old name and also add the new name, would go a long way but apparently that’s too much to ask to help out the 99% of iNaturalist users who aren’t taxonomists or self styled splitter fanboys. But apparently some people here are too caught up in their ‘feelings’ when they are hurt and offended that someone dare question their complete removal of the subspecies concept over the last 10 years.

As this discussion is becoming personal and (more) contentious, I’ve closed it.