Treat hyphens as hyphens and underscore as spaces.

Please change the function that automatically IDs observations based on the source filename so that it treats hyphens as non-separator characters. Currently the system treats hyphens the same as spaces leading to unexpected results. This would cause an observation loaded from a file named Orange-crownedWarblerIMG_7385.jpg to be loaded without an ID. Under the current system, it treats the hyphen as a space and prefills in the name “Orange” which is unexpected and clearly wrong. Standard usage calls for an underscore to be parsed as a space instead.

I apporoved this but I think the best thing to do would be to use scientific names where possible. Trying to support various common name constructions is always going to be difficult.

When we added this feature, here’s what I wrote:

we can’t promise it will work in all situations and with all formatting schemes. Our advice:

just curious… how difficult would it be to make the automatic ID based on filename something that could be toggled off when loading? seems like a toggle might help in some cases like this.

When I’m trying to type a common name, the fact that the machine ignores hyphens is useful, because sometimes the same name is spelled with a hyphen, sometimes at one run-together word, and sometimes as two words. So I won’t be voting for this, unless further information changes my mind.

When I’m trying to type a common name

just to clarify a bit, i believe this feature request is talking specifically about what the system does when translating filenames in to automatic IDs during upload, not about other situations such as when you’re looking up taxa when making IDs or when looking up taxa to get more information about a taxon.

I don’t use the feature which looks at filenames so I don’t have much of an opinion on this, but I hope people realize that scientific names can contain hyphens (Arctostaphylos uva-ursi and Symphyotrichum novae-angliae are two well known examples).

Can, but I’m told hypenated names are not valid so our salvias were renamed.
Salvia africana has lost its -caerula and the - blue African sky - we had before. Also Salvia aurea (lost -lutea). No one dares approach Euphorbia caput-medusae? Beware snakes!

@pisum if you put in a feature request for toggle off, I would support you. I prefer to sort my photos into an elaborate hierarchy of folders (my space, my rules for me). But we have had many forum threads from people who missed the announcement, or don’t understand the working as intended, or want to change it to suit them.

@pisum if you put in a feature request for toggle off, I would support you.

i probably won’t put in such a feature request, since i never use the automatic ID from filename feature myself. i just mentioned it, since i think a toggle would be one way to approach this issue while also addressing other use case permutations yet to be encountered.

Thank you for making this request! The current situation is one of the most frustrating features of iNat. I’ve never understood why it would make sense to programmers for iNat to recognize a hyphen if I type it in, but not in an imported filename.

but you didn’t vote for it?

System doesn’t recognize it when you type it in, it is treated as a space.

I’ve never understood why it would make sense to programmers for iNat to recognize a hyphen if I type it in, but not in an imported filename.

i think what you’re saying has merit, but i think this is technically a little different from what is being requested in this thread. it’s a very subtle but important difference.

the request as written is asking for Orange-crownedWarblerIMG to be treated as a single string rather than being parsed as two separate strings Orange + crownedWarblerIMG.

i support the kind of request that i think you’re asking for though, and if the original request is implemented, i think it would makes sense to also incorporate this other request at the same time.

here’s a little more detail about what happens if currently if you try to match on some variation of Orange-crowned Warbler in the filename:

if you have a file named any of the variations below, the observation will get loaded as an Orange:

if you have a file named leiothlypis celata.jpg (or any variation of that), the observation will get loaded as an Orange-crowned Warbler.

if you have a file named orangecrownedwarbler.jpg, the observation will get loaded without an automatic taxon.

if you have a file named orange balsam.jpg (or any variation of that), the observation will get loaded as Common Jewelweed (aka Orange Balsam).

Thanks so much for breaking this down. Your analysis makes clear that it actually is a bug and not a feature! Much appreciated.

Can, but I’m told hypenated names are not valid so our salvias were renamed.
Salvia africana has lost its -caerula and the - blue African sky - we had before. Also Salvia aurea (lost -lutea). No one dares approach Euphorbia caput-medusae? Beware snakes!

Apparently, hyphens are permitted by the ICBN only in certain circumstances:

60.9. The use of a hyphen in a compound epithet is treated as an error to be corrected by deletion of the hyphen, unless the epithet is formed of words that usually stand independently or the letters before and after the hyphen are the same, when a hyphen is permitted (see Art. 23.1 and 23.3).

Note 3. Art. 60.9 refers only to epithets (in combinations), not to names of genera or taxa in higher ranks; a generic name published with a hyphen can be changed only by conservation (Art. 14.11).

In the current botanical code, ICNafp, it’s renumbered to 60.11.:

60.11. The use of a hyphen in a compound epithet is treated as an error to be corrected by deletion of the hyphen. A hyphen is permitted only when the epithet is formed of words that usually stand independently, or when the letters before and after the hyphen are the same (see also Art. 23.1 and 23.3).

Thanks! I should have realized that my Google search might turn up an outdated version.

The meaning of “formed of words that usually stand independently” is so opaque that one suspects its authors didn’t know what they meant, either.

The intended meaning is apparently closer to: “formed of words that are separately inflected so as to be grammatically independent”. Based on the examples, at least, the intent is clearly syntactic rather than semantic. We can hardly doubt that the two words in “Costa Rica” usually stand independently, but “costa-ricensis” is corrected to “costaricensis”. Should anyone have published an abomination like “costensis-ricensis”, though, the hyphen would have to be maintained. Similarly, Symphyotrichum novae-angliae" keeps its hyphen, while had it been “neo-angliae” or “nov-angliae” the hyphen would be dropped. But, just to make this example confusing, “nova-angliae” would have kept its hyphen because of the separate “repeated letter” rule.

Can, but I’m told hypenated names are not valid so our salvias were renamed.
Salvia africana has lost its -caerula and the - blue African sky - we had before. Also Salvia aurea (lost -lutea).

I was curious about this case and now regret my curiosity. :-) In case you would like to regret it, as well:

The abbreviations (“afr.”) are very weird, but not disallowed. ICNafp Article 60.14:

The original context makes it hard to see “afr.” as anything but “africana”, and that seems to be how everyone’s interpreted it. Of course, just expanding “afr.” to “africana” gives us "Salvia africana caerulea and “Salvia africana lutea”. There are a couple of similar examples under ICNafp Article 60.11:

23.6. The following designations are not to be regarded as species names:
[…]
(c) Designations of species consisting of a generic name followed by two or more adjectival words in the nominative case.

Ex. 19. “Salvia africana caerulea” (Linnaeus, Sp. Pl.: 26. 1753) and “Gnaphalium fruticosum flavum” (Forsskål, Fl. Aegypt.-Arab.: cxix. 1775) are generic names followed by two adjectival words in the nominative case. They are not to be regarded as species names.

So, the short version is: “Salvia africana-caerulea” and “Salvia africana-lutea” are, indeed, incorrect according to the botanical code. The problem is that the specific epithets consist of two adjectives in the nominative case. The hyphens aren’t the problem, and in a different grammatical context the code would specifically tell us to insert them.

A fun question—by which I mean a question I prefer not to think about—is whether “Salvia africana-caerulea” would be allowed under the ICNafp if it had been published in that form, with the hyphen. Are those still “two words”? And… would we keep the hyphen?

I want my blue African sky ;~) 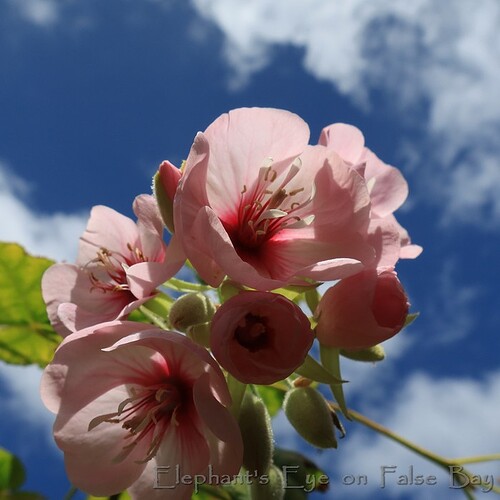 Euphorbia caput-medusae is safe then. Medusa and her head are not adjectives.