Photos with names beginning with "Orange..."

Step 1: Upload a photo whose name starts with “Orange” such as "Orange-crownedWarblerIMG_7385.jpg.

Step 2: Immediately iNaturalist fills in the species with the word “Orange.”

Step 3: Because the species field is prefilled, iNaturalist makes no attempt to guess the real species unless the user deletes the word “Orange.” 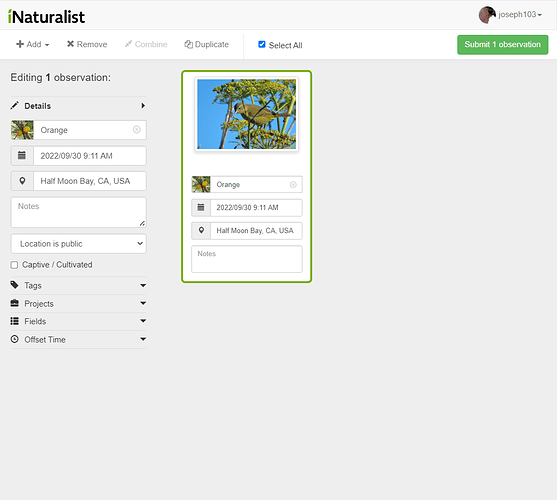 That’s not a bug, every tag of file name containing a taxon name will be used as a fast id. If your file name had separation between 2 other words, iNat would recognize the full name.

moved to general as not a bug

I include species scientific names in my filenames precisely because the iNat uploader will parse that into my suggested species name. But as you’ve noticed, if the filename is not spelled and formatted the same as an existing iNat taxon, you will get spurious results or nothing at all.
IF you’d like to examine what iNat’s CV suggests as an ID in such cases, you can Cut your fast ID name out of the Species Name field, click the cursor in that field and see what iNat comes up with. You could then either accept it or Paste your own ID back into the field to replace iNat’s suggestion.
One of my shortcut’s also gives tricky results at upload: I label my bird pics with the standard four-letter abbreviations for North American common names. iNat doesn’t parse those codes properly from the filename at upload, but if I then type that code in the Species Name box, it will correctly fill in the full Common Name, such as BEKI => Belted Kingfisher.

But I am not naming the file the exact name of any taxon. I specifically avoid that by appending the original file name and I never use spaces. So “Orange-crownedWarblerIMG_7385.jpg” should not be assuming that I am uploading a picture of an orange. Also this never happens with any other file names. A Blue-throatedMountain-gem does not automatically fill in Blue. It ONLY happens with names that start with Orange.

The file name is “Orange-crownedWarblerIMG_7385.jpg.” There are no spaces at all so it should not be assuming anything. No other bird name does this and if you say it’s a feature I’m afraid it is not working as expected.

Because there’s nothing called just “blue”, it’s an automatic system with no difference between space and -. It is working as it should be and it’s not connected with oranges specifically.

That’s the problem. It should distinguish between a space and a hyphen. How about fixing it so that an underscore is the same as a space, but a hyphen is not? That would bring it into compliance with standard naming conventions.

Yesterday I uploaded a file named “Great-tailedGrackleIMG_8666.jpg” and iNaturalist offered no suggestions as to what it might be other than something in the crow family. Clearly this name recognition scheme is broken.

How about just adding another “-” instead of getting words together, so system recognizes the full name? Or write all words together, if you already write part of them together you can do that with nothing lost. System is working fine. It should not distinguish space and hyphen, it would make writing common names a mess. Why can’t you just add your own id if you don’t want to change how you name those files?

Seems like the proposed solutions are even more trouble than just typing it in. When I just now typed in “orange-”, adding the hyphen opened up a lot more possibilities.

My point is that hyphens are routinely used in official bird names and they never mean the same thing as a space. By parsing hyphens as spaces, iNaturalist is creating a total mess. The obvious fix is to parse spaces or underscores as spaces and hyphens as hyphens. Is that really too much to ask?

What’s so much trouble about parsing hyphens as hyphens and spaces or underscores as spaces? Prefilling the species based on misinterpreting hyphens leads to bogus, often unrelated species. I much prefer to have the species space blank and let iNaturalist do the job of guessing from the photos. Once I remove the prefilled “Orange,” it never fails to offer Orange-crowned Warbler based on the image details.

Many common names can be written with a hyphen or with space, and you never know what ia added on iNat, for iding purposes it also helps to write short of first word and another and system recognize it, if you had to write hyphen you couldn’t use short words.

I have no idea what you are talking about here. Please read what you wrote and try again in plain English. However when it comes to my field, birds, there are no options to use hyphens as spaces. The English names are standardized and there are rules about where you use hyphens and when you use spaces in American convention.

Why are you arguing about this very simple bug. Just fix it and stop pretending that your scheme is working as intended. It clearly is not!

Can you write in plain polite English then? I explain you the iding process on iNat, nothing hard in what I wrote, reread it if you have difficulties. I can’t fix anything, nobody forces you to name files with birds names, if you can’t change the name because name rules it’s ridiculous, your file names are not official documents, that’s not a simple bug, system can’t recognize “tailedGrackleIMG” as a word because it’s not human and it’s not coded to do so.

I have no idea what you are talking about here. Please read what you wrote and try again in plain English

Hi Joseph, this comment was flagged by multiple members of the community as inappropriate. Remember that people using iNaturalist come from all around the world and for many English is a second language. If you don’t understand what was said, you could ask for them to rephrase it politely.

It should distinguish between a space and a hyphen.

Many people store files with hyphens used between every word in the filename, so hyphens won’t be changed to be interpreted only as hyphens on iNaturalist.

I’ll close this topic as there aren’t any technical bugs present and the question has been answered. If you have a proposed new feature in mind, you can open up a topic in #feature-requests.