What should your state's bird be?

For iNats in the U.S., how do you feel about your state’s official bird? I recently analyzed all U.S. bird observations in order to nominate a unique state bird for each state. I describe the details of my analysis in a this substack post: https://samallonthesciencemon.substack.com/p/what-should-your-states-bird-be

The results were quite different from the official state birds! 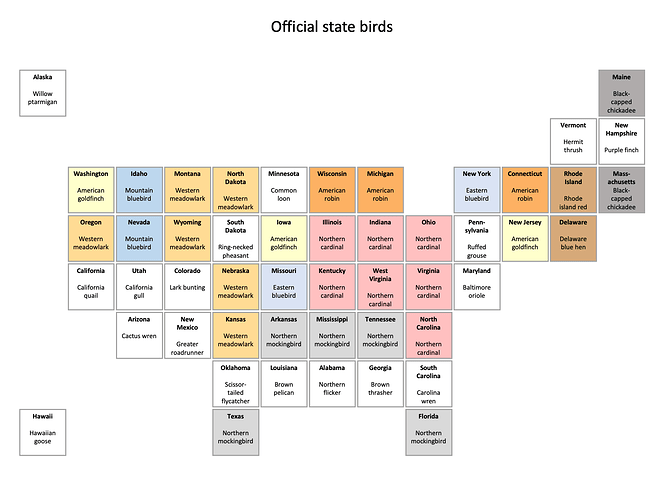 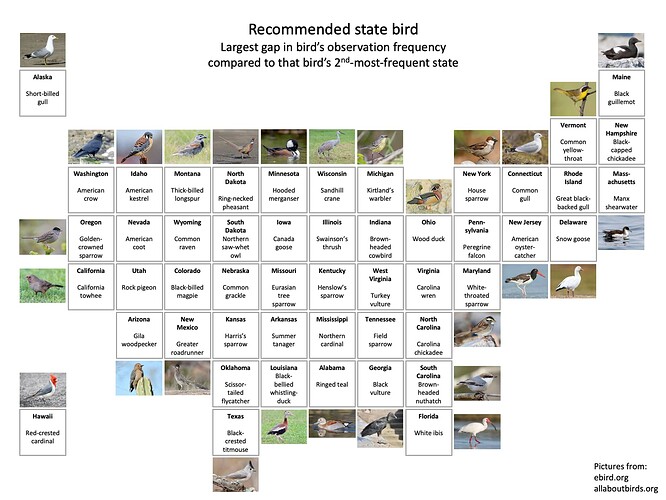 Do you approve of my suggestion for your state, or do you prefer to keep things as they are?

I can’t seem to read more than the first paragraph of your substack post without signing in–not going to do that. So perhaps you could put a few more words here around how you determined your suggestions for revised state birds? It’s not entirely clear to me from the legend on your figure.

Hmm…I’m not from Hawaii, but I doubt they’d be too enthusiastic about having the Red-crested Cardinal as their state bird. Similarly, New York may not like House Sparrow.

I’m quite fond of my state’s (GA) current bird, Brown Thrasher. They are my favorite backyard bird! Though your suggestion of Black Vulture is also cool.

Sorry about that! Have you tried clicking “Let me read it first” ?

I’ve always felt that NV’s should be Horned Lark, or Golden Eagle. Mountain Bluebird is fine, but having a state bird shared with another state is BORING (I’m looking at you, Western Meadowlark, Northern Cardinal, Northern Mockingbird). I’ve also always felt that Vermont made a fine choice.

How did Alabama get Ringed Teal?!?

i hate that the florida state bird isnt the scrub jay. its been requested lots of times but never happens. theyre endemic to florida and could seriously benefit from the status because theyre under such severe threat from habitat destruction. but out of ALL the birds we have in florida, the mockingbird? seriously? at least the white ibis feels more evocative of florida than the mockingbird which multiple other states use

Maybe there is a better way of calculating state bird? My method was my best shot and produced lots of reasonable answers… just not for Alabama.

It is odd Utah has the California gull. That is because of the large wintering population at the Great Salt lake. But the lake is shrinking. But Rock pigeon? LOL you must not like Utah.

Haha I have nothing against Utah! If anything, it looks like someone in Utah really likes posting rock pigeon pictures to iNaturalist!

I like your suggestion for Washington. Goldfinches are great, certainly, but they aren’t particularly common (as far as I’ve seen, anyway). Crows are ubiquitous in a variety of habitats and have over quadruple the number of observations - plus, they’re corvids, which are intelligent and interesting birds.

I sure do see a number of common ravens here in Wyoming. But even though they are cool, smart birds, I’m not sure they feel distinctively Wyoming. I’m definitely game for moving to something that 5 other states haven’t selected. Since no one else has claimed Sandhill Cranes, maybe we could campaign for those.

For Utah (my former home) the gull has cultural significance, so good luck talking them out of it.

Maybe there is a better way of calculating state bird?

I know Matt Smith did something similar to your methods, but using ebird data:

Every so often this issue of the state birds comes up, and we all flail around for a while and no one leaves happy. Well, it’s time to end that once and for all by letting Science! have a say. I have compiled a new, fully data-driven list of avian emblems for each state, province, and territory, using these unimpeachable methods:

I can’t seem to find where he’s posted the final list, though.

As a Rhode Islander, I think that the great black-backed gull is better than the Rhode Island red hen. Chickens are native to Southeast Asia, and gulls are, of course, native here. We’re called the ocean state for a reason, and gulls are very fitting. Ospreys (which I think are the better candidate) and ruby-throated hummingbirds were a possible state bird, but were beaten by the chicken in a vote. That being said, I think that the Rhode Island red does give our overlooked state more publicity, as it is one of the more common breeds of poultry.

Greater Roadrunner is the perfect state bird for New Mexico. They’re iconic, charismatic, not that hard to find, and one even hangs out in my neighborhood and was in my yard just today.

I agree with Colorado’s suggestion of black billed magpie and it was my first thought when I read the title of this thread. It’s much more common than lark buntings.

Colorado should use the Brown-capped Rosy Finch, since it’s a breeding endemic and emblematic of the Rocky Mountains

Coming from Illinois, I do have a problem with the idea of a state bird that neither nests nor winters in the state. Northern Cardinal is rather boring, but it’s noticeable and always present… Henslow’s Sparrow do nest here, and they’re not found in a lot of states, so that might be one. If we’re going to go with a migrant, I think American Golden Plover would be a good one, since so much of the population migrates through Illinois.

This is an awesome post! But I do feel as though this is something that would be better calculated by eBird than iNaturalist. Personally, I have very different mindsets when using the two, which is encouraged by the UI of the sites themselves-- on eBird, I’m recording something closer to true abundance, where I’m trying to record every individual if possible, and certainly record every species I see (or hear). On iNaturalist, I am uploading what caught my eye (and rarely my ear), which tends to be either the less common species or a particularly good/notable showing of something common. For the same outing on iNat, extremely rarely will I upload multiple observations of the same species. I feel like using iNat as the dataset would skew the outliers up, as well as bump the widespread-but-not-the-most-common species. I also think there’s merit in showcasing species endemic to a limited area, whose observations won’t necessarily outpace observations of common species but are still notable within the state. Similarly, iNat will also lose some of the more elusive species and skew towards birds well-photographed, as most people using iNat will upload pictures rather than sound recordings.