What should your state's flower be?

Inspired by the What should your state’s bird be? topic I tried to do the same thing for flowers instead of birds. One thing I had to realize is that “flowers” is less defined than “birds”. Is it all plants? Just vascular plants? Just flowering plants? Just insect pollinated plants?

Anyway, here’s my map with the offical state flowers (red ones are duplicate): 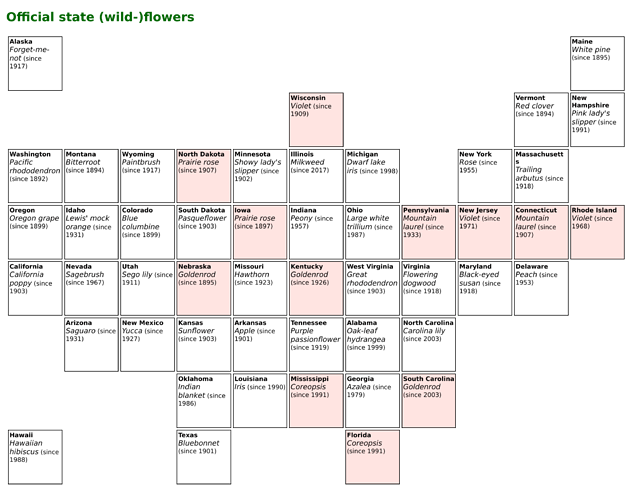 Here’s a map with the flower for each state where the state has the highest inaturalist observation percentage of that flower compared to other states, and it is the most observed such flower (yellow means it’s also the most observed flower within the state, green means it’s the same as the official state flower, blue means the official state flower would have been an alternate pick): 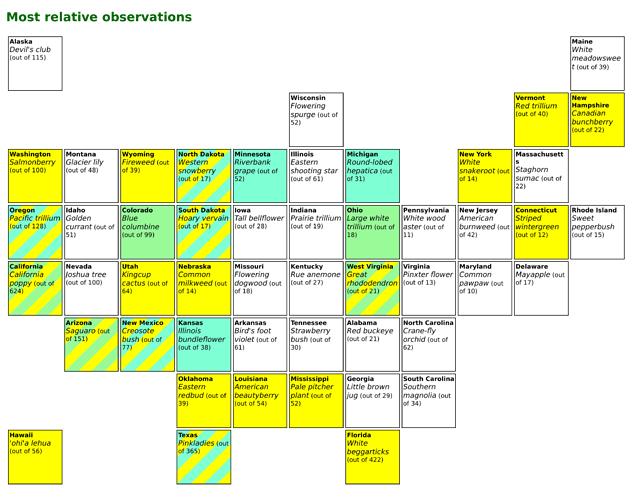 And finally the result of running the same algorithm as in the bird topic, picking the flower from each state which is both most observed compared to other states and also has the largest gap to the state with the second-most observations: 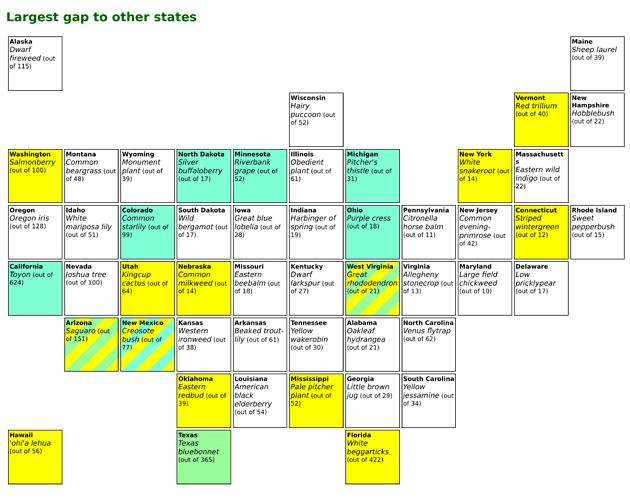 I also made a journal entry with more details: https://www.inaturalist.org/journal/elias105/72597-what-should-your-state-s-state-flower-be

I don’t like creosote for NM because it only covers half the state and isn’t a unique plant among neighboring states. Probably Pecos sunflower - famous endemic - or globemallow, or maybe Phacelia (P sivinskii is a nice endemic). I’m sure @jnstuart and @aspidoscelis and @ellen5 have ideas other than Yucca, which was already good.

For Utah, Penstemon is my pick. It’s the most diverse state for the genus, with more than 70 species and many (near-)endemics. They could use Penstemon utahensis or the genus in general.

Agreed. I like Yucca (whichever species) since it’s statewide and often planted in xeriscaped areas. Creosote bush is a neat plant but less symbolic of the state.

Added comment — my introduction to NM as a kid when my family was moving to the state from back east was a yucca. We stopped just inside the state line and I saw this interesting plant that I stuck my hand into, not realizing the leaves are stiff and sharp. Welcome to the spiny flora of the Southwest!

Alabama’s state flower is Camellia because the garden idiots voted for it.

It used to be Goldenrods but people decided it caused allergies and the garden people vied against it with a smear campaign. Nevermind Camellias are not even native, 'bUt ThEy’Re PrEtTy"

Currently there is a petition to change it back to Goldenrod

I dislike that Georgia’s official state wildflower is a genus, azaleas, rather than a specific species. They even revised it in 2013 to specify they were referring to native members of the genus. We also have an official state “floral emblem”, the Cherokee Rose (native to Asia, invasive in the U.S.).

I like your suggestion of Little Brown Jug. Some naysayers would complain that they are “ugly”, but they are common in the state and unique flowers with pretty foliage. Plus they have a cute yet descriptive name!

For Virginia, where I grew up, I like the suggestion from your “most relative observations” map. Pinxter flowers are gorgeous and relatively common throughout the state. Ironically, they are one of the “native azaleas” that supposedly would be included as Georgia’s state flower(s).

I like your suggestion of Little Brown Jug. Some naysayers would complain that they are “ugly”, but they are common in the state and unique flowers with pretty foliage. Plus they have a cute yet descriptive name!

Ohh, looking at the pictures I love them and hope to see them one day. In Ohio we have two flowers which look similar, Canadian wild ginger and Virginia snakeroot and they are two of my absolute favorites.

Yeah, in theory I could have added some logic to allow genera instead of species in some cases, or something like tribes. But yeah, you have 25 species of Castilleja - Ohio has only a single one.

I did not know that, I found a list of state flowers on Wikipedia but that must not be up-to-date. I do like the idea that each state has an official flower, and some also an official wildflower - but it’s surprisingly hard to find information about them. Many of the Wikipedia references were actually dead links so I gave up on double checking them.

I’m quite happy with the state flower of Colorado! The species has a range centered in the state and has very charismatic flowers! Some good species I could see fitting in would be some of our endemic plants like Physaria bellii, or Castilleja puberula, but I think the Blue Columbine holds the title best!

?How did you say you defined flower?

Fun topic! Thanks for putting it together.

The lore for Minnesota’s state flower has it that the state wanted an official flower ahead of the 1893 World’s Fair in Chicago and a small, unrepresentative group chose a pretty bog flower.

Apparently, popular opinion wanted pond lily, “eminently the most beautiful and popular, as well as one of the most common wildflowers in Minnesota, and decidedly the most characteristic flower of this lake park region of the continent.”

Riverbank Grape, which your algorithm identified, fits an aquatic theme, and we are the headwaters of the Mississippi River, which runs through both Twin Cities. We are unsur And the plant is widely distributed through the state; we have found it in prairies as well. The identity of the state might be tied to “The Land of 10,000 Lakes.” Minnesota loosely translates to “sky blue waters” in reference to lakes. The science might lean toward grape, while we are unsure that sentiment would

?How did you say you defined flower?

I started with Angiospermae (which already excludes the Maine state flower which is in Pinopsida). Then I ran the algorithm a few times and manually excluded families that seemed entirely wind pollinated - like Fagales (otherwise several states had beech and oak trees) and also excluded all of Poales (e.g. blue stem grass, often observed). If the US had a lot of the more showy bromeliads that would not have worked obviously, they are in Poales but have showy insect pollinated flowers. Then finally for things like Rhododendron or Rosa (including Toyon) - they are woody/shrubby/small trees but a lot of states use azaela/apple/peach/rose/… as state flower so I didn’t want to exclude them. Just the limits of using an algorithm - all I had is observation counts, but equally important would of course be whether the observer considered this “a flower” or just “a shrub” or “a grass” or whatever… it’s much easier with birds :)

Ah… Well, I’m sure, toyon have genuine flowers though they are not widely admired. The vast majority of toyon observations feature the attractive fruits. The shrub is also as known Christmas Berry for it’s bright red winter berries.

Anyhoo, it would be sort of akin to saying your favorite flower is a grape. I don’t know how you might tweak your algorithm to exclude Toyon.

I actually tried using the phenology data, only considering observations marked as blooming - but they are not filled in consistently enough and therefore lead to some strange results as well.

as with Minnesota’s result lol

Now that I have relocated to North Carolina, I do like the Venus flytrap. That is a plant that easily captures the imagination of people everywhere. The funny thing is that you can be in habitat full of Venus flytraps and never see them because they hide underneath the bunch grass.

And for my childhood home in Rhode Island, sweet pepperbush is a good choice too.