What should your state's flower be?

I’m ashamed to admit that I didn’t even know that this local endemic existed. Will have to look for it next year.

I’m pretty happy with Eschscholzia californica for California since it covers a large part of the state. The only other flower I can think of with more coverage is maybe Tribulus terrestris, but it’s non-native, problematic, and maybe some else would want to claim it.

This one was near Atrisco Heritage Academy high school 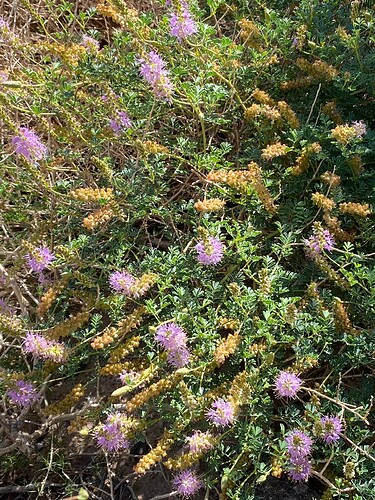 Canada’s provinces and territories each have an official flower, and most have a long-standing association with the area. For example, the Pitcher Plant was part of the design on Newfoundland’s 1-cent coins for more than 70 years (1865-1938). These are all sensible choices and I wouldn’t change any of them:

Wow, that’s a nice list of wildflowers. Being from Ohio I actually have seen most of those flowers. (Except for the west coast ones and the Pulsatilla). They all seem like excellent choices! Do you know if Canada has separate “state flowers” and “state wildflowers” like the US? Otherwise I’m kinda jealous that you have such good state flowers (but can’t complain for Ohio, they have Trillium grandiflorum like Ontario).

I just looked up the “national flower” of my birth country Austria, it is Leontopodium nivale which is also a very sensible choice and I saw one there a few years ago high up on a mountain peak!

Very neat map. I think Red Trillium would be neat for Vermont but a little bit obvious/less specific to this place. I’d love to see the sugar maple catkin as our ‘flower’, it is unconventional but so is Vermont, and that species is uniquely important to us amongst US states (though obviously very important in Canada too). And i see Ontario and Quebec have not gone for sugar maple either :D

(though looking at the maps we really do maybe have way more red trillium than others, i’d be happy with that one too)

Do you know if Canada has separate “state flowers” and “state wildflowers” like the US?

Even in the US it’s a state by state thing. California only has one flower. Although we also have a state grass, fruit, vegetable, and three (why?) state nuts.

Do you know if Canada has separate “state flowers” and “state wildflowers” like the US?

So far as I’m aware, no, the only official flowers are the species I listed above.

Surprised by the last one, but here’s a news story and it possibly also belongs in: Tomatoes, berries, fruits, and vegetables - discuss!

Having visted the Washington State Capitol in Olympia, I recall that the carpeting is decorated with images of Pacific dogwood in the Senate chamber and western trillium (Trillium ovatum) in the House chamber.

Although I believe that the leaf on Canada’s flag is meant to be that species.