Why do katydids try to munch on us?

This is a somewhat silly observation but one that has caught my attention over the years. I have had countless instances where katydids of many species, while in the hand under no duress, start chewing on my finger. Luckily Nearctic species don’t have mandibles powerful enough to do any damage, but they seem quite adamant about thinking I’m something worth eating and will keep at it, even after being disrupted once, twice, more…

And it’s not like they’re trying to lap up sweat - they sometimes break the skin!
I’m just curious if this happens to other people, and what your ideas are as to the reasons why katydids might exhibit this behavior. I’ve noticed it’s often females - might it be driven by a need for protein for egg production?

I’ve only seen katydids twice. The first one I randomly found on my ankle while outside, inexplicably biting me. The second time my cousin tried to handle one we saw and threw it off after it started biting her hard.

So yeah, I think you’re onto something, lol. No clue what explains this. If they are habitual flesh-eaters that is kind of frightening!

This one wanted to eat my finger, too! I didn’t realize this was a thing for them.

That’s an interesting aspect to me, although i am surely all but experienced about Katydids and Insects in general. Since i do know the name “Wart-Biter” i supposed (lacking knowledge) these Katydids would aggressively defend themselves when getting caught, (and might have been used to remove warts ?? - unbelievable, indeed!).
At German Wikipedia i found this explanation to Wart-Biters: “The rather strange name for locusts is based on the fact that the animals used to be allowed to bite warts, as it was hoped that their caustic digestive juices would have a healing effect.”
Another story in translation: “As these animals are very vicious; so you have to be careful if you want to catch them: then where they find the bare skin, they tend to bite so sharply that they immediately bleed. At the same time, a brown juice flows out of her mouth, which is nothing other than the food that has been transformed into a liquid substance in the front gullet.”
Perhaps these insects don’t bite to defend, but rather to eat as human skin seems to be attractive food to them. Luckily we got an advantage as those Katydids are way, way smaller, we better not imagined what happened otherwise -ouch!! 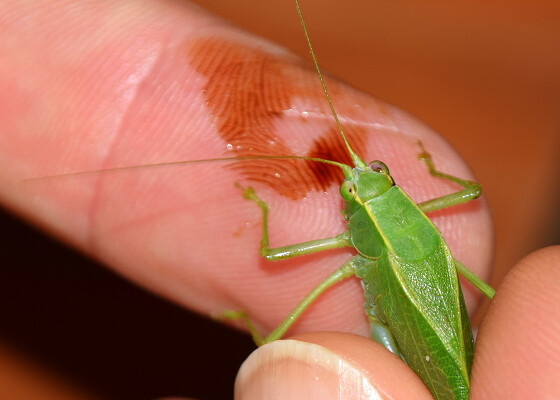 Not a katydid, but a cricket. It was a nymph so not looking for protein for eggs. It hopped onto me. I didn’t handle it so not defending itself. I as photographing it on my hand and it straight up started chewing on me. At first it didn’t seem a problem as the cricket was tiny and I had some dry skin, but then it continued and it started to hurt so I shook my hand to get it off.
https://www.inaturalist.org/observations/82094115

As far as I know, most katydids are omnivorous scavengers, willing to eat dead insects, and many tropical species are predatory (and with the mandibles on those, they could probably take a whole chunk out of my hand!). So their consumption of animal protein has precedent, but why they’d seem to include living skin in the tasty category is curious to me! The example I posted above, that individual nibbled on me for over ten minutes straight. It did eventually start to hurt after it went for my knuckle!
Generally they only release those brown digestive fluids as a defensive response when grabbed (same for other orthopterans). I haven’t yet experienced that when they’re freely choosing to chew on me.

Are you sure it wasn’t trying to get salt as other insects do, but just couldn’t do it gently with such mandibles?

I suppose I couldn’t know for sure! But all the times this has happened, they seem to be intently trying to pierce the skin, sometimes succeeding until it causes pain. And during these instances, I’ve never been particularly sweaty either. They just seem to enjoy gnawing away…

In my opinion there’s honestly not much to it besides “tastes like meat”. Yes, they’ll eat dead bugs, but they’ll also eat live eggs and moribund bugs, and your finger’s not all that different from a moribund bug.

I myself have been the attempted meal of Armadillidium and various tenebrionids. They certainly weren’t too interested in the salt - when I offered them unsalted food items they often began consuming those instead of my skin.

Many invertebrate-rearing enthusiasts also report being chewed by other omnivorous grazers, such as diplopods and roaches.

I got bitten very hard by this fella: https://www.inaturalist.org/observations/11169764

My first ever encounter with such a large species of Katydid, and one I won’t soon forget

In this instance, I was handling the Katydid quite a bit so one could reason that the bite was in self-defense. Wouldn’t have a clue why an unprovoked Katy would enjoy biting humans…?

Yeah, that sounds like they’re just eating you! They’re hunters, so it seems you’re tasty enough.