If I go to Explore and sort by species, it lists 500 individuals.
Based on the number of species, I should be well-within the top 500 individuals but I am not listed.
Given that individual #500 has only 112 species, I suspect A LOT of other people with more than 500 species are not included in this list.

Hi @virusmanbob and welcome to the forum!

Could you please provide a more specific example, including URL links?
I also don’t understand the connection between top-500 taxa, and the ranking of a person. A screenshot might help.

I think @virusmanbob means this tab on that page:

It could also depend on how iNat are counting species in that particular situation. A detailed breakdown of the different ways is given here: https://www.inaturalist.org/pages/how_inaturalist_counts_taxa

i tested this and it appears the Observers tab defaults to show the top 500 people based on total observations. When you change to sort by “species”, it doesn’t show you the top 500 people with the most species, it just sorts the top 500 observers that it initially called by a new criteria. Since you only have about 2000 total observations and the the 500th place observer has 7000+, you’ll never be displayed here even if you have more total species than some of these people.

This is what I surmised, but in my way of thinking this does not make any sense. Using this rubric, one could put in 100,000 observations of the same species and that person would be still be ranked 500th in terms of the number of species. Why even bother having a species total ranking since it devolves to meaninglessness???

Maybe it’s not a “ranking” as such? Maybe just a means to sort the list? But it still seems a pointless thing to sort on. It would be interesting to hear from anyone who does use this and in what context they use it!

The number of species is far more interesting that the number of observations. How many birds do you know who are interested in how many times they have observed a robin? Or people who photograph butterflies - do they strive to collect as many shots as they can of the same species?

The number of species is far more interesting

I marked @psyllidhipster’s post as a Solution because this isn’t a bug, it’s working the way it’s designed. Please make a feature request if you want a way to see a list of the observers with the most species, although if you want it to be done on the Explore page, might be best to just add it to this thread: https://forum.inaturalist.org/t/ideas-for-a-revamped-explore-observations-search-page/8439

@tiwane
I am confused by your response.
Everything on a computer works the way it is designed. That is what computers do.
Also it is not a solution if it does not solve the problem.
The problem is:
The program says it is ranking people based on the number of species. It is not.
The program does not say it is ranking the top 500 observers based on the number of species.
And even if it did, that does not make any sense as I explicitly pointed out.

A bug means that something is not working the way it was designed to work. After talking with our developers, it looks like this was originally designed to what it’s currently doing - we didn’t have a way to sort observers by species count at the time, so this was a way to achieve at least a half measure. The issue, to me, is that the user interface is not making that clear.

Semantics aside, we can now sort observers by number of species, I’ll make an issue for our developer team.

THANK YOU!
I look forward to this addition.

Just to clarify the semantics.
I never said this was a “bug”.
I did view it as a “problem” from my perspective.
And I did not feel that the initial response represented “a solution” to my perceived problem.

And another opinion.
Through its rankings, iNaturalist does a wonderful job of gamifying the collection of observations from individual projects and outings all the way up to the world at large.
It is my opinion that ranking by total species or species within a category is far more motivating than restricting that ranking to the most prolific observers. Just my perspective.

Just to clarify the semantics.
I never said this was a “bug”. 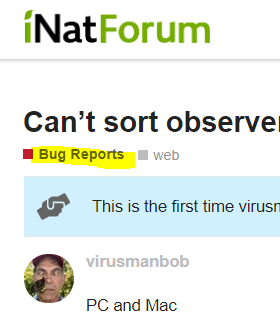 I added the suggestion to the Explore page revamp discussion: https://forum.inaturalist.org/t/ideas-for-a-revamped-explore-observations-search-page/8439/102

closing since it’s apparently working as it was designed