Colour Variation in Grasshoppers - Why?

The Carolina Grasshopper in a species I see all over the place. Usually, they are shades of grey. However, it’s not too uncommon to see a yellow or orange one hopping about too. But why is that? I’d like to know why there is such variation in colour between members of a species that all occupy the same environment. It seems this trait is also shared with other species in the genus Dissosteira.

Pigment plasticity is the term I’ve seen for this. Color changes can happen after each molt as the hopper matures and it might be tied to the different microhabitats the insect is using as it matures or changes in diet. Serotonin also seems to be involved in triggering swarming behavior in some species with concurrent changes in appearance.

Any given habitat isn’t uniform. There are always new leaves, old ones, variations in shape, size, color, etc.

In addition to many species, in particular those in the locust family, having a great deal of phenotypic plasticity at different phases of their lives, and in response to external factors (such as population density) many species "hedge their bets’, as it were, when it comes to coloration with a certain portion of their population having different colors than the majority.

This sort of strategy is often talked about in evolutionary game theory: imagine that most of the population is green and a predator learns that the green bug is good eating and passes that knowledge along, either through others learning, or via evolution. The portion of the prey population that is brown then potentially has a survival advantage as it doesn’t click the predator’s “this is preferred food” trigger.

For a species to adapt to a changing environment there needs to be variation within it. Without that variation adaptation is difficult to impossible.

A classic case where having that color variation built into the population was demonstrated to be of critical importance is the Peppered Moth (Biston betularia) in the UK. Originally the majority of population was a pale color, kind of speckled white-gray, but as the Industrial Revolution came rolling along the pollution meant that the light colored majority of the population was no longer camouflaged and faced higher predation, but the darker colored ones now had a survival advantage, and they became the dominant morph.

If the initial population hadn’t had some members with the atypical color variation then this adaptation would have been unlikely.

This doesn’t mean that evolution is planning ahead or anything like that, just that there is a survival advantage in many species to have a portion of the population with a different color, or behave slightly differently, or to ripen or flower at a slightly different time, etc.

to ripen or flower at a slightly different time

also why local farmers collecting seed varieties for their crops, is more important than Big Ag’s GM one size fits all NOT approach.

My questions have been answered! As a side note, the grey variation of the Carolina Grasshopper seems to be the dominate form in my area.

Here’s a good example of what I’m talking about. 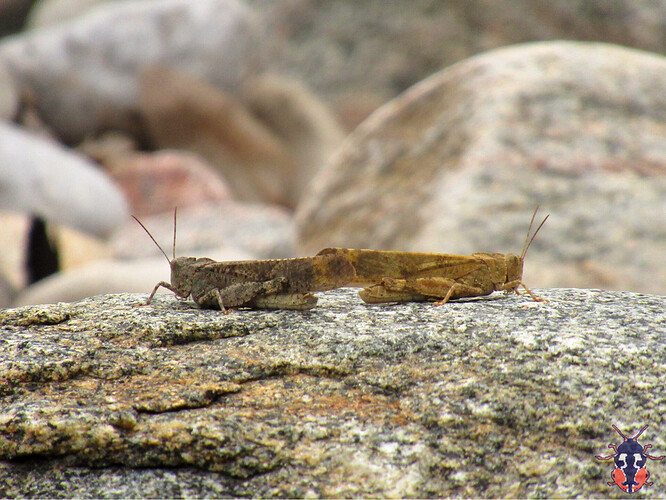