Here in Yucatán, where I live, Maya is also an official language because for so many, it is their first language, so all official documents and communications come in both languages. And because the culture is so deeply engraved, even for those of us who do not have Maya as our first language, there are certain things that we just use the Maya word, things that I actually do not think have Spanish words, like xcatic, which is a type of pepper. Everyone just calls it xcatic, even in other parts of Mexico. (“x” is pronounced like “sh” if you want to try it out.)

I think this pepper does not grow outside of Mexico because it is fundamental to regional cuisine and whenever we have traveled (or anyone else) one of the big discussion points is, “What did you substitute for xcatic?” And I have pawed through innumerable chilies in search.

I cannot tell you the scientific name for xcatic because when I go into naturalista.mx, which is the platform here, and type “xcatic”, nothing comes up. 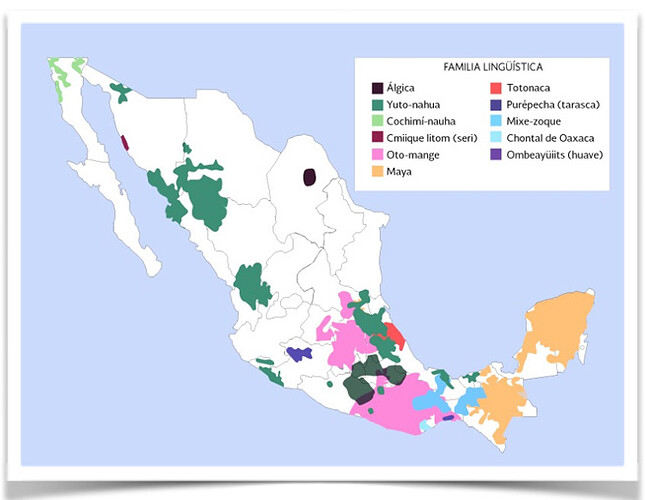 Well, Google tells me this is one of the cultivars of capsicum anuum (https://worldcrops.org/crops/xcatic-pepper). You can go ahead and add xcatic as a common name for that.

Of course this just highlights that inaturalist isn’t meant for cultivars, and doesn’t draw a meaningful distinction between jalapeno, xcatic, etc. But there is no reason why the name can’t exist here.

“What did you substitute for xcatic?”

Are these not different subspecies that have developed? (Forgive me, my non-scientific background is showing.)

I do not know how to add a common name, and I would not like to add xcatic if it gave the appearance that was the word for all Capsicum annum.

The recipes in which these are used go back an incredibly long time. Chawa(k), a different pepper here is used in a dish called Boom K’óol (relleno negro), a traditional dish which the last few days I have seen on many family ofrendas for Hanal Pixán, which is a maya tradition predating the Spaniards’ arrival.

On iNat there’re three varieties, but they differ by shape of the pepper, I google one you mentioned and it’s of a typical shape for the species with different colour, I don’t think it’s enough to be something more than a cultivar, but it’s honestly enough, most unusual tomatoes and cucumbers don’t have any var. to back their unique appearance.

Appearances of fruits may be similar, but I wonder about the rest of the plant, if the leaves are different, if it grows the same height, all of it, because they all taste very different. (I wish we had taste-o-vision!) Sometimes people will think xcatic is a banana pepper but it is not. It is smaller, less hollow, it “bites” at the end but is not hot (at least to me?) and is not a sustained bite and it pairs beautifully with creams.

I buy most of our produce from a mobile vendor who comes by in the mornings, but the next time I go to the mercado (we have groceries, yes, but they do not grow the food so will not know), I will seek out the xcatic sellers and see if any of them have xcatic plants or know another name, because now I am just extremely curious and to be honest, like most people I just buy them. (The mobile vendor gets his variety of fruits, vegetables, garlic, chiles and sometimes horchata from the mercado himself or I would ask him.)

So I backtracked off the very helpful link @schoenitz posted and found the BEST page about diversity and distribution within Mexico of succulents, chiles, fruits, chayotes, and avocados. These are from SAGARPA: the Secretary of Agriculture and Rural Development (plus fishing, I believe?).

According to SAGARPA, within Capsicum in Mexico, there are 5 cultivated species and around 25 wild or semi-cultivated. There are 64 different types and where each falls, I do not know, but I do know that even on the map you can see there are peppers here on the Peninsula that are not anywhere else. SAGARPA mentions the most economically important ones and notes these are produced in the center and north of the country, and these I believe to be the most likely to be cultivars.

I think those that are less commonly seen might be the ones SAGARPA has found to have grown “silvestre”, including some here. 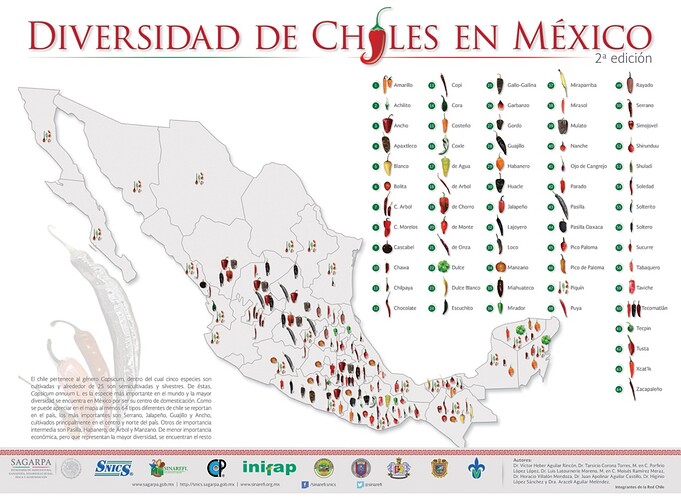 This should probably move to a separate thread (@cthawley please?)

Where are the Chilhuacles and Chilcostles? Are they entirely separate species or simply overlooked on this map?

P.S. Mexico is super underrated for cultural and biological diversity in my experience as an American. People here only travel to resort towns or CDMX and miss out on the other 28 states.

I am so sorry! I was going off of this very excellent suggestion:

Traditional/indigenous names are best when we have them, if and only if said people WANT us using them which may not be the case

And then got caught up in “is this wild or a cultivar?”. I am still not sure. I just am clear that I call it one type of pepper a “xcatic” (but not all peppers!). :)

I apologize for the derail. Carry on!

Are these not different subspecies that have developed? (Forgive me, my non-scientific background is showing.)

I also don’t know the answer to this question. Very few references (that I could find (*)) treat it as a variety, most just treat it as c. annuum. This suggests to me that it’s a cultivar, so something that has been bred and not something that has evolved. It would be possible to make the taxon “capsicum annuum var. x’catic”, though I would hope others who are closer to the subject matter could weigh in.

But all this should probably go in its own thread.

(It is OK. I very much doubt it is interesting for its own thread and I think answers about xcatic specifically are more likely to be found among Spanish language/ Mexican research materials. But I so appreciate you heading me off in a helpful direction!)

Moved from Common Names post at request of OP.

It wasn’t actually the OP who made the request but it is OK. :)

I was only making the point that in some places indigenous “common names” indeed exist for native plants and insects and all manner of things. (This is a tolok.)

And in some cases there are things for which there is no other word in Spanish, nor or English, so the indigenous common name of course should be used, unquestionably, because nothing else would make sense. If you called that thing anything else within its native range or country of origin, everyone would be confused.

There are other examples; I just chose the first one that came to mind. I had no intention of starting a whole discussion of “Chiles of Mexico”, hahaha!

But it was interesting to see how unknown the variety of wild chiles are outside of Mexico, because only the cultivars grown in the north make it to export. The others are not as economically beneficial.

We also have the wild chiltepin in Sonora and Arizona. I think you started a tasty tangent! Qué rico!

Sometimes, a native name for chiles in general in one language becomes a varietal name for a specific chile thought of as coming from that culture.

In the Ndonga language (Namibia and Angola), the word for chile pepper is ondungu. It may be similar in related languages of that region, because jindungo, as far as I can tell, appears to be a Brazilian term for chiles thought to be associated with Angola, and ‘Jindungo Africano’ is a name applied to a specific cultivar of this origin.

Do you by chance have seeds for this xcatic pepper? Pictures of the mature fruits, pictures of the plants, including flowers, etc? There’s around 43 (?) species of pepper, but only 5 are considered domesticated, being Capsicum Annuum, Capsicum Baccatum, Capsicum Chinense, Capsicum Frutescence, and Capsicum Pubescence.

from the info graphic in a previous comment, the varieites i recognize and know the species of are

Manzano (and Rocotos) are Capsicum Pubescence

almost everything else is Capsicum Annuum to my knowledge, the Ojo de Cangrejo (Crab eye pepper?) might be related to the " olho de Peixe" Aka Fisheye Pepper , which is a Capsicum Chinense ‘wild-type’ as pepperheads would describe it.

Oh, and if the seeds are black it’s Capsicum Pubescence, if they’re white, then you can cross C. Pubescence off your list.

feel free to pm me if you want to talk peppers at all!

Were Ajis introduced to Peru or domesticated there?

My knowledge is more on the growing side, geography is not my strong suit lol, all I know that is that Capsicum Baccatum are from the South American continent in general,

and that Aji just translates to “pepper” so that’s not always an indication of species when talking about variety names,

Here are a few photos, which are not mine but are from local publications and show xcatic. I am still looking for a flower one and one that shows the whole plant. The fruits are light yellowish green, almost cream, when ripe to harvest, and grow darker yellow green (you can tell how fresh they are by how light they are). They are often bent almost at right angles, not sure if that is important. The fruits are about 15-18 cm long? 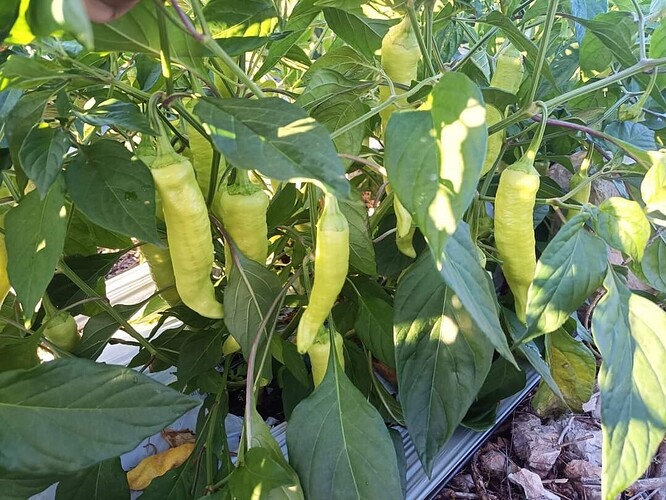 Here are xcatic next to chile dulce, which is another type of chile which if I read the SAGARPA map correctly are grown only in this state and Q. Roo. (They look like small, squashed up bell peppers but taste very different.) 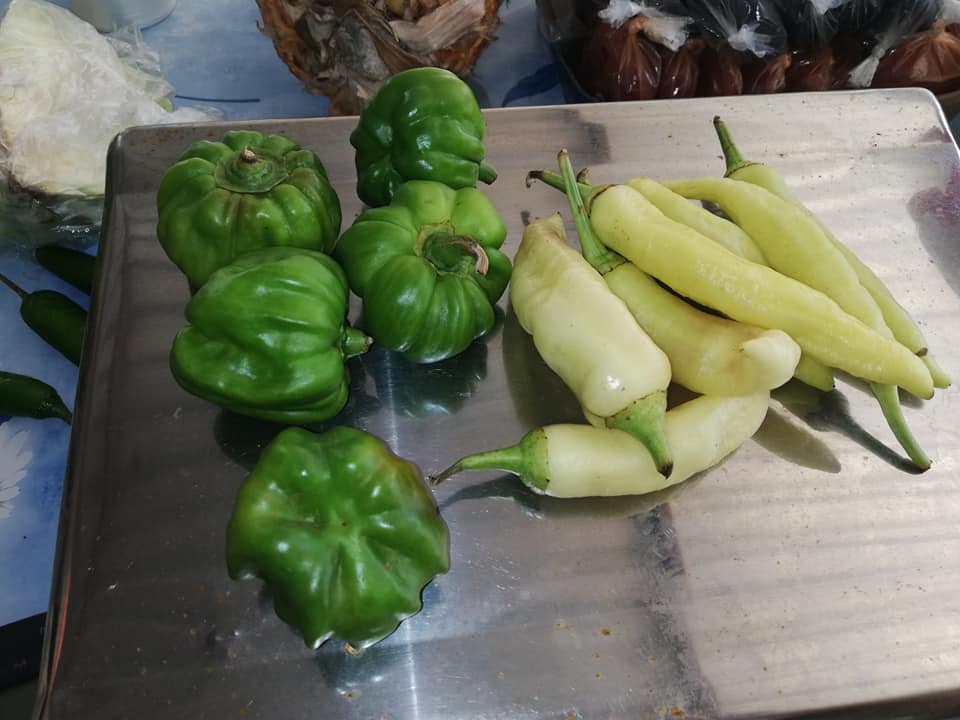 and that Aji just translates to “pepper” so that’s not always an indication of species when talking about variety names,

That’s fair. In my mind, chile is something grown in Mexico (or New Mexico) and Aji is grown in Peru.

Have you grown Chilhuacles or Chilcostles? I’m curious if there are any differences in the plants compared to common chiles like pasilla or serrano.