When I use filter for threatened species it shows me only those observations of Common Oystercatcher that are of the species level and doesn’t show observations of those with subspecies level while they’re considered as Near Threatened too and should be shown in this kind of search. I’m not sure if it’s a problem with taxon status or how filter is working. 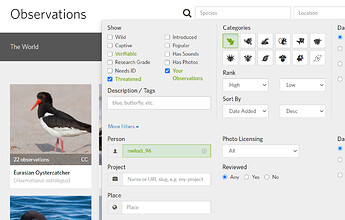 can you add some links? thanks!

Added to my weekly report.

OK, got a response. Right now, when indexing observations for search, we don’t consider a subspecies of a threatened species to itself be threatened, which results in weirdness like this. Definitely something we want to fix (a subspecies should be as threatened as its parent species) but doing so would cause a performance hit due to more indexing being needed, so we’re looking for the best way to do it.

Ok, I’ll mark it as a solution then knowing it will be fixed one day!