I live in the Big City, NYC, so I go to various (partly wild) parks a lot, such as Central Park, Randall’s Island Park, Governor’s Island Park, and so on.

I also really like Plumb Beach and Orchard Beach, but I don’t get to either of them often.

Fort Tilden is very nice, but using public transportation it takes 3.5 hours to get there and back again.

I will also carefully examine any little patch of green anywhere I can find it, even Tree Pits and Traffic Islands.

99% of my observations are in my little garden. But if I had to be elsewhere it is the place I described on the Thwarted by Nature thread:

There is an archaeological zone here called Mayapán where you can climb the structures, and because it is smaller there usually are not many people there so it is a great outing. But if you head to the right of the structures, and go behind, there is a small open area with an entire tapete, a carpet of wildflowers, tiny blossoms of all colors. It feels like another place because you are bordered by the structures on one side and a pretty woods on the other. And enormous Cracker Butterflies fly back and forth there making their wing sounds. It is one of the most peaceful places, impossible to quite explain. May people always go running up the pyramids instead of walking around the sides. 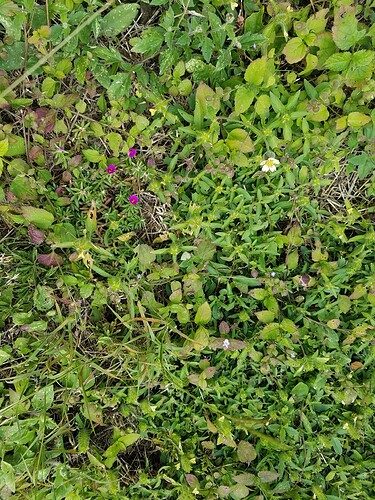 Mayapán (in case anyone ever visits this part of the world)

Wherever I end up, I find something interesting - I found the first and so far only iNat observation of Phaeochoropsis neowashingtoniae while wandering around the parking lot outside the veterinarian’s office, waiting for my cat to have a medical procedure. And I found some rarely-photographed galls in an oak tree in the grocery store parking lot while waiting for my partner to finish buying dinner ingredients one evening.

But I generally prefer going out in the forest far from any people or trails, just because it is much more relaxing to me. I don’t feel like I have to keep my guard up the way I do in more populated places.

There’s some coastal marshes out in Point Reyes National Seashore that I enjoy exploring a lot - it’s a bit of a drive, but I can happily spend all day squelching around in the mud and tall grasses, and never running into another human.

I love Point Reyes ^^ Especially in February when the baby elephant seals are on the beach. I also saw my first California Red-Legged Frog on a hike there, and occasionally I spot a long-tailed weasel.

There are just so many fantastic places out there, and each has its own unique organisms that live there. These four would have to be my absolute favourites though. Some of the stuff I have seen there has been stunning!

Nice! I’ve never seen the weasels out there but I see badgers now and then, and Abbott’s Lagoon is usually good for spotting otters. There’s also supposedly a population of Mountain Beavers somewhere around the Mt Vision area, but I have yet to see one - would love to spot one someday.

I wasn’t iNatting during my camping trip there, because you can’t be “on” all the time, but that was where I saw my lifer brush rabbits.

I used to do a lot more birding than anything else. But, in the past few years, I have been looking for just about anything. This is a result of some of my birding buddies who switch to insects in the late spring after bird migration. I have learned from them and have begun to appreciate what they appreciate. I am especially interested in dragonflies and damselflies.

I used to drive around to the surrounding counties to explore every area/park I could find. But, now I think it is better to explore places closer to where I live to see what’s there. And, it has paid off. I have found a species of damselfly that was never recorded in the county where I live. It is not rare in the surrounding counties, but no one ever found one in the one where I live. And, I have also found some rare and common dragonflies/damselflies in the county where I live in places where people didn’t look in the past. And, others have enjoyed exploring the areas where I have found things. So, that’s cool that I can share those locations and findings.

My local stream, I fish there almost every day.

+1 for Point Reyes! Wildflowers on the Chimney Rock Trail are awesome, and the 2 mile hike to the inlet on Limantour Beach is so peaceful.

Nice! I’ve never seen the weasels out there but I see badgers now and then, and Abbott’s Lagoon is usually good for spotting otters

Grr. I’ve never seen a badger or weasel anywhere, and I’ve been to Pt. Reyes many a time. Some day!

I used to really like the Trinity River Audobon Center but they really cut their hours during COVID and I started working overnights so I can’t make their hours much anymore.

These days I really enjoy the greenbelt in my neighborhood (search my observations, I have a ton of them in it). Good mix of birds, lizards, turtles and inverts. Lousy for snakes though. If I can drive, I really like either Hagerman NWR or Purtis Creek State Park for a mix of wildlife and plants and memories (Purtis Creek helped keep our family sane during lock downs, we could go hike and swim and have a picnic).

Where I really want to be, though, is back at the Cambium community, Dominican Republic. The general region was deforested generations ago, and so the ecosystem has settled into what may be termed “tropical countryside.” It doesn’t have the diversity of a rainforest, but it has enough to keep me occupied for a long, long time.

I do a lot of iNatting around my neighborhood, and it’s great. Still, I think my favorite place is the San Mateo coast, around Pillar Point and the Fitzgerald marine Reserve. There’s cliff top trail between those two areas.

iNat shows most weasel observations along the Tomales Point trail. I had my sightings along the Drakes Estero trail near Sunset beach, but didn’t manage to get pictures. Drake’s Estero is also wonderful for berry foraging at the right time of year. There’s at least 7 different edible species.

Grr. I’ve never seen a badger or weasel anywhere, and I’ve been to Pt. Reyes many a time. Some day!

I haven’t been up there in a while so I dunno if they’re still hanging about, but the best place I’ve ever found for observing weasels is actually Ragle Park in Sebastopol, right in the lawn area near the entrance kiosk. They live in the gopher tunnels under the lawn, and don’t seem to care in the least about all the people around.

As far as badgers go, their tunnels are everywhere in Pt Reyes but they usually don’t come out until dusk. I’ve seen them in the horse paddocks at the Bear Valley Visitor Center several times around sunset.

And one time I got very lucky and caught this fella napping outside its tunnel in the middle of the day, right across the road from the Cypress Tree Tunnel: https://www.inaturalist.org/observations/69609390

Most of my observations are from my backyard and around the house but when possible I try to go to the local beach or walk around the many parks we have.

Personally, to me it is anywhere new.
When I go on vacation there is a local park.
Seriously, I got around 90 observations from there!

Honestly, anywhere that has grass and/or trees. For me it’s more about the time of year! Graveyards are a particular favourite though for sure! They tend to be very quiet and rarely disturbed, so you get a lot of wildlife. I mostly observe mushrooms, and the roots of the usually very old trees, combined with an abundance of decay, provides excellent conditions for fungi. There’s also usually a lot of moss which fungi love.
I went to a graveyard the other day and saw the most amazing array of mushroom species in such a small space. There were many that I had never even seen before, and some I’d never even heard of! (If you’d like to see some of them, go on my iNat profile and look at the ones from 22/10/22)
Also, for those that are interested in small birds, graveyards are also great. I went into a little gap under some trees to get a better look at some mushrooms, and I looked up and realised I was surrounded by tiny birds, singing and unbothered by my presence. Idk what they were but they were so cute :)