What I have realised is that if a species is only threatened in a region but otherwise common, for example house sparrows are critically endangered in Denver, it would still show up

Your idea is very thoughtful, and as a conservation biologist, I can tell you that distinguishing between globally threatened and regionally/locally threatened is of utmost importance (and this is something I’m doing research on).

However, for the iNat purposes, it can’t be implemented in the present moment, although it would be very worth it. Let me explain.

iNaturalist uses the IUCN Red List of Threatened Species, which has set a global standard for assessing the conservation status of any species in the world (not without its faults - a different discussion)

The problem is that the extinction risk assessment is for the species as whole, based on criteria that are mostly related to population size, population declines, and small geographic range. You can check the Redlist criteria summary sheet here:
https://www.iucnredlist.org/resources/summary-sheet

The key thing is that the IUCN does not provide a spatial zonification of where the species is doing poorly, vs where is doing well. This is what is need for your tagging system to work. But in the present moment, it cannot be implement.

Determining which places a species is doing well, and where is having trouble, is a more difficult exercise and is more time consuming. There is also many different ways to determine regional conservation priorities, and they have not been standardized.

Would it be possible to at least distinguish introduced range versus native range? (iNat does have data for that, at least in many cases) It seems very odd for an observation like https://www.inaturalist.org/observations/124721427 to get the endangered tag.

I’m not sure if I understand the request or replies correctly, but iNaturalist uses many different lists of threatened species, not just the IUCN Red List. For example, for the wolf Canis lupus, many countries and smaller regions have different conservation statuses - see the Status tab.

@vengefulcamel can you post a screenshot of where you are seeing conservation status in a search, and what you would like to see?

For the rabbit example given by @jimkingdon, I think conservation status equivalent to Least Concern would have to be added for regions outside the native range, if there is a basis or reference for doing so.

For the rabbit example given by @jimkingdon, I think conservation status equivalent to Least Concern would have to be added for regions outside the native range, if there is a basis or reference for doing so.

That is not currently sufficient – rabbits are marked “Pest Animal” in Australia (equivalent to LC), but still have the endangered badge. 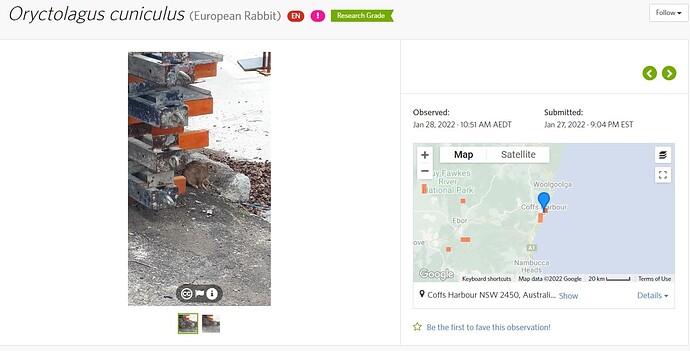 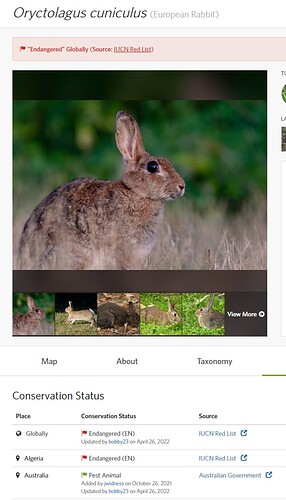 Would it be possible to at least distinguish introduced range versus native range?

iNat already does show introduced – the screenshot I posted from Australia has both the endangered badge and the ! pink introduced badge.

For reference, iNat has 2 or 3 relevant fields of information: Conservation Status, Establishment Means, and maybe Taxon Geoprivacy. These can also interact with taxon rank (e.g. subspecies can inherit from species), and they can interact with location (e.g. a country can inherit a global status).

I think what iNat can do is to make regional status be above global status.

That is not currently sufficient – rabbits are marked “Pest Animal” in Australia (equivalent to LC), but still have the endangered badge.

Interesting. Rabbit is (I think) a very unusual case, in that it is so widely introduced as a pest species, yet has declined so severely in its native range as to appear as globally Endangered. Perhaps in this case, it should have global status removed, and Endangered set only for the three native range countries - Portugal, Spain, and France. That would be a bit of a fudge, as its global status is indeed Endangered, but that status takes no account of introduced populations, and it would more accurately represent the global situation. Anyway, I suggest any furthur discussion of that point be taken to flags on the species page: https://www.inaturalist.org/taxa/43151/flags

I discussed a similar case of Fraxinus pennsylvanica which is introduced and lives in every crack here, but still has the CR badge, and was told it’s still needed to stay because it’s rare in native range, it was pretty long ago, I hope system will change to what you say.

I discussed a similar case of Fraxinus pennsylvanica which is introduced and lives in every crack here, but still has the CR badge

That’s very interesting! Given that the global red list status entirely ignores these introduced populations, it does not seem to make much sense to me to include them in the threatened listing. But there is a philosophical issue here that deserves picking apart some more.

To me in Cape Town just another invasive Australian.
Disconcerting to read that they are threatened at home in Australia since the river is ‘used’ to irrigate cotton plantations.
It makes for a very odd and unhelpful display on iNat

Another solution would be to suppress showing conservation status if the “i” for introduced is present. Are there any cases where that would not be appropriate?

I apologise for the late reply. For example, the double-crested cormorant shows up as “threatened” but only for observations in California 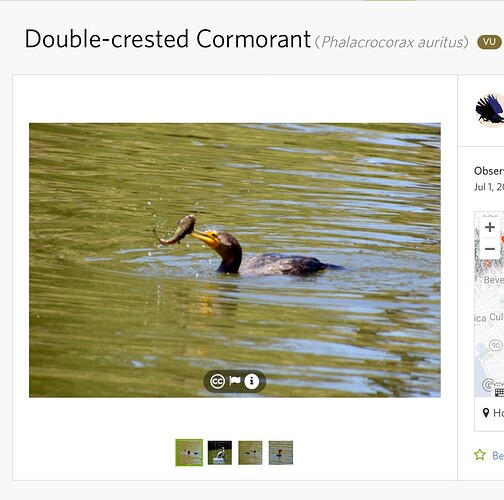 image1218×1206 102 KB
So my idea would be to have two tags, globally and regionally threatened. So if I would tick globally, only species that have been assessed as threatened on a global scale (eg. European turtle dove) would show up, and if I were to check “regionally threatened” species such as the rook would show up, but only in Europe where it is assessed as vulnerable
deboas July 21, 2022, 12:51pm #14

Got it, so these would be options within the Explore/Observation search filters. At the moment you can click the “Threatened” check box and it will show observations that are listed as threatened within the geographic area where they are found (globally for globally-threatened species). Your proposal would be to have two check-boxes, one for Globally Threatened and one for Regionally Threatened. You could create a feature request to get a response from @tiwane and others about how feasible this would be.

One question to resolve would be whether Global status should show only IUCN Red List, or also other global lists such as CITES.

South Africa has Conservation Status for most of our own plants.
So for the river red gum CS is ‘not evaluated’

It is a logic fail to set Introduced (local) side by side with Near Threatened (but, not here)
If displayed as a pair, they should both share the same geography.

Which itself is inaccurate, because while Double-crested Cormorant were listed as a species of concern in California in a 1978 review, they have been un-listed in every subsequent review and no local agency considers them threatened that I’m aware of!

They’re listed as “WatchList” status in the latest iteration of CA Special Animal List (CDFW; 2022), which is reserved for species formerly considered threatened but no longer are (https://map.dfg.ca.gov/ace/docs/CNDDB_QuickView_FieldDescriptions.htm)

So, lots of work to be done on educating iNat staff about how to interpret the various codes agencies around the world use.

They show up with a conservation status tag anywhere they’ve been classified as “near threatened” or worse, which you can view on the Status tab of any taxon page: https://www.inaturalist.org/taxa/4265-Phalacrocorax-auritus

For example here’s an observation of that species in Illinois where it is listed as imperiled due to the NatureServe status: https://www.inaturalist.org/observations/72719846

So, lots of work to be done on educating iNat staff

As far as I can tell, there is no 1978 CA state-based status associated with P. auritus on iNaturalist - can you share a link to the information you’re seeing? Only NatureServe, IUCN, and the North Carolina Natural Heritage Program conservation statuses have been entered for this species. Edit - it looks like you are a curator as well, so feel free to update any statuses that may be out-of date.