How can we encourage people to learn less-IDed taxa? 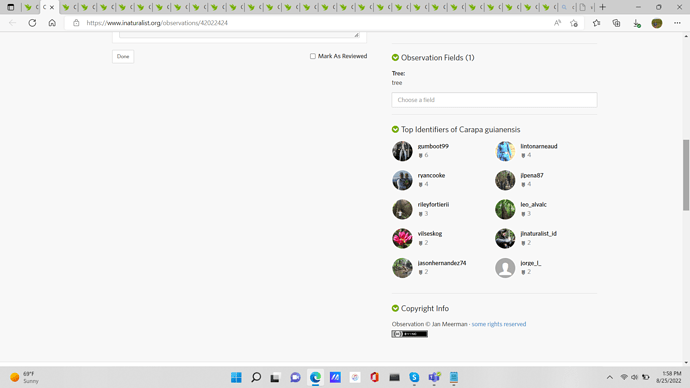 image1920×1080 203 KB
There I am, bottom of the left column. Why? Because earlier today I agreed with two IDs of drift seeds of this species. I can’t ID the tree itself; but having found such a drift seed on a beach once, and being determined to find out what it was, I learned to recognize the seed this species.

Not only that, but you can see that the top identifier of all has only 6 IDs, and the next three, only 4 apiece. Meanwhile, there are 66 observations of Carapa guianensis, and 115 of the genus Carapa as a whole. Now, if a tree species in the United States or Europe had 66 observations, would the top identifier of it have only 6 IDs? We’re not talking some inconspicuos insect here; it’s a tree. And that is the Carapa species with the most observations at species level; the leaderboard for Carapa procera has only six top identifiers, with one ID each, and for Carapa megistocarpa, the leaderboard says “none found”: 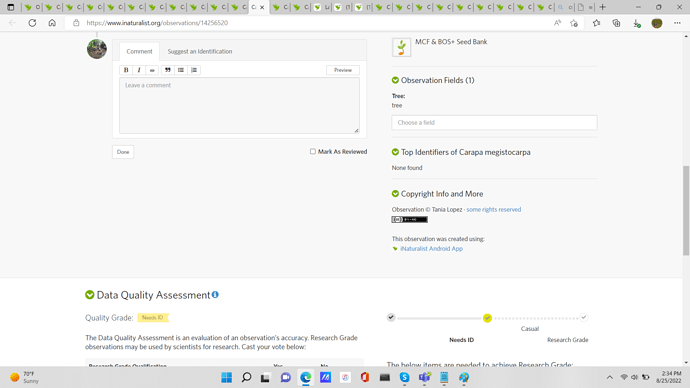 I see that there are a few more observations of just the seeds of C. guianensis, so by the time most of you read this, I will have moved up the leaderboard. How can we address this inequity? If most of us using iNaturalist are from countries and/or socioeconomic classes who have the money and leisure to do this, do we have an obligation to learn taxa outside our own vicinity and contribute identifications for parts of the world less fortunate? How can we encourage people to branch out in this way – especially the most prolific identifiers?

8 Likes
Is it useful to write out my identification steps?
Why are some accounts adding super high level ids to my unknown observations
'Needs ID' pile, and identifications
pfau_tarleton August 25, 2022, 10:14pm #2

I would do so to a broader extent, but I usually don’t have access to sources that allow me to learn how to identify them.

I think we need to focus on locals, observers and identifiers, how to get them on the platform, others if they can – please visit places with no observations, it doesn’t have to be on the other side of the world. I’d say creating new websites under iNat but for developing countries, instead of mostly those with huge amount of observations, from what I’ve read it gave boosts to those countries who got it.
To learn something you need keys, sadly for many places there’s just no keys ever, I tried to id a phalangid in one of countries from tropical East Asia, found out there’s no works with full lists of species, neighbouring country had one where half of species didn’t have any pics and little description plus notes that many species are undescribed, so it seems at least with arthropods it’s almost impossible to id things if you’re not a world expert, and if phalangids are rare objects, I know our scientists come to Asia each year to describe new butterflies and odonata, not so hard-to-see groups.
Problem is also not only in those countries, it’s everywhere but the best-observed regions, as an example, I’m visiting Dagestan this November, I checked an there’s now around 300 observers for all of the time, and in the news I heard there was a million of tourists there this year alone! Where are those people and their photos? Not on iNat apparently.

That is why I focus on encouraging newbies. Even a broad ID can get the obs to someone who can take it further.
My heart is in Africa - so that is where I try to make a difference.

Well since I read this, and since I’ve spent so much time around the (planted) sawtooth oaks here in the state of Georiga, I’d go through the sawtooth oak observations and help identify the ones that need identifying. So now all the ones in Asia that were still marked “Needs ID” are Research grade if they were correct, except a few taken in the dead of winter, since I can’t identify from the bark all the time yet.

Now I’m going through all the observations that need ID for the species worldwide, and then maybe at some point I’ll add annotations to them to mark when they’re fruiting and flowering.

By sharing your keys and other material that can assist in identifying. Especially the ones that can be found online.

I think it’s rather difficult to separate the effects of economic inequality from those of the latitudinal biodiversity gradient, with which they are confounded.

From my own experience as a ridiculously high-volume identifier of ferns, I make lots of identifications of ferns in North America, because there are many observations to identify (due to more opportunity for leisure per capita, etc.). I pretty actively attempt to identify ferns in the tropics, especially the neotropics, but am much less likely to identify them to research grade, because the flora is so much more complex. In the relatively depauperate temperate flora, I can often identify even a potato-grade photo to species because there just aren’t that many similar taxa. In a tropical flora, I generally need a key, which may not be available or up-to-date, and even if I have one (e.g., for Mexico or South Africa), it takes a lot more effort to work through the key to separate many similar-looking species, and I frequently find that key characters have not been captured by the observer and that I cannot identify beyond, say, genus (failing to achieve RG).

iNat is down just at the moment, so I can’t quote stats, but I’d wager that most of the research-grade observations of Pleopeltis (the scaly polypodies) are P. michauxiana from the US, because it’s the only US species outside the Florida Keys. We have plenty of Pleopeltis observations from the tropics, but the bulk of them will never progress to research grade because they don’t show the scale detail necessary to distinguish the many similar tropical species.

Overall, I’ve invested more money (most of it in the past year, admittedly) in learning tropical ferns than my local temperate ferns, but my research grade observations will still skew heavily temperate for the reasons described.

It’s a bit of a chicken and egg problem…

The other factor is that good field guides have a long lineage. One book inspires another and so on, like this:

I think this history has helped establish a stronger naturalist community in these areas and will probably continue to nourish it. Probably in my lifetime, an iNatter will write the 4th book in this installment.

I think material resources and leisure are a big part of it, but maybe in these under-identified areas, there hasn’t yet been a Jepson who created a guide, created keys for taxa, etc. which helps create and sustain the naturalist community.

TLDR: I’m very priviledged to live in an area that has a strong naturalist legacy, making identification easier.

A) able
Similar to what @vreinkymov said above, it would take a reliable key/guide book, and range maps to make me feel able to ID organisms I don’t personally experience. Unfortunately those things usually don’t exist for under-served regions, and if they do exist they might not be in English or I might not know where to find copies. Also my basic university education in plant ID/taxonomy begins to break down farther away from home. I only took one course and it was understandably focused on things I’d be likely to encounter locally. If I get too far away, especially into the tropics, I start running into plant families I’ve never heard of, and I have no idea what characteristics are important for their ID. So I guess some kind of free online taxonomy course would also be useful, but that seems even less likely to exist than good keys.

I’ve spent a few days trying to think of any time I’ve ever ID’d to species a species I’ve personally never seen. I’ve done it, but not often. The one that comes to mind is genus Jepsonia, which contains 3 species: one I’m familiar with, and the other two exceptionally geographically isolated. They’re quite similar looking to each other but the complete lack of range overlap makes it possible to know them all if you know one.

B) motivated
This one’s a bit trickier. I don’t owe IDs to anyone, not even my friends, I just do them because I like it. I think I’d get easily tired of IDing faraway places. There may be an initial period of novelty (oh look at this flower, what a strange shape, how neat!) but I think frustration or apathy would kick in pretty quickly. I’m not well-traveled, and probably never will be. I like my local species because they’re old friends. @dianastuder says her heart is in Africa, and I feel similarly about California or at most the western US.

Free resources, including the kind that don’t require expert terminology or explain it in a way non-scientists can understand. Sometimes the amount of information can seem daunting if people aren’t already interested.

Maybe you could start a thread here or an online group where you promote the taxa you’re interested in and even give people some tips and guidance if you can. Lots of people may not know certain taxa exist, let alone that they can learn more and help with IDs. I, for one, would totally use this as an excuse to learn more about taxa totally outside my comfort zone!

I am also discovering a frighteningly complex layer of diversity between moss and fern where iNat seems to lack more than one or two competent identifiers. (I am at Not a Moss but …)

Any sort of help by taxon or geography here would be hugely appreciated.
You can see from the banner map why my ‘heart is in Africa’ and born here too.

You don’t NEED keys or knowledge to pick out from the Unknowns … lichen … beetle / butterfly / bird or wherever your skill set lies. Once you have the ID pointed in the right direction the notifications roll in. Look out for missing species (in Notes or vanishing Placeholder) which need to be flagged for curation - I have a few most days.

I prefer to avoid adding to the African 39K broad plant IDs as they go here to die in limbo.
Update 22 Sept to 40K.

Well, here’s a suggestion: I live in the northeastern US. In the past month, I spent a week in southeastern Arizona (880 iNat observations), a week at home, and two weeks in the state of Veracruz, Mexico (I don’t know how many iNat observations yet; I literally just got home this morning).

Both of these areas have spectacular biodiversity, and I knew virtually none of the species I observed in either spot. But with the help of a few field guides and iNat’s suggestions, I’ve made adequate progress in adding IDs to my Arizona observations, and I’m hoping to do the same for my Mexican observations.

Then, I’ll start looking at other people’s observations in those areas and try to ID the ones I can. Some of the species I saw were really distinctive and can’t be confused with anything else (I think; I’ll have to check). I’m hoping to “give back” a little to these beautiful areas, in other words.

Maybe I’ll just have to go back next year or the year after, to build my ID skills. Oh, what a hardship … I’m kidding!

So, maybe those of us privileged people who get to travel a bit can work hard at IDing observations in the areas we’ve traveled to.