Is there a way to add date constraints to a traditional project?

I couldn’t find one, but maybe I’m missing something. The Gall Week project @merav has set up is supposed to be bioblitz-like between certain dates, but since galls are caused by several different taxa and may remain unidentified or be undescribed, an automatic collection project won’t work for it.

Unfortunately people have begun uploading observations to it before the event is actually supposed to start.

Is there some way to require that observations be taken between certain dates before they can be added?

I don’t see any rules relating to time for traditional projects, but there should be a viable solution with collection projects – you can set the annotation restriction to be Evidence: Gall. As long as people annotate their observations as a gall, regardless of the taxon it is at, I think that should work. 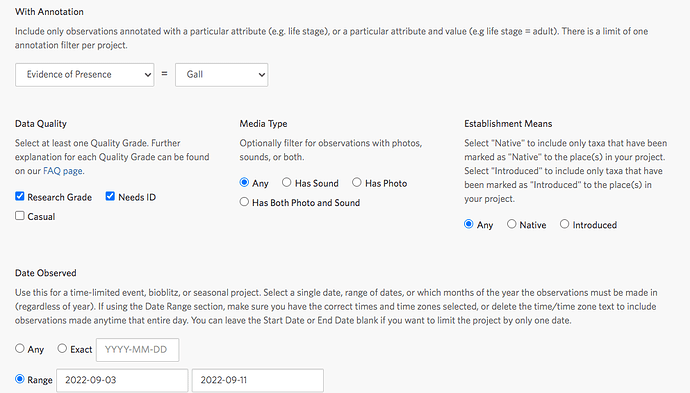 Date constraints aren’t available in traditional projects. Personally I’d go with the collection project, although there are issues with that (eg you can’t annoate observations in the iOS app).

As a stop gap you could edit the current traditional project and only allow curators to add obserations until gall week actually starts. Did you ask the people who’ve added observations why they did so? The banner and description seem to make the dates abundantly clear. I just want to rule out some sort of bug.

It’s been resolved for now, the users who added have removed the observations. @Arman 's workaround is an excellent idea as well, I hadn’t realized that was possible

I think the observers just didn’t quite understand the idea of the project.