Some folks might recall I started a thread about a nest box cam. My camera has been up and running for awhile and I finally got an occupant after the camera has been up and running for almost a year. I’m trying to decide now on some extra equipment to go with it. Right now, I only get footage or images from the camera if I pull up the feed and specifically record while I watch. Obviously, I’m going to miss stuff that way. I don’t know how long this owl has been using my nest box. Just that it’s using it now (apparently also to cache food). 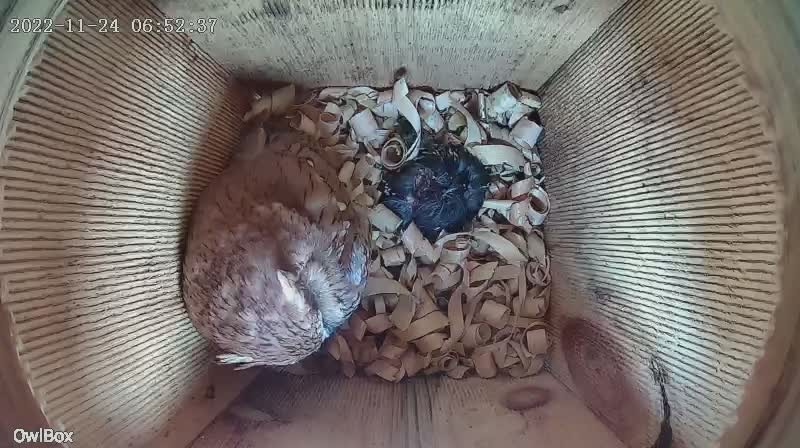 I’m trying to decide if I want to set up a dvr box to just record footage from inside or if I want to livestream. I would need a dedicated computer to livestream the footage to youtube, though. Something that doesn’t get used for anything else. I’m thinking of a small all-in-one computer to livestream (I can actually do this for less money than the dvr box option). I can’t find much detail online about this, which is odd to me. I have no idea if there’s a system performance threshold that I should be aiming for to pull this off. What I have found is a how-to regarding the software I’ll need. That’s been useful, and it looks like it won’t cost me anything subscription-wise, but what I’ve read doesn’t address hardware requirements at all.

Has anyone here set up a livestream of a nest cam, feeder cam, or similar and have any insights?

found a nice cyber monday deal on an all-in-one pc that I plan to use exclusively to livestream from the nest cam. I’ll post up the link when I have it set up

I have the live stream set up! Some aspects (all software stuff) of getting that set up were challenging. I found some guides that got me started, though.

Here’s a link to the stream if you want to peek in from time to time.

Smorgasbird is back in the box today. I had to restart the stream yesterday, so the link changed. just so the link is more permanent, here’s the link to the general account that hosts Smorgasbird’s live stream.

You need a capture card, video encoder (preferably hardware) and a hardwired internet connection (if you want it to be as stable as possible)

The amount you want to spend will dictate your hardware choices, you can put a live streaming rig with one camera together for under $500, or spend $10k with a PTZ camera, and a pro video capture/encoding rig/video switcher.

Demands for the computer if you have a decent capture card and a hardware encoder shouldn’t be insanely high, and you’ll likely need less than 100mps to stream high quality video.

maybe you didn’t bother reading the initial link, but I bought a POE camera a year ago. no capture card was necessary. just software to read the footage, and the camera I bought has a phone app that reads it that’s what I’ve been using for the past year to check in on it occasionally. now that I have an occupant, I wanted to do more with it.

I also downloaded the ONVIF Device Manager program for my existing desktop PC, though I haven’t used it for much. Since I didn’t want to occupy my existing desktop PC with live streaming the nest box, I needed a different PC. Nobody really gives details regarding the hardware requirements such a computer would need, but I bought a Lenovo ThinkCentre all-in-one PC, crossing my fingers that it would be sufficient.

Based on recommendations I read in a tutorial elsewhere online, I downloaded the OBS Studio program onto the dedicated computer. Aside from any tutorials about the specifics of doing that being more vague than are necessary, I figured it out (getting some important information about my camera from the ONVIF program to make it happen). The computer is an Intel Core-i5-6400T with 8GB of RAM and integrated graphics. It appears to use less than 10% of the CPU capacity while handling the streaming, so I’d say it’s sufficient.

My internet is 500MBps fiber, so I was not concerned about that. I spent $200 on the computer.

The OBS program can also handle recording duties, and I will probably give that a try. I have a 2TB external drive that’s not getting much use and I may check to see how useful that one is so I can assemble bits of footage for permanent uploads to the channel I set up for this live stream. especially if I get any interesting moments related to nesting behavior or anything particularly gruesome with prey.

Has anyone here set up a livestream of a nest cam, feeder cam, or similar and have any insights?

maybe you didn’t bother reading the initial link, but I bought a POE camera a year ago. no capture card was necessary. just software to read the footage, and the camera I bought has a phone app that reads it that’s what I’ve been using for the past year to check in on it occasionally. now that I have an occupant, I wanted to do more with it.

sounds like you have things figured out better than I. What would I know, I just work for a company providing audiovisual solutions that been providing professional live streaming equipment and services to dozens of clients for the last 3 years.

in my first post, I asked for insights. I didn’t get any, so I made some decisions on my own. you responded to the first post, but didn’t appear to have noticed anything that I posted afterwards.