I’ve finally decided that I’m going to put together a screech owl nest box to put in my yard. Had a screech owl show up on my security cameras a few days ago, and one woke me up the other night calling, so I want to encourage their presence.

I’d like to put a camera inside the box so I can spy on the occupants, as well as keep track of when it’s a good time to climb a ladder and clean out the box.

It baffles me that there are so many nest box cams, yet tracking down good cameras is way less straightforward. Looking at clickbaity “5 best” articles usually turns up links to products that are no longer available.

The ONE product I’ve managed to track down that appears to have the sort of form factor I want (and is actually available) is this one:
IP Bird Box Camera - Green Backyard (green-backyard.com)

I’ve tried looking up other little cameras that are for home security and whatnot, and just not tracking down what I want. Obviously, it needs a small form factor and the ability to focus on things pretty nearby, but also stuff like infrared capability, a microphone, and a mounting bracket is super handy. The ability to run as a live stream would be cool, but I won’t be doing that right now. Right now, all I want to do is for the camera to activate on motion detection and then save to the computer. Bonus points if it can record to a network-connected hard drive (I have one for the security cameras around the house).

I’m NOT interested in wireless. I have to run wire for power as it is, so I might as well go POE and get power and data through the same cable. This thing will be mounted far enough from the house that I’m concerned about wifi signal strength/reliability. I will also be building the nest box around the camera - probably using the false roof method. The less I have to fuss with it, the better, since this thing will be getting mounted ~20ft up into a tree. So, no SD card bs.

Does anyone know of any other cameras that work well for this sort of thing?

I ended up ordering this one from the same vendor.

Wider FOV (better for larger box?), and higher resolution being the reasons. Once it arrives, I’ll be able to assemble the box around it, ensuring that I increase the dimensions to suitably fit it. Considering a false lid so the occupants don’t have access to any edges of the camera, or the wire, or any of that.

I’ll be interested to hear what you think about it, after you’ve had time to tinker and test. :)

one thing I’m not clear about, and will require some testing, is if I can get the camera to store footage on a hard drive that’s connected directly to my router, without requiring my computer to be running all the time. I’m hoping that it WILL do that. getting the box built and installed in a good spot will take awhile. mostly the installed part. I want to get the placement dialed to minimize squirrel and other issues.

The camera arrived a couple days ago and I’ve been playing with it.

Camera quality seems pretty good. Image quality is very good. The IR LEDs are definitely no-glow. However, the camera makes the occasional click noise as it operates. Seems like it does that when it switches from color daylight to night mode, but I haven’t figured out all of the reasons why it might. I hope this doesn’t prove to be too disturbing to box occupants.

The software the manufacturer includes sucks. Bad translations to English make some of the options a pain to figure out. The option to add a camera over a wired connection was buried under menus on the phone app, and that made things unnecessarily difficult.

The phone app doesn’t appear to allow you to store video clips onto network accessible storage, which is a disappointment. It looks like the only option is to use your phone’s storage (built-in or memory card).

The computer program the manufacturer supplies is worse. Terrible. I found a program from a 3rd party called Security Eye which appears MUCH better. The free version has nag screens and limited functionality, but it’ll probably be fine for me for awhile.

I think in the future, once I’m getting regular occupants, I’ll probably buy a network video recorder (NVR) so I can just automatically save the clips from the camera without needing to interact with my phone or leaving the desktop computer running constantly.

So far so good. 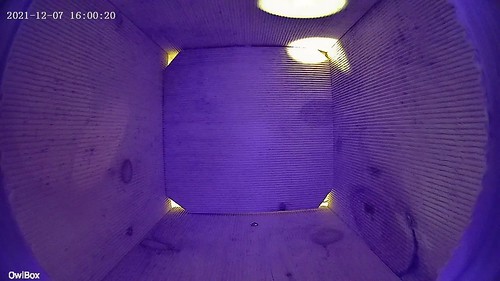 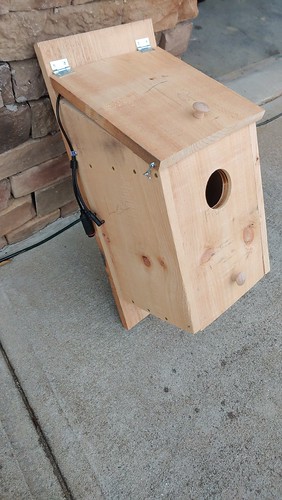 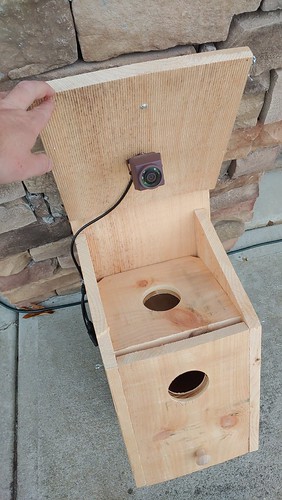 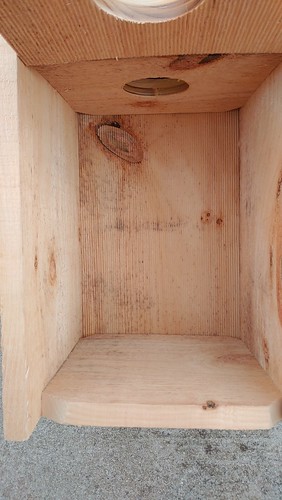 In case anyone cares, I got the camera wired up and running today. 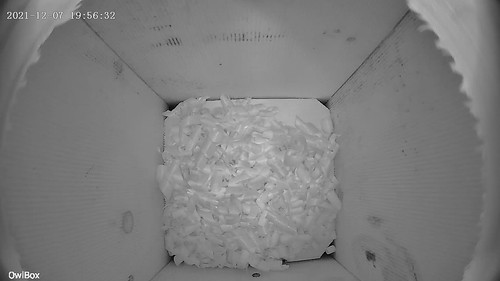 I got a 100ft length of outdoor direct-burial-rated cat6 ethernet cable and routed it to a utility box on the side of the house where the cable tv would enter (if the cable company had ever cared to serve the neighborhood), put a hole all the way through, and installed a low voltage box, ethernet outlet, and cover plate inside.

spent most of my time fiddling with cutting a length of indoor cable to the length I need to get it to my router.

I’ll be burying the cable outside and otherwise tidying up once it warms back up after the big snow that’s falling this weekend. it also appears that the camera moved at some point after my last test images, so I need to climb back up the ladder and center the image. right about now, I’m pretty happy that I hinged the roof and made it easy to get in there to service the camera.

I’ll be anxiously awaiting activity alerts on my phone when the local wildlife comes to investigate this box.