Description of need:
Opted-out observations cause frustration to identifiers, because they remain in Needs ID even if many identifiers add IDs that agree with each other, but not with the observer. In a few cases, global opt-out is used by power users who want more control over their observations, but in many cases, it appears to be selected by new users who don’t understand how iNaturalist works, and who soon turn inactive, leaving observations with high-level IDs, like “Plants” that can never be fixed.

Feature request details:
One aspect of this problem, at least for new users, could be addressed by not offering the option to new users to opt out, and instead activate it only after the user has spent some time using the site.

What this would mean is that in Account Settings > Content and Display > Community Moderation Settings the option to “Accept community identifications” would be ticked by default, and not untickable until some threshold was reached. 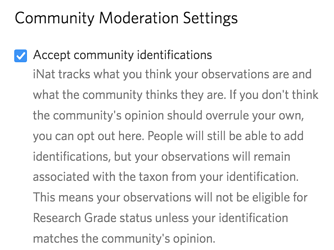 One suggestion of such a threshold is to make this feature available only after a user has made 100 identifications for others, but the precise threshold is open to discussion. Other suggestions are to simply remove this option from the account creation process, or to set the threshold at 100 observations, or six months of activity.

I do sometimes see new users opting out at the individual observation level by accident, but as per my above opinion rather than disallowing this feature for new users I would support making it a lot harder to reject community IDs at the observation level - maybe bury the option in a menu on the obs page rather than have it so easily accessible directly on the obs page?

Agreed. I think that people just shouldn’t be able to opt out of all, and should have to do it for each observation individually, after they are uploaded. That forces more thought into the action.

True, but regardless of taxonomic expertise, users do need some time to understand how iNaturalist works. In my experience the problem is less with opt-outs on individual observations, and more with users who have joined, globally opted-out (which if I remember right, is part of the account creation process), posted hundreds or thousands of observations, many with high-level IDs, and then disappeared from iNat. As things are currently set up, those observations are of very limited value for perpetuity, regardless of how interesting they are or how good the photos are.

globally opted-out (which if I remember right, is part of the account creation process)

If that’s the case, perhaps a reasonable compromise would be to simply remove that option from the account creation process. Less experienced users will probably want to start uploading observations before looking in detail at their account settings, and if they get some immediate feedback from ID notifications, that may encourage them to leave things as they are.

Most opt outs you can meet from new users are global opt outs, because iNat asks you if you want community help or not when you set up your account, they 100% have no idea what it leads to.

Yes, I’d support a decision to remove the global opt-out option (for everyone, not just new users). Opting out is useful in some select cases, but in my opinion should never be used blanket across all your observations.

I’d vote for a more targeted feature request addressing global opt-outs, but since individual opt-outs are less of an issue, I feel like there is no reason to remove that capability for new users.

There are some users who have really good observations and are interactive in comments, but don’t identify. Maybe the logic should be 100 observations or identifications?

Or better yet, activity level? I think “Duress” and “Contest” users are active for a very small window, maybe 3 months or less, whereas regular users stay on for 6 months or more? So maybe don’t allow opt out until user’s account has been active(open?) for 6 months?

On a related note there are the sad cases of accounts who had global opt-out and were dilligent about responding to curation comments but then passed away. I now have to remember “Oh, that’s from poor BJ, don’t bother to give it a more refined identification because it’ll never take”. :-/

I know the iNat staff don’t want to assume any account represents a deceased person for legal reasons, but maybe we could safely say 100 years after last login global opt-out can be deactivated? (Assuming iNat lasts that long…)

Yes, the significance of such a pivotal feature at signup isn’t well-communicated. That should be addressed. Plus the too-easy opting out at a per-observation level should also be addressed.

The problem is, if you have a global behavioural setting, the best time to ask the user about it is when they sign up. If you want to hide it from them at signup, then you have to have some sort of time-based workflow to ask them to make a decision about opting out once they are suitably experienced using the platform. That’s hugely clunky and complex from an implementation perspective, and probably not worth the effort to implement.

time-based workflow to ask them to make a decision

We have this strange situation that the iNat Forum has a nanny who whines - too many likes, too many comments, come back tomorrow. Who cares.

But on iNat itself where obs and IDs and responding to comments matter, there is no nanny. iNat is working thru making sure that every profile has a contactable email, or they will be locked out. Tick.

100 IDs for others was my suggestion. In the Forum we have to work for privileges. On iNat itself there are very few privileges to earn (setting up a project is the only one I can think of)

I would like iNatters to be encouraged (not obliged) to make IDs for others. Doing the work yourself helps to focus the mind on why opting out is an issue for the identifiers people take for granted. When you require hundreds, or even thousands! of IDs you should be encouraged to give back on social media.

Feature request for Draft Mode would resolve the problem of people who want identifiers to WAIT until they have done their own research.

A banner up top - Research Grade - Casual - Needs ID - Opted Out of CID
would make life easier for identifiers to Reviewed - Next.
And a filter in our personal settings to exclude global Opted Outs.

Weeell, most of the cases I’ve been encountering of observations by unresponsive users who have globally opted out of community ID are by users who are neither new nor inexperienced nor inactive; they are prolific observers and active IDers (!).

It’s possible this is an atypical distribution resulting from the particular set of observations I have been reviewing – i.e., in terms of the overall number of observations stuck at a high level ID due to user opt-out, I don’t know whether the majority are from new users who choose this option or from a few prolific users.

I agree that making it more difficult for new users to globally opt out of community ID without understanding the implications would be desirable, but this is only part of the equation.

Opted-out observations cause frustration to identifiers because they remain in Needs ID even if many identifiers add IDs that agree with each other, but not with the observer

Apologies in advance, as I have not followed the opt-out conversation very well.

But, would not it be more simple to just omit the opt-outs from the Needs ID category?

I’m personally in favor of some change along these lines because in my experience some new users do select the global opt-out without fully understanding what it means. I don’t think that the added flexibility of allowing new users to select this option during account creation outweighs the costs in frustration and extra time IDing futilely to the community.

I think that just not having this option displayed during account creation is probably the easiest way to implement this type of change, as opposed to having a set number of observations/identifications required to access the option. Most beginning users won’t know to even look for the option in account settings in the first place. Secondly, the activity requirement to make a project (which I support) does lead to a reasonable amount of confusion from users - there are posts here on the forum from time to time from users who create a forum account solely to figure out how that requirement works. So I don’t think the added confusion of having an activity hurdle to access the option vs. just not showing the option during account creation is worth it.

would not it be more simple to just omit the opt-outs from the Needs ID category?

I think that’s worth discussing, but it would likely be unacceptable to those observers who use this feature to maintain control over their observations while still interacting with the community.

would likely be unacceptable to those observers who use this feature to maintain control over their observations while still interacting with the community.

Hmm…. but, is that the Greater good here? Allow that small set of users to “have it both ways” or frustrate the larger body of users who actively ID ?

I think it is fair to omit opt-outs from the Needs ID pool.

There is an existing feature request with a fair amount of votes for adding a filter to allow users to include/exclude observations opted out of Community ID: https://forum.inaturalist.org/t/implement-a-new-filter-for-observations-that-opt-out-of-community-id/27053

This might be of interest and would allow identifiers to skip opted out observations if implemented.

For me, the best solution mentioned above is simply not to mention the option at the point of account creation. I also think it’s a good idea to make opt outs more obvious to identfiers in the identify portal.

Something else that might be changed is the wording above. Where it says “If you don’t think the community’s opinion should overrule your own…” it gives the impression that other IDs will take precedence over the observer’s, when in fact everyone’s, including the observer’s, gets equal weight.

Perhaps this should be changed to something like “If you don’t think the opinions of others from the community should have equal weight with your own…” or “If you think your identifications should overrule those of the community…” to reflect the identification process more accurately.