specifically Parudenus falklandicus with only 2 specimens identified on Falkland Islands. But I would rather have this to be on every insect or animal found ONLY on that island until further identifications elsewhere

Hi @anycade. I’m not sure exactly what you’re asking here. Let’s stick with the example of Parudenus falklandicus. iNat does distinguish whether an organism is introduced to a place (based on checklists). And individual observations can be labeled as captive/cultivated vs. wild. But I’m not aware of anywhere that iNat marks taxa or observations as “endemic” to a particular place.

I guess another couple of related pieces of information on iNat are atlases and ranges. Ranges are a way to say “these are the best known boundaries of where species X is expected to occur”. They can be quite precise but they’re difficult to edit. Atlases let us say “these are all the countries/states/counties where species X is expected to occur”. They’re easier to edit (for iNat curators). But neither of these really makes the statement that “species X is endemic to island Y”.

Can you explain what you’re seeing that you’d like to work differently?

But I’m not aware of anywhere that iNat marks taxa or observations as “endemic” to a particular place.

This can be edited on a place checklist. I have manually updated the status for Las Malvinas. 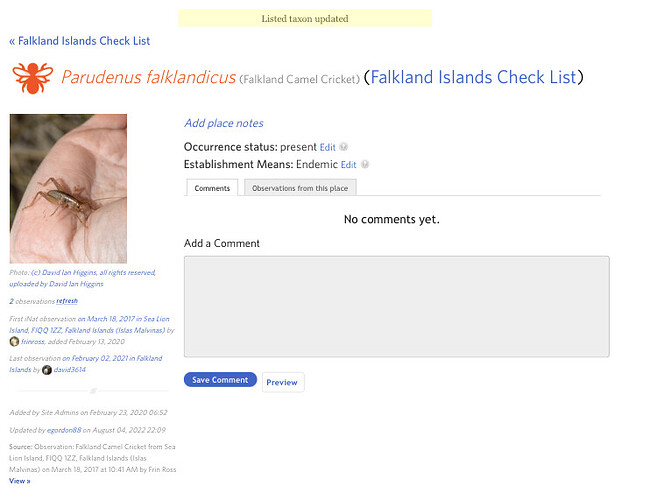 Thanks @egordon88. I guess I haven’t done much with checklists!

If the OP’s suggestion was to automatically set a species’ status to endemic if it has only been observed on a particular island, that would seem to cause a whole host of potential problems. I can think of so many ways it could fail and almost nothing that would be improved by having this automated.

But if they really want to propose that, it seems that a feature request would be the way to do it.

Agreed. Lots of species on iNat has only a few observations from a single place - not because they are endemic but because no one observe/identify these taxa outside of that particular place. Example case would be many fern species only has observations from Taiwan when in reality, they are distributed over a wide area in asia. This is due in part to the relatively high activity of iNat in Taiwan compared to other asian countries.
Automatically assigning these species as “endemic” would not really be a proper scientific action. Even the establishment status on the checklist page should ideally be sourced from a reliable reference

how do i do that again? i have alot of work ahead of me lol

this is just for islands specifically for now due to how they are surrounded by Oceans, plus this happens all the time in history if another individual has been discovered, we have plenty of people photographing insects and such. But might wanna hold off on Plants due to how they reproduce and can be widespread easily

I would suggest only changing their “establishment means” to endemic if the species is actually known to be endemic. The wording in your title was confusing because it made it sound like you were wanting all species observed on islands to be changed to endemic. If scientists know a species is endemic, mark it as such. If it is unknown whether they are endemic, then I don’t think we would want them marked as endemic just based on an assumption that they might be. I don’t see value in that.

Yes, but is the endemic nature of the species being assumed based only on iNat records or based on what scientists know from all records?

As far as my research has shown this particular species is ONLY known to be in the Falklands, even the supposed range is the entirety of the island so its safe to assume its only found there. 1910 had three specimens identified as such species and they were found in Falklands. Thanks to Orthoptera.speciesfile.org for that information. Another was found in 1984 in Falklands.
And thats all the information i can dig up due to this species being EXTREMELY poorly studied