Reject comm taxon while making obs, not after it gets identifications

Might I suggest a change whereby you can opt out of the community taxon for each specific observation at the time you upload it or equivalently when editing the observation, instead of waiting until the community identifies it before you reject it?

This is preferable to having to opt out of accepting community taxons entirely, which I don’t want to do.

There is a feature request for this but it was closed.

Yes, the response there was that staff had decided not to move forward with that request:

I’m going to close this request. There’s an option to opt out by default, or you can follow your observations and opt out when you feel it’s necessary.

Can you opt out the community id for one observation?

Yes, but only once there is a Community ID (at least two IDs). Look for the Community ID box to the right on the observation page, and click on “Reject” 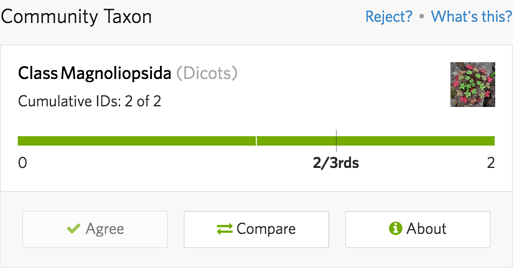 I support the original request, and it might help to deal with the problem that this option exists:

There’s an option to opt out by default

Observers opting out by default can be a very destructive option, especially if they have thousands of observations only identified to higher levels, and don’t come back to update IDs. That plant will be forever stuck at family or genus or whatever.

Another option would be to have the default opt-out apply only to taxonomic levels of genus or below. It’s hard to see a use-case for wanting to opt-out when your ID is “dicots”.

I don’t really understand the use case for opting out of community taxon by default or on upload. Why would you reject something before you know what it is?

I find it odd too, and I don’t think I’ve ever opted out of Community ID, that I can remember. Some people seem very confident in their own IDs, and I guess don’t want to run the risk of anyone disagreeing with them. But this only makes sense when they’ve uploaded their observation with a species-level ID. More commonly, perhaps people just don’t really understand what it means, and untick the checkbox here, because it seems like it will give them more control (who knows what they are thinking?): 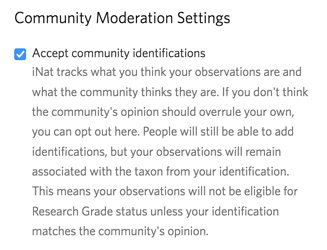 In terms of opting out on upload, there might be a fringe use case when people anticipate that identifiers might confuse their species with another, and want to assert their own ID. I feel that expanding the possibility to opt-out to include doing so before getting a Community ID, while at the same time removing the ability to do so globally, would be a step forward, and still give users complete control over their data. I’m not someone who uses this function though. I just get frustrated when someone with thousands of nice observations has opted out and then gone inactive, so that they are stuck in ID limbo forever.

One occasional problem I have is this: I would observe an insect of a certain genus. I would look over whatever scientific literature there is about that genus on the Internet and conclude that there is not much evidence that the species that is attributed to similar observations on iNaturalist in my area (Hong Kong) is in fact the correct one. In fact the taxonomy for that genus may be far from settled. The grasshoppers of Hong Kong are one example I have in mind. There is no expert on Hong Kong’s orthopterans, and therefore no one on iNaturalist with a clear scientific authority to weigh in on identifications of these. However, I anticipate that others who rely on the iNaturalist observations already available might give it a species-level identification. In such cases I would hope to pre-empt that by rejecting the community taxon at the moment when I submit the observation. But other observations I am happy to see automatically identified by others. I want the best of both worlds, so to speak.

However, I anticipate that others who rely on the iNaturalist observations already available might give it a species-level identification

I think this is a good example of a use case for being able to opt out before there is a Community ID, and at a level other than species, thank you.

That makes some good sense. Thanks.