This morning I was woken up by a pandemonium in the garden and reminded again that that is, in fact, the perfect word for a group of wild parrots.

Whenever I drive by Laguna Rosada nearby, I admire the flamingos and whoever dubbed a group of them “flamboyance”; it is really fitting.

But within my garden there are many little creatures that do not have collective terms, or if they do I am unaware of them or just disagree. Thus I have coined my own.

The slugs that also appear en masse in my garden after rain are collectively referred to as a cornucopia. This feels… wrong. (I am working on an alternate.)

Does anyone else have any collective terms they especially appreciate, think are rubbish, or have made up for themselves?

A while ago I shared the following in several places (another discourse forum also, BTW) 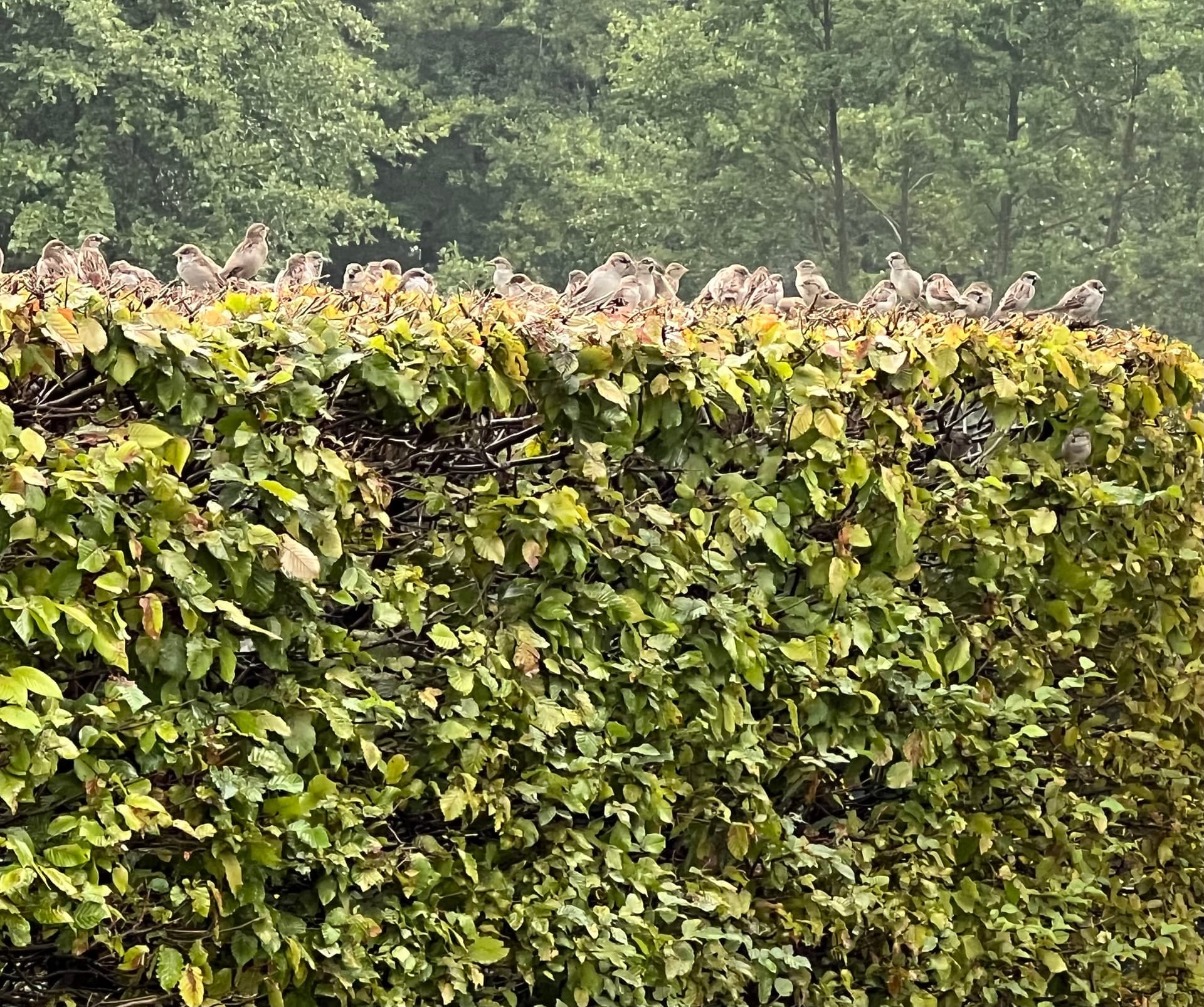 A host of sparrows on a hedge Jasper

and I walk by every day

<edit>
Can you tell that I had to stand on my toes and raise my hands with the electro thingie high over my head?
</edit>

Later I learned that another collective noun for a group of sparrows is … a charm of sparrows, “charming indeed!”, I thought.

Oh, they are very charming! (I would also accept a “sweetness” of sparrows.)

A cackle of translators, because those people never stop talking!

But asking as a non-native speaker, are these collective words really used? Like for real? I imagine most languages have like a couple of collective nouns, like herd or flock or school, but it’s so utterly weird to think that English speaking people actually would say ‘a murder of crows’ and the like without blinking. And a frigging pandemonium? Why in the world would you say such a thing?

Because it is the perfect word if you have ever heard a group of parrots. They are raucous. You are welcome to stick to herd or flock. Those are functional words and you will be understood.

However colorful, expressive language is not limited to English. For example in the part of Mexico where I live, someone who constantly complains is likely to be referred to as chachalaca, which is a local bird that is extremely noisy and considered disagreeable.

Yes, I get it, but it’s like it’s for fun mostly? Or do English speaking people actually use these words neutrally? My impression is like, ‘yeah haha we call it a pandemonium, but for real, it’s really just a flock’.

It’s a good question. I’m sure some of them are very much just made up and never commonly used - others such as the ones you mentioned and pride of lions, gaggle of geese very much are used. Then there are those inbetween which may not be in common use but are well enough known that you might occasionally hear them used by someone who fancied speaking in a colourful way - murder of crows, parliament of owls might fit in that category. Others probably appeared once in a book as a vivid description before someone decided to pretend it was ‘a thing’ so they could make a tea towel design out of it. There is, I would suggest, a continuum from one extreme to the other depending on how well known they are.

What I mean is that Swedish has several different words for groups of animals, but none of them really means anything else than ‘a group of animals’. It’s so weird to me that someone would pick a word like say ‘gluttony’ or ‘pandemonium’ and just decide that ‘Hey! Guess what! This word means one thing, but now it’s also a group of these animals! But NOT any other animals, by all means!’

Thank you, this is a good answer – a little bit of both then

There’s a wonderful reference called the OED, the Oxford English Dictionary, that definitively and exhaustively traces the origin of (English) words, how their usage changes over time. It would be interesting to know how and when “pandemonium” came into use in relation to parrots. Like I said, it really is perfect.

Authors like Shakespeare and Chaucer, and more recently García Márquez and Mahfouz as well as others, had influence on words and how they are used – that is indisputable. So too the internet and pop culture. So too tea towels.

and a fresh one - a chandelier of hummingbirds!

While it is not real (but should be), I really love the joke that a group of baboons is called “a Congress” (even if its mean to the baboons)
As for real things, “A smack of jellyfish” has to be one of my favourite name for a collection of the animals.

I’m confused I think by fiskskola then @jensu. Is it not “fish school” as in “school of fish”?

(I saw it once on a multi-pack of candy.)

While it is not real (but should be), I really love the joke that a group of baboons is called “a Congress”

I have come to the conclusion that one useless man is called a disgrace, that two are called a law firm, and that three or more become a Congress!

No, fiskskola is not a word I’ve ever heard – the Swedish word for ‘school of fish’ would be fiskstim, where stim is ‘a group of (swimming) animals’. Fiskskola would mean either a school for fish or a school where you learn about fish.

That makes sense. As I said it was on candy packaging (you can guess which).

Odd how different languages are. Swedish uses a few words for all types of groupings, English recycles words in new ways, and I have always liked how German seems to come up with new words for concepts seemingly overnight. I would imagine they have extraordinarily specialized words for groups of animals but as I do not speak German I have no way of knowing.

Collective nouns for animals in English are sometimes known as “terms of venery” because of their supposed association with hunting. https://www.proofreadingservices.com/pages/nouns-of-venery

It is a funny thing, in English, that some collective nouns are so comfortable that we use them without thinking (pride of lions, pod of whales, pack of wolves, gaggle of geese, etc.), but others are rarely heard and would probably elicit a few strange looks in conversation (e.g., parliament of ravens, a bask of crocodiles, a glaring of cats…).

One that used to be somewhat obscure but that’s now pretty common, thanks to amazing online videos, is a murmuration of starlings.

Creative and clever terms! For the slugs en masse - how about a “slugfest” ?

As for a “pandemonium” of parrots --it’s great, and alliterative with the “Ps” - but I’d rather call them a “cacophany”