This Ars Technica article was just published today about spiders that occasionally eat snakes, based on this research paper available on BioOne.

In this paper, 319 incidents of snake predation by spiders are reported based on a comprehensive global literature and social media survey. Snake-catching spiders have been documented from all continents except Antarctica. Snake predation by spiders has been most frequently documented in USA (51% of all incidents) and Australia (29%). The captured snakes are predominantly small-sized with an average body length of 25.9 ± 1.3 cm (median = 27 cm; range: 5.8–100 cm). Altogether >90 snake species from seven families have been documented to be captured by >40 spider species from 11 families. About 60% of the reported incidents were attributable to theridiids (≈0.6–1.1 cm body length), a spider family that uses strong tangle webs for prey capture.

Those incidents are listed in the appendix of that paper, and I was happy to see it included at least one iNat observation. It also references another iNat observation demonstrating the opposite (snakes eating spiders).

I just thought this was so cool. Has anyone else here witnessed this happening, with or without photo evidence?

I’ve seen that. When I was younger, we lived in the Appalachian region of the U.S. and every year we’d find a handful of hatchling and juvenile ringneck snakes (Diadophis punctatus) caught in low, ground-touching spider webs. Usually in the walk-in basement, coal room, or up in the storage warehouse - places with concrete floors. I suspect that the tiny snakes couldn’t get enough traction on the smooth floor to pull away from the web after slithering into it.

When found, some were alive and could be freed. Others were already dead or decaying. Sometimes spiders were present in the webs, and a few times appeared to be feeding on the captured snake. Some snakes were still touching the ground when we encountered them, and live ones would attempt to slither but couldn’t make progress. Others had their bodies elevated an inch or two off the ground. I don’t know if the spiders spent time progressively pulling them up with silk lines, or if the thrashing of the snakes ended up tightening silk and lifting them. Either way, interesting stuff.

Semi-regular occurrence in Australia. You get a snake-eating spider story/shaky video of someone’s barn in the news once every few months when there’s a slow news day

No, but what I have seen in the Dominican Republic is a giant wolf spider eating a small gecko. 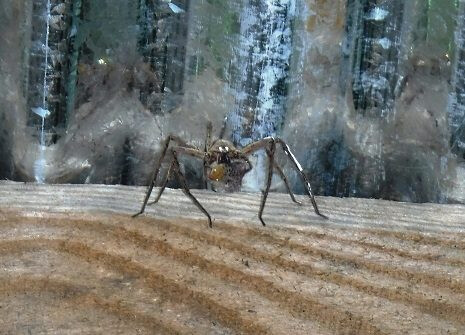 I just came across this observation on iNat:
https://www.inaturalist.org/observations/15193514

Welcome to the forum