I’ve been pointing out to my six-year-old California’s state flower, state bird, state mineral, etc. In typical six-year-old fashion, he has demanded that California must also have a State Poop.

Wishing to encourage his interest in nature, I therefore searched for observations in California that contain the word “scat.” https://www.inaturalist.org/observations?place_id=14&q=scat&subview=map&view=species

Coyote is the most common species in the search results, but fewer than half of all coyote scat observations occur in California. The second species on the list, Gray Fox, is also widespread but the great majority of gray fox scat observations are within California (and not only because @beartracker lives here). This scat is quite common in many California habitats and generally prominently placed (e.g., in the middle of a trail or on top of a log or rock).

I do therefore and hereby nominate Gray Fox droppings as the California State Scat.

What scat would you nominate to honor your State, Nation, etc.? It should be:

Maybe worth searching for observations in project: Scatology? I always recommend it to people who observe scat and the project’s art/graphics would definitely amuse a six-year-old.

Any California coprolites known? searching . . . How about a 5 million year old sealion poop? Or dinosaur? Or even human from a site at Lake Cahuilla, maybe 10,000 years old?

NM is one of the leaders in having state “stuff” and I think this is an important gap in our resume. I vote for coyote scat, because it’s an important source of seeds for prickly pear and juniper plants to spread and grow.

While Coyote had the most observations for Minnesota, the highest number of Research Grade scat obs were North American River Otter lontra canadensis. It is native to Minnesota. Its scat appears to have scales and shells, which might be interesting to a 6 year old (hidden treasures, like owl pellets). 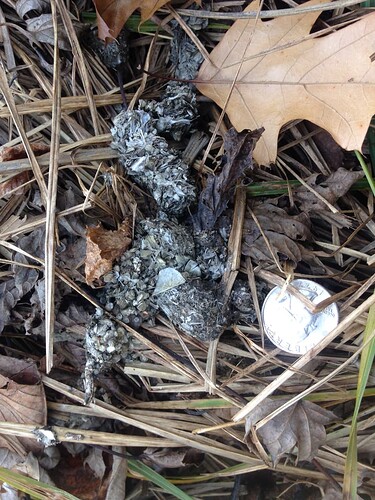 In the Dominican Republic, the scat I tend to find left out in the open in random places is… human.

Not native, or per se wild. And not exactly what I want to encourage my six year old to take interest in. But I hear you.

I can think of one place which already has an unofficial excrement:
One of the iconic species of the mudflats of the North Sea area is the lugworm (Arenicola marina), which most people are likely to encounter only in the form of its casts. At least for the German parts of this region (I haven’t undertaken a comparative study of North Sea tourism culture), the tourism industry has embraced this somewhat unlikely mascot and it is possible to buy a wide range of memorabilia featuring stylized depictions of worm poo.

(This could possibly be a fun annotation project for the scatologically inclined: I suspect that a large proportion of the observations on iNaturalist are of the castings rather than the worm itself, and yet only a small number of them have been annotated as “scat”.)

A search for the annotation “scat” produces over 40,000 observations of nearly 2,500 species, which should be enough to keep a 6 year old happy for a while.

I think this is a good candidate for the prize of “most aesthetic poo”: https://www.inaturalist.org/observations/131336147

It occurs to me that the fecal shields produced by some insect larva might also be of interest.