For those of you who photograph and collect species, how do you keep track of which photos belong to which specimen while in the field? In the past, I’ve taken note of the photo numbers for a specimen. For example, if I photograph a lichen, then collect it for identification later, I will write in my data sheet (or on the bag with the collection) that this is associated with photos 1345-1353. This doesn’t seem particularly efficient (especially if collecting lots in a day), so I’ve wondered if there’s a better way of keeping track. I’ve thought of writing the collection on paper and photographing that with the species (before it’s collected), but that messes with the lighting and requires rewriting numbers over and over, and not waterproof. I was thinking some sort of little device that you can easily change the numbers on (like on a lock box) might be useful…

Maybe not the best, but it is quick and works. If I have preprinted labels (like for genetic samples in a tube of ethanol), I just take a pic of the label in the tube and then the specimen as above. It’s pretty quick and with memory cards so big, I never run out of space.

Perhaps an old fashioned mechanical lap counter? Photograph the counter at 0001 then photograph the specimen as many times as wanted then advance the counter to 0002 and repeat for a new specimen. For fewer specimens fingers or a hand work great.

Rather than keeping track of photo numbers (which is hard with some digital cameras), I will sometimes just write down the time for each observation/specimen in my notebook (or in your case on the specimen bag). These times are then easy to match with the photo timestamps. (If you are concerned about time mismatch between your watch and camera, just take a picture of your watch before each specimen.)

times are then easy to match with the photo timestamps

If the time on your camera is set up correctly… (I tend to forget about this when moving between time zones or when the switch between standard and daylight savings time rolls around. As a result, I have a lot of photos with the wrong time stamps.)

I don’t collect often and when I do it’s usually just one or two samples for microscopy needed for IDs, so I rarely have a need to track numbers. However, even without collecting it’s easy to lose track of what goes together - e.g. does this leaf picture go with the bark picture before or after it? I have taken the approach of photographing some sort of “separator” (e.g. my hand, the sky, or whatever) to indicate a break between a series of pictures for one individual and another.

I consider all of you lucky who just need to hold a label next to a plant or lichen in the field - as here’s someone writing who aims to get in situ photos of un-identifiable Dipterans (Sarcophaga, Pollenia…) before collecting them.

Not only is there a considerable amount of no-catches after a good photo session (especially when not being armed with a net, and many of specimens were actually caught by hand), there is also some waiting time involved for anesthetizing/deactivating the flies before transferring into a smaller tube. On top of that, after IDing the work of a field day, most of the specimens then usually turn out to belong to the same species.

On the other hand, some of my observations might actually depict the first known photograph of that species alive (i.e. with a confirmed ID) - although not necessarily being a rare species.

So, here’s my process:

At home: mount the specimen and label accordingly with the associated vial number / flower species, ID the fly, go through your camera roll and upload the species to iNat. 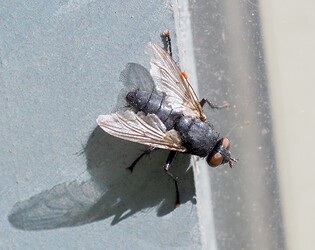 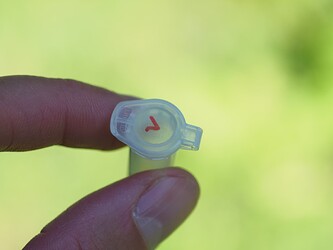 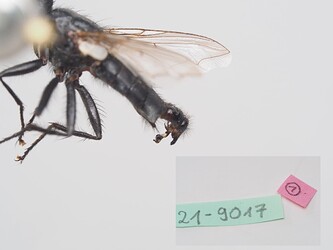