Screenshots of what you are seeing:

The default “apostrophe” character on iOS is actually a right single quotation mark, ’. To enter a proper apostrophe, ', you need to long press on the soft key; I imagine most people don’t know or do this. The taxon search for names with apostrophes in them, e.g. Say’s phoebe, does not work with the default single quote character. Both seem to work fine on web.

shows up for the first four characters

does not show up if full name typed without any apostrophe / 'okina (expected behavior: Dodonaea should show up)

name does not show up if typed with apostrophe / 'okina (expected behavior: Dodonaea should show up)

Here’s the name as it is in iNat. I know I can just change the name to be consistent with the character used for 'okina but this seems to be a bug regardless. 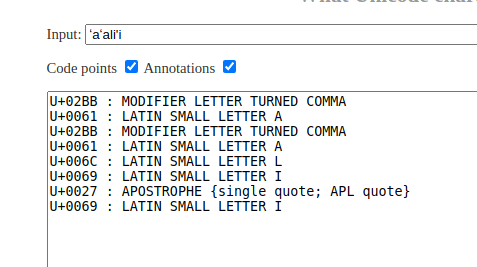 Here’s a previous issue regarding the ʻokina in searches: https://forum.inaturalist.org/t/cant-search-certain-characters-x-in-hybrids-apostrophe-in-hawaiian-names/9161