Over time and across several different taxa, I’ve noticed an issue with how taxon swaps are implemented that results in a couple of issues:

These issues seem to arise when curators swap a lower-level taxon from one higher-level taxon into another, without also splitting the higher level taxon. This post is not about whether any particular swap/split is justified vis-à-vis various external authorities or iNat conventions, but rather about what happens when this type of change (swap without related splits) is implemented. It’s an overarching issue from what I’ve seen, so I’m not addressing it with individual taxon flags. (And I certainly do not intend any criticism of any curators, identifiers, or observers involved in the examples highlighted below.)

Here’s a very recent example: Some orbweavers were just swapped from Eriophora into Hortophora, a genus which was added to the iNat taxonomy yesterday. In situations where one or more users had added an ID of Eriophora and one or more users (but fewer than a >2/3rds majority) had added an ID of a species like E. (now H.) transmarina, the observations have gotten bumped up to the subfamily level because the IDs are now in conflict, even when that was explicitly not the original intent of the identifiers, as in this example: https://www.inaturalist.org/observations/68147691.

I am not a curator so am not fully familiar with all the taxonomy tools, but in the abstract, it seems to me that in this example, a more desirable outcome would have been to have any generic IDs either switch to the appropriate new genus if the split could have been geographically atlased or revert to subfamily level (without conflicting with lower-level IDs) if not. Had either of those two things happened, in the example linked above, the Observation Taxon and the Community Taxon/ID would presumably have remained at the species level (though still awaiting another confirming specific ID to reach Research Grade).

Instead, the Observation Taxon and the Community ID both reverted to subfamily level. So, if the user who made the genus-level ID does not change their ID, it will of course take two more users coming along to add a genus-level or species-level ID to get this observation back down to either a genus or species level.

That’s a lot of extra work, especially as these situations proliferate across taxa and through time, and will probably result in many observations being stranded at higher levels for years/indefinitely, especially for taxa that just don’t have four or five or six people who can make good IDs. As far as I can tell, the single example cited above affects at least a few hundred orbweaver observations.

Again, this is not a post about that specific example, so here are three other examples I’ve come across recently:

I recognize that there might be some downsides to splits of higher-level taxa that have perhaps thousands or tens of thousands of observations (perhaps computational power foremost among them), so perhaps the curator community has largely decided that examples like the ones I’m citing here are necessary sacrifices in an effort to keep the bulk of the system running as smoothly as possible. Or, perhaps the real issue is the oft-discussed need to recruit and retain more identifiers so that issues like those above are easily washed over by waves of fresh IDs (though this doesn’t seem to be in the cards in the immediate future, unless we’re talking about Danaus plexippus).

But, by highlighting all this I guess I’m hoping that there are could be best practices/trainings/discussion topics for curators and the broader community to help reduce these kinds of issues in at least some cases?

Yes ideally these would be split, especially because they have lots of observations. But that can make IDs look pretty messy and the need to atlas always complicates things. If users were active in updating IDs it wouldn’t really be a problem, but often it gets too complicated and most people don’t notice.

If I’m understanding this (I only read half)

If taxonomic groups needed to be split but weren’t

Species A, B, and C are swapped out of Genus X and into newly created Genus Y. However, Genus X is not split. All the old IDs of Genus X then become problems in the ways illustrated above.

Are you stating (and is it even possible) that every time any of these changes occur the change should be made by starting with splitting the genus?

That’s what it sounds like to me. It is possible, and more convenient now that output taxa can be the same as input taxa—the only thing being split off are the new IDs.

But yes I’ve never actually done this because it’s just not worth it for minor changes with few to no observations. If there was a larger swap (maybe more than several dozen observations) I would probably split it. But then people get annoyed that their IDs are changed…

Is it being stated that the species which move from genus X to genus Y are still registered as if they’re in both genera, or still in X, when people use genus IDs?

Species are only ever in one genus. But if they are moved to a new genus with a swap, the IDs now all disagree with any previous genus-level IDs. So if species A was moved from genus X to genus Y, all IDs of species “YA” now disagree with IDs of genus X. If genus X was split into genus X and genus Y, in the absence of atlases all genus IDs would be automatically changed to subfamily Z and there would be no disagreements. If genera X and Y are atlased, and have no overlap, the genus ID would either stay as X or be replaced with Y and there would be no disagreements with the new species IDs.

is anything actually incorrect taxonomically?

No, it is just how it is handled on iNat.

is anything reflecting the fact that species A was once in genus X?

Yes. All IDs will be withdrawn and show that they were swapped: 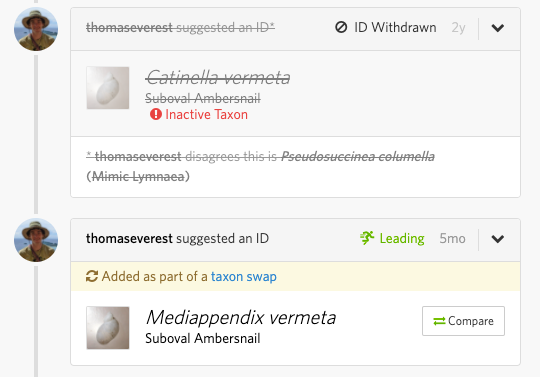 (This was an example where I didn’t split the genus because just swapping the species wouldn’t cause any disagreements.)

But yes I’ve never actually done this because it’s just not worth it for minor changes with few to no observations.

Yeah, I’ve certainly seen cases where it wasn’t needed because there so few (or no) observations. Some of these, though, affect hundreds to thousands of observations, like the Fallopia/Reynoutria example.

I guess I just need to put flags on individual taxa or swaps if I notice problems. Just seems a shame to pile up taxonomic conflicts in the system over time, but I guess it’s all just too complex and variable to avoid those kinds of issues completely.

why subfamily instead of tribe? - where applicable

It was an example. The ID is reverted to whatever the next higher level is.

In this case they would have to reID the genus. But that would be a disagreement, and they already should’ve disagreed with the species before even if the genus was the same. If they’re not sure, then they would want to reID with the subfamily (or tribe or…), which would be done automatically for them with the split.

For that reason I prefer the genus IDs stay, but that the users receive notifications.