What were your top three observations from 2022? These were mine:

https://www.inaturalist.org/observations/106402880
A common grass in my neighborhood that I was never able to identify myself.

https://www.inaturalist.org/observations/111572789
Apparently the first observation of Rorippa dubia in the US. It is probably common in Louisiana, but very inconspicuous.

https://www.inaturalist.org/observations/133768882
This pretty wild orchid between graffiti-covered warehouses was totally unexpected and heart-warming to observe.

Fun thread and reason to reflect back on this years observations

Most fun detective work:
When I observed this one I was sure it would be easy to get to a genus at least, maybe even species, due to the remarkable form of the “head”… however, it turned out to be very difficult to find something. I studied a number of papers on south american pholcids over several days (some really hard to get to) and it was the most amazing feeling when I finally found it! Turned out to be a first for iNat and I later fround a second record in the older observations of this site.

Most fun mimikry in action:
This one also had me excited on the spot. Unfortunately in the forest was a rather darkish and I had shaky hands after a long hike and the pictures did not turn out as good as I would have loved them to be. But when this “giant ant” dangled in front of my face from a silk thread I immediately realized I was witnessing an amazing ant mimikry in action… would have probably just walked by it, if it had not just dangled from the thread… also turned out to be a iNat first and so far only

Most fun IDer-activity-stimulated:
I got this year a bit more into identifying Membracidae… beautyful little creatures! This lead me also to specifically look out for them when out with my camera myself and each time I was very happy when I found a new species. I am happy that I found over 10 different species this year (if they would all be identified, probably some more). That picture is a representation of that new interest

The long-awaited one:
https://www.inaturalist.org/observations/127480701
Moth I saw once before at the same place more than 10 years before, and it happened to be common, but at nights only.

Would be easier if we had 10 to choose, there’re too many categories.

Rarest species is hard to choose. This is one of several ‘first and only’ insects from this year Triepeolus denverensis from Taos County, NM, USA on August 30, 2022 so it’s a decent nominee.

Most surprising Hapalomellinus albitomentosus from Alburquerque, NM, US on September 09, 2022 was a small, jumpy wasp at a work project site. Such a random place to find her and thank goodness for smart phones.

Most satisfying to identify Aerophilus nigripes from Alburquerque, NM, US on October 02, 2022 because it took half a day to find the necessary papers online and characters on the specimen and solved the mystery of a common, autumn critter on rabbitbrush bushes.

This looks like a fun topic! Everybody has such cool observations.

My personal favorite was this western banded gecko that I found in Gilbert, AZ. I count this as my lifer lizard and lifer herp in general.

One of my rarest species was this Hemiphileurus illatus, which I found in the same spot as the banded gecko. Somehow, I found two more of them under that pot two days later.

My most photogenic animal was this pale-banded dart that I found in Woonsocket, RI. I found it clumsily flying around, and after working with it for a bit, it calmed and I could get close enough to get nice photos, and even hold it.

Most unexpected: Western Pond Turtle (Actinemys marmorata) from American Canyon Creek, American Canyon, CA . I had read so much about invasive turtles on the West Coast, and that the native one was rather a habitat specialist, I didn’t dare identify it to species myself.

Most effort in pursuit: Yellow V Moth (Oinophila v-flava). I believe it is the same individual moth as this one, taken two months earlier, after seeing it in my room for two more months before that. Since the first picture was too blurry for anyone to corroborate, I wasn’t satisfied, and kept watching for another chance.

Not my observation, but it deserves a special distinction (if not “top observation”, then “top identification”):
https://www.inaturalist.org/observations/19462130

2 years ago I commented it as “Caesalpinieae with red flowers (comment for future search)” because this character seems to be unique in the tribe. The specimen in herbarium still shows a red flower color.

Denisophytum buchii
Last documented observation of this species in Haiti was 1927 according to GBIF.

Most surprising: Burmannia biflora
I had no idea the species (or genus or family) even exists when I almost stepped on it but immediately thought, whatever it is, I love it. It’s probably the cutest flower I’ve ever seen and I think my personal favorite of the year.

Most surprising: Ophrys × hybrida
This year is the first time I’ve seen any Ophrys and I think the entire genus is incredible - but I was really confused by this one at first. (I probably shouldn’t be surprised that orchids do hybridize.)

Most surprising: Brothera leana
I would never have known what it is - but I thought it doesn’t look like any other mosses, instead like some sea urchins in an underwater scene. Thankfully someone identified it and said local botanists call it “sea urchin moss”

It has only 7 (identified, that is) inaturalist observations so at least by that measure it was also my rarest of the year.

Favorite Overall: I love taking photos of mixed-species flocks of shorebirds, and this year I got some great ones! 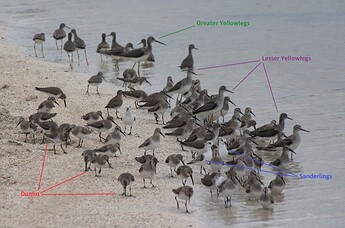 Most unexpected: I had no idea what Papilio cresphontes caterpillars looked like until I stumbled across this one! 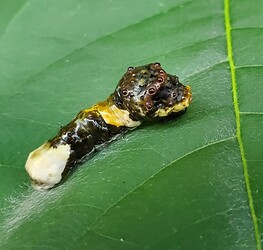 Interesting Discovery: Thanks to the forum, I now know why I never see any male, dark morph Papilio glaucus! Can male Eastern Tiger Swallowtails be dark morphs? 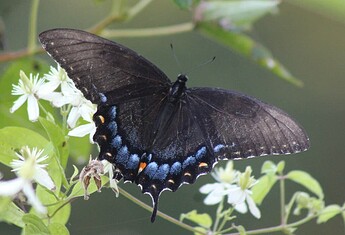 God, this is far too difficult for me. This year was such an amazing year for me!

One of my more recent observations I’d say is the most confusing and intriguing sightings I’ve had:
https://www.inaturalist.org/observations/142745496
These were just sitting at the side of the road and I thought they were jellyfish at first… but what would jellyfish be doing half a mile inland? I then thought maybe cow snot or something but some people are saying it has something to do with frogs. Very strange.

I’d say my most surprising observation was one of a millipede:
https://www.inaturalist.org/observations/130605486
I have heard my mother say that in the town then she had seen millipedes but I never expected to find them way out in the countryside, let alone the shockingly small size of it, only being say 15mm long. I always thought millipedes were giant and tropical but as per usual, I am very naive.

And finally, something I have been looking for for a very long time - The round leaved sundew!
https://www.inaturalist.org/observations/135679142
These are a carnivorous plant which I had heard grows here in Shetland but I had never seen for myself. I have been looking around for it for ages but at long last I was able to find it growing on an old peat bank. I was happy to see that it looked very healthy, proving that the area I was in had not been touched for a very long time as nature had reclaimed it. Along with that I found lichens, spiders and various insects which I had not observed before.

I always think that I’ve seen everything until I keep finding species that I have never heard of here in Shetland. This list was very difficult to make due to how many new and surprising or long sought after species I had found this year. I still have lots to find yet, next year I hope to find many different species of moths as that is something I didn’t really get the chance to do this year.

Hey all! I’m still new and slow to post observations (due to not having a car!) but I’m so thrilled to be a part of the iNat community!!

I think this observation of mine is the only one that classifies as “surprising” or particularly exciting based on the ID’s and comments from fellow users on it!

No idea if this qualifies but I sure got excited to hear that it was rare!

Favorite Overall: I love taking photos of mixed-species flocks of shorebirds, and this year I got some great ones!

Haha, that reminds of some worktrips with a collegue and friend in Africa. She always said “Taking pictures of Jaguars, Lions and elefants is nice, but the real deal are COMBOS!” :-D

Fun lifer was this tiger salamander we had to brake for: https://www.inaturalist.org/observations/133853942

Among the rarities was this Yellow-crowned Night Heron where it is imperiled: https://www.inaturalist.org/observations/132899494

One of my more recent observations I’d say is the most confusing and intriguing sightings I’ve had:
https://www.inaturalist.org/observations/142745496
These were just sitting at the side of the road and I thought they were jellyfish at first… but what would jellyfish be doing half a mile inland? I then thought maybe cow snot or something but some people are saying it has something to do with frogs. Very strange

I’m pretty sure this is frogspawn. Frogs typically lay their eggs in gelatinous clusters. It’s odd that this wasn’t found in a shallow pond, however. Maybe it used to be a body of water that dried out?

Edit: It turns out, these are likely the remains of gravid female frogs from predators that couldn’t digest the jelly-like eggs. Thanks for solving it @deboas!

It’s my first year on iNat and I still need a lot of learning to spot and shoot interesting stuff (especially plants, my 2023 new year resolution is clearly botany).

The one that started it all: Faxonius limosus at the Etang du Vignoble (Valenciennes, France). One of the first places I went when I got a DSLR was a pond near where I used to live as a child. Signed up to iNat to get an ID for it, so you can pretty much blame it for my grebe and cormorant spam.

The one that really made me love iNatting: Parasitellus on a bumblebee (Chabaud-Latour, Condé-sur-l’Escaut, France). I don’t think I would ever have stopped to look at a bumblebee on the ground before, the difference in how I view nature (and how much time I spend engaging with it) is astounding.

The “character arc”: Tachybaptus rufficollis, Saint-Amand-les-Eaux, France. Around late October, I started to notice small water birds that would dive as soon as they saw me. I started spotting them everywhere, they became my “white whale” for a good while, I struggled to get a decent picture. Then, about two weeks ago, I struck gold. Little grebes will not be stealing the top spot in my heart from their great crested cousins, but it’s pretty close!

Most Interesting: Honey bees swarming, where they cluster around a new queen.

Most Enjoyable: A large leaf bug because I prefer to observe and identify plants, so getting tricked by it was fun!

Most Surprising: This species of nettle sting was much more abrupt and lasted much longer than what I’ve experienced with the regular species I encounter.

1-A fresh Great Purple Hairstreak found on a road, at 3:30 am while walking my dog (his idea to be up that early, not mine).
2-Blandings Turtle in Ohio.
3-A lovely Atlantic Camas in Ohio.

Most surprising
https://www.inaturalist.org/observations/117151457
Fiesta flower in apparently a known location, but not observed on inat in Lake County.

I think this would be my least observed, if the moth species is correct.
https://www.inaturalist.org/observations/113336233

This comma that visited me on my Snow Mountain hike might be favorite shots taken this year.
https://www.inaturalist.org/observations/128412761

Thank you and @deboas for answers to what that was! I thought it was quite peculiar that people would say its something to do with frogs but that explains it.