This isn’t Ligia oceanica! This is Parribacus antarcticus, the sculptured mitten lobster.

Another Google search and this isn’t Armadillidium nasatum, but a Porcellio sp. (Edit: This might actually be Oniscus, not Porcellio).

I’ve tried to replicate your results without success. It is important to remember that Google remembers your previous searches and other activity to shape the results of your current search to give you the results the algorithm thinks you will find most interesting. Therefore your results and mine will differ. This is one of the reasons I use DuckDuckGo to do most of my searches. DDG doesn’t weight search results based on past activity.

Depending on what source the misidentified internet photo is linked to, you may be able to have the misidentification corrected. If it’s on Wikipedia (and I’ve seen many misidentified photos there), you can suggest an edit yourself. Other sites sometimes have a link that allows you to report errors and, if it’s an active site with a responsible owner, the error might be corrected.

This is a good reminder that Google and Wikipedia are often garbage and shouldn’t be considered authoritative sources. Useful as a starting point but not a replacement for proper investigation.

I’ve found that it depends on the device being used. When I search up Porcellio laevis on my phone, the correct species showed up. However, when I search it on my computer, Armadillidium vulgate shows up. 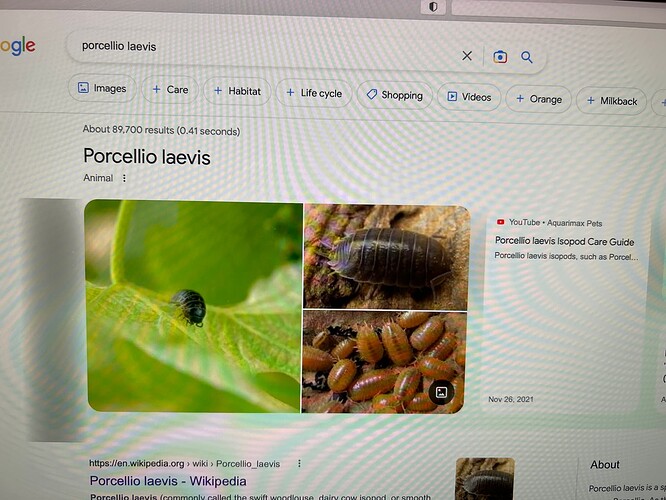 The images don’t seem to come from Wikipedia, they all come from one website. When I click the photo, it takes me to that website, which is just a picture of that photo.

It replicates for me–well, for the bottom two but not the top one. Those “incorrect” images are on a Google server–gstatic–so they’re not being drawn directly from a webpage/site. Dunno what Google is doing with them or why they’re serving them up. I think gstatic plays some sort of image caching role.

Thanks for the explanation! I find these images odd, I haven’t noticed this until last night. Whenever I searched these previously (e.g. last week or last month), the correct animal would show up.

I downloaded the Porcellio scaber image and did a Google Image search. It’s on several stock photo webpages…but that doesn’t explain why it’s the first image Google chooses to display. Probably has something to do with its algorithm–results of which will vary as usage of the internet varies.
https://lens.google.com/search?p=AXAp4whPSYf7bSVIiExWqaPU39KqK7J8OLn1n-2wuIX0u850gDa7meuc53wRaoJPgBpiZ5ocEiCwjxt62kL6FGebnblrNzAM2E2LhKi3KsWu72oBza-xR4Nqiioe9ofxEseK_HjnVKzQEpnUAdgAd--x6-2TchjUBbKtii-NE03gdWs1tuMNjk3wwHocSfEOKIcb1Q9oDHmpGL_H-EptwQYzmDyt2EDTvdtfCy7AKflT0YyjCDsAtpHF6A%3D%3D&ep=gisbubb&hl=en&re=df#lns=W251bGwsbnVsbCxudWxsLG51bGwsbnVsbCxudWxsLG51bGwsIkVrY0tKR1ZqTkRZd016azRMVEE1WlRJdE5ETXhZeTFpTURGbUxUVXdaVEl3WkRWaFpHWXlPUklmWnpKaFdWUjNXRFJOTVdObGMwRmhRM1F0VldoaFp6WjFjVlE0TFZkQ1p3PT0iLG51bGwsbnVsbCxbW251bGwsbnVsbCwiMS0wIl0sWyI1MjViMzMxZi1mODZjLTRjMjUtODMwMi01MDI3Y2M0NmY3NzAiXV1d

I wonder how Google decides what is in an image. I often use Google Lens to search my blog photos. I have dutifully named my image files, and added alt text - but Google still prefers to say … that’s a pumpkin!

I wouldn’t lump Google and Wikipedia together - Google result often are garbage. Wikipedia works very similar to inaturalist, with 100ds of volunteers/experts putting a lot of work into identifying those pictures in their free time. And inaturalist very likely has a lot more misidentified pictures than Wikipedia…

Yes, Google just summarises the factual inaccuracy of websites (although one might say its editorial policy actively contributes to it too.)

In terms of the differences or similarities between Wikipedia and iNat, it seems to suggest that regardless of the amount of effort or brainpower on tap, both websites can still often contain garbage as well as good stuff.

Neither are 100 per cent reliable, therefore handle with care.

I have discovered a similar error on google images (and my most beloved of websites Wikipedia!) thanks to the tireless work of @tomgibo – the mislabeling of common raccoons with short fur as crab-eating raccoons, especially (for whatever reason) in Costa Rica’s coastal regions. This problem has actually improved significantly, especially on Wikipedia where I and others like me have been trying to correct improperly labeled images, but it’s notable that this exists for a medium-sized mammal which we have collected far more data on and encountered more frequently than the fascinating arthropods seen here.