Your best "monkey or ape?" tricks?

Beginner naturalist here who is super interested in taxonomy!

I think most people know that you can tell an ape from a monkey by the lack of a tail. This is very broad advice of course and there are plenty of exceptions, but it’s still very useful for someone who wants to identify a primate because it helps them narrow down their options.

There are a million super cool resources out there for telling the difference between two or more very specific living things (like this one for American vs Fowler’s toads), but I’m wondering about more general tricks.

So I was wondering, what is your favorite (or favorites) equivalent “monkey or ape” identifiers for the taxa that you’re interested in?

I keep a folder of “quick ID” inforgraphics on my computer. I recently switched computers and I haven’t yet moved all my files over, but here are two regarding skink ID in eastern North America. Note: these were not made by me, and I actually forget the source. 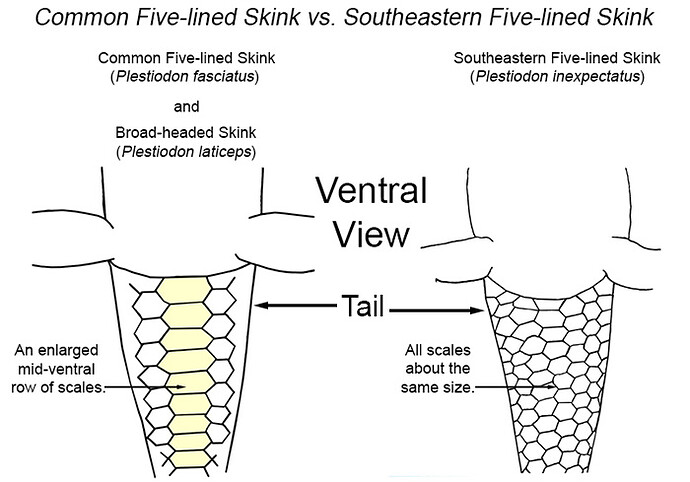 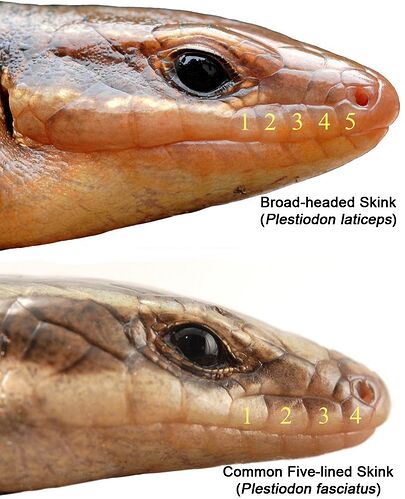 It´s a fun question and I am looking forward to what will be posted here!
But it´s hard to answer, asyou can find these kind of “monkey or ape” questions basically at any junction between two taxa. And what is interesting for you of course depends a lot on where you are at at the moment.

For example: You are interested in whether you found a spider or not?
First count the legs 1-2-3-4-5-6-7-8 … if it is less, it is probably not a spider (or one of the unfortunate ones that lost some). If it is 8, count the body parts. If it is only one >> not a spider, but maybe a opiliones or mite. If it has 2 bodyparts, the chance that you indeed found a spider just rose significantly.
But careful with the tricksters! This one could have even fooled me https://www.inaturalist.org/observations/134201680

look at the first pair of legs! If it is significantly longer then the other legs, it is a Cheiracanthiidae

Within mollusks that have calcareous shells, bivalves have two hinged valves, gastropods have one valve that is usually spirally twisted, but can also be simple, shaped like a limpet. Chitons have eight shelly plates that articulate with one another. Tusk shells have one hollow tusk-shaped shell with openings at both ends.

I can’t see this topic without inflicting this brainworm on you. https://www.youtube.com/watch?v=--szrOHtR6U

Not as difficult as some of these, but I’ve got downy/hairy woodpeckers pretty well. My rules of thumb are generally the downy’s bill is shorter compared to the head and especially that it has black spots on the tail feathers; between the two I can generally get them pretty well.

you can find these kind of “monkey or ape” questions basically at any junction between two taxa.

As I understood the question, it was less about technical characters like the number of lip scales, and more about easy rules of thumb. Like separating pine subgenera. Five-needles – subgenus Strobus (white pines); any other number of needles – subgenus Pinus. And yes, there are exceptions, like the pinyon pines, but the point is a general rule of thumb.

These simple (though not 100% absolute) rules of thumb are what I understood the OP to be asking for.

But it’s such a broad question, I personlly have no idea which taxon to choose, even which class, and how much they’d be helpful for a person who won’t id local taxa?

The question was intended more for what taxa particularly interest you, regardless of necessarily how useful they’d be. :)

The most “general” thing I could make is if you id Solidago in Europe and don’t know species well, native ones with one major stalk will be in subsect. Solidago (unless it’s Solidago azorica only on the Azores), all introduced ones that are bigger and more branched are from subsect. Triplinerviae.
But honestly if you’re maybe interested in one particular group, that’d be easier to think of cool facts.

I have heard it said that “rushes are round, and sedges have edges”, referring of course to the stem cross-section.

Yes, I got that. But as in the example with the spiders (8 legs; 2 bodyparts = very broad) and the similar families (general habitus + long first pair of leg is Cheiracanthiidae, otherwise Clubionidae) it depends a lot on where you stand, which of those rules of thumb would be interesting for you at all…

If you for example do not have a lot of insight into coniferae, the trick about pines might be too far already.
For a herp-enthusiast the trick with the scales might be just fine…

We agree with @owlshead-wren with the Downy v. Hairy Woodpecker differentiations.

Also, in our region, two Thrushes of similar behavior are often present:
Swainson’s has yellowish eyering and neck, while Hermit has a rusty red tail that contrasts with its body color. https://www.allaboutbirds.org/guide/Swainsons_Thrush/species-compare/67459811

In determining Black Bear v Grizzly Bear, color is often not helpful, as during this hike in Yellowstone! https://www.youtube.com/watch?v=9u2RHqMciWA We determined it was a Black Bear because it lacked a shoulder hump and its ears were so long.

Had a too close for comfort grizzly encounter also in Yellowstone a few years ago (or maybe Glacier, my memory is iffy), but that hump certainly stands out when the bear is within a couple hundred feet of you!

I can’t see this topic without inflicting this brainworm on you.

Butterflyfishes (family Chaetodontidae) and dwarf angelfishes (genus Centropyge) can look pretty similar to people unfamiliar with fish, but there’s a good trick to differentiate them. Look at the gill covers, if they have a large spine on the gill cover, protruding over the edge of the cover, it’s an angelfish (this is a defining feature of Pomacanthidae in general). If no spine, it’s a butterflyfish.

One a lot of people get confused with is the difference between sawfishes (family Pristidae) and sawsharks (family Pristiophoridae). There are many many ways to distinguish these two groups, but perhaps the easiest is to, again, look at the gills. If the gills are above the pectoral fins, and visible when the animal is laying on the seabed, it’s a sawshark. If the gills are on the animal’s underside, it’s a sawfish. This rule is also useful for distinguishing other sharks and rays (sawfish are rays!), shark gills are above the pectoral fins, and below the pectoral fins in rays. Pretty useful, as some sharks can look very raylike (angel sharks especially), and some rays are called sharks in their common name (like the Shovelnose Shark and Shark Ray, which are both really rays).