Are there any examples of non-human animals that engage in body modification?

Are there any examples of non-human animals that engage in body modification? Just curious. I couldn’t find any examples via web search.

It may depend on what you mean by “body modification.” Would something like when a lacewing sticks a piece of lichen to its back count? If you mean something more specific like body decoration for the sake or decoration (not camouflage) then I’m not aware of any. But my knowledge base is low so maybe somebody else has an example!

i guess body modification is a spectrum, but i was thinking beyond hermit crabs changing shells and birds sharpening their bills. my underlying question, i guess, was whether body modification was a uniquely human thing?

Yeah, that’s an interesting question. You’d have to find somebody more knowledgeable than me to answer it, but I’m curious to see what people say!

Ants and termites clip their wings, drongos making their tail feathers look different, etc., but you need to change your question, there’re tons of ways animals engage in that, but how many of them do it with no point or for the sole point to stand out?

Some dogs and cats over groom, losing (much) fur and, sometimes, creating wounds.

But, were you rather thinking of an analog to body modification as a cultural behavior, as it is in humans?

They are so cool! 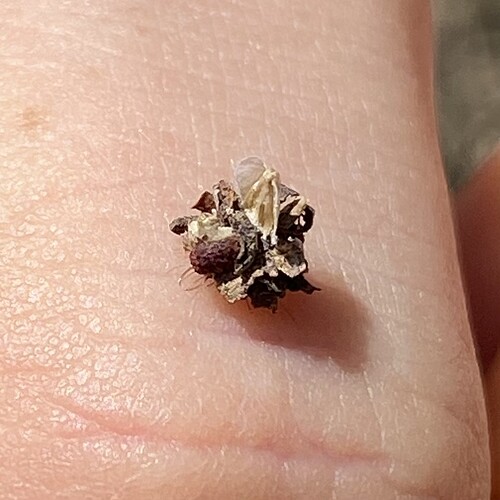 I´m not sure detritus-covering really counts as “body modification” in my book…
it´s more like a costume
but if it did, then also we have ladybird Scymninae larvae and Damaeiidae mites in that category

That’s fair. Like most things it depends on the definition. This may turn into a definition debate, but I guess the only thing that matters here in this discussion is what OP means when they say “body modification.”

Squirrels chewing up snake skin and then spreading on them to mask their own scent:
https://www.ucdavis.edu/news/squirrels-use-snake-scent

Brood patches in ducks and geese are plucked by the birds themselves; apparently in other birds the feathers are shed.

Body modification is normally thought of as actions that change the body itself, usually permanently, such as piercings, scarifications, and in more extreme forms, the head flattening traditionally practiced in some Native American cultures. It is normally done for ornament or to identify with a particular group.

I can’t think of any non-human animals that do things like this, at least not for these reasons.

Some dogs and cats over groom, losing (much) fur and, sometimes, creating wounds.

That’s more of a neurosis, like feather picking in cockatoos or trichotillomania in humans.

If this is done for display purposes, it might qualify, but I can’t find any information. Natural selection would tend to select against such behavior as piercing or scarifying, since these carry a risk of infection. Skull flattening would not be possible, since the necessary head binding of the young would interfere too much with their ability to move around; it is only possible in humans because our infants are so helpless that they wouldn’t be moving around on their own anyway.

Many species of motmots (Aves: Momotidae) in the Neotropics prune a portion of their tail feathers to create a gap on the shaft:
https://www.inaturalist.org/observations/2510428
They swing their tails slowly side to side at times. I think the current threory is that this has evolved as part of courtship display. As long as the feathers count as part of the “body”, this certainly seem to be a case of body modification.

I wrote it at night and I meant momots of course, not sure how drongos get their tail feathers that way. It is both display and functional against predators (to tell them they’ve been noticed).

You are discussing the ‘spoons’ at the end of the tail, like this?

Yes, the feather grows normal, just long, and they take out part of it to make the romb.

Caterpillars go pretty hardcore on the body modifications by wrapping themselves up and growing wings, antennae, long legs and beautiful colours.

Don’t think humans are that extreme yet… Also preeetty sure this isn’t what you meant :p

I’m not sure what you mean though really, I assume you refer to things like nose rings, neck rings, tattoos, horns(inserts), etc?

Would an animal caught in a trap chewing off its own leg to escape count for this? I think some captive animals engage in self-harming behaviors, too, as a response to the stress of being held captive in too small of an enclosure, for example.

Adult males of Tidarren and Echinotheridion always amputate one of their pedipalps (this is believed to be for the sake of making walking easier).

Also, if you count the hollow part of the shell as “body”, then the snail Rumina decollata engages in bodymodding too.