What type of device are you using and from which locality? It can happen when e.g. your phone is in English or you’re in a country that speaks 2 languages, though on app it often shows English names if there’re no local common names (which is not your case, as both species you listed have correct French names assigned).

The two species have french names… see comment below.

Did you mean it just as a quick links for others or something else? Because e.g. for blackbird I see a French name just as OP named it (Acer negundo has a different, but still a name).

Quick reference. But https://www.inaturalist.org/taxa/12716-Turdus-merula does not give a French name for me…

I wonder if those names have assigned places to them, and thus are not shown if you’re not there, but only curators can see that.

Just checked; the french name for Turdus merula isn’t assigned to a place.

Can you please post a screenshot of what you’re seeing? Here are instructions for how to take a screenshot on several types of devices: https://www.take-a-screenshot.org

Thanks all for your input.
I am located in France and I am using a laptop.
Here is a double screenshot, showing that the common names of 2 species are not in French while the rest of the screen is. So far, I have only noticed it for 2 species.
https://ibb.co/K0q5Bc1
Regards

The species’ country of origin should be in French in a French sentence, not in English

The common name of this plant appears in English in the French language page
https://www.inaturalist.org/taxa/59029-Verbascum-thapsus (select ‘français’ in the footer)

Similar bug in Chinese pages. There is no Chinese common name, therefore the title name should be the latin name, not the English name.

I suspect this is because you’ve chosen the United States as your common names place (go to Account Settings → Content and Display). Does it look liek this? 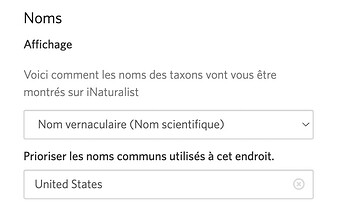 @tiwane
You are right.
‘Prioritize common names used in this place.’ was incorrectly set to United States
I removed it and every went as expected.
Thanks all.

The only bug I see is that the locale=fr effect does not seem stick to subsequent pages. It would be a great feature since the language could be specified in a reference URL, in an article, for instance.

the locale=fr effect does not seem stick to subsequent pages. It would be a great feature since the language could be specified in a reference URL

personally, i don’t think the effect of the locale and preferred_place_id parameters should be “sticky” across pages. the fact that the website already defaults to the user’s account settings, or to the web browser’s default language, seems sufficient, and the parameters should override only on the specific pages to which they are applied.

just for reference, this is another thread by the same original poster which probably should be merged with this one: https://forum.inaturalist.org/t/inaturalist-french-version-feature-request-language-specification-in-the-url/32770.