I created a web game using the iNaturalist API to practice identification of any taxa, and thought it would be cool to share here.

It displays a scientific name and location, then four images to choose from.

The functionality isn’t perfect, but there is a simple guide explaining usage.

Here is an example with the taxon Buthidae 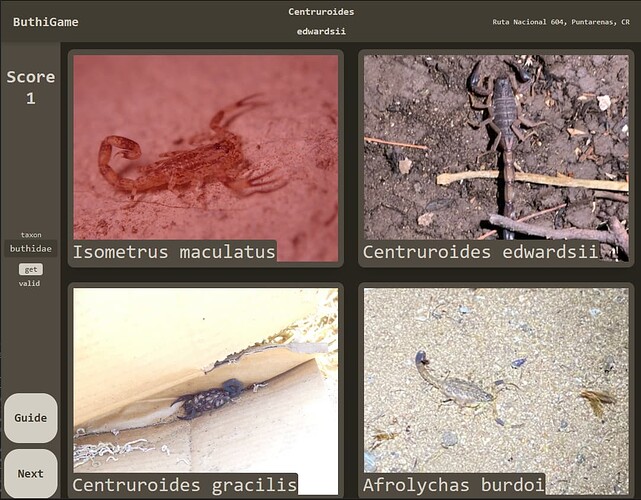 There’s a weird thing, it suggested to find a blue tit in Czechia, but the photo was of Pleske’s tit, and even before clicking I went and checked iNat there’s no hybrid observation from that country and from that locality there’s no genus observations at all. 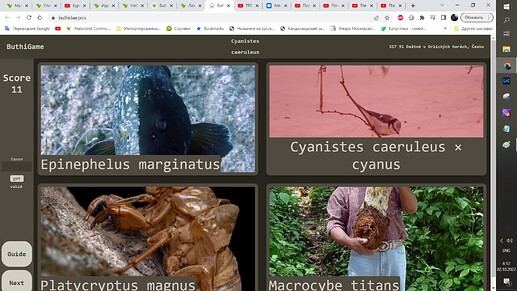 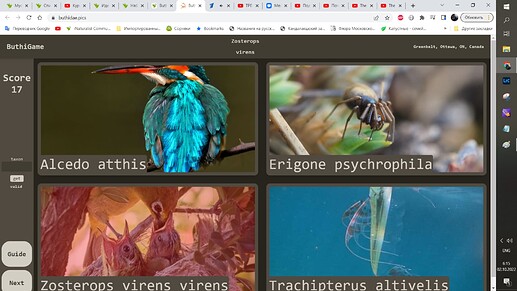 Really interesting!
Just a suggestion, i think adding a location filter would be great as many of us focuses on a specific geographical area

there are several glaring bugs (particularly related to pre-loading of observations and transitioning between taxa), and the way it gets data seems a bit inefficient (issuing at least one request per photo using sort of a pseudorandom? function, rather than just getting everything in one request).

also, the taxon lookup is very basic and inexact (try looking up “cat” or “dog”), and it’s not super obvious that the game won’t work unless you specify a taxon that contains multiple species. your guide says to pick “any taxa [sic]” but then also adds “(class, family, genus)” – so this seems a bit contradictory since species are taxa, too. when you’re making the request for a taxon, you’re not actually filtering by specific ranks.

conceptually, i think the idea is fine, except that it doesn’t allow for geographic specificity. it’s better than a design where you’re shown a single photo and asked to pick from a list of taxon names (which is probably less useful than just actually identifying in the system).

i had thought of a version of an identification game shows multiple photos like this and asks you to pick all the photos that match a particular taxon (with other “filler” photos selected from sibling taxa or “similar species”). it would have functioned much like one of those CAPTCHA things that asks you to select all the photos that contain a traffic light or something like that. much like a CAPTCHA, i thought that it would make sense for the exercise to result in real work. so i thought about providing a mix of research grade and needs ID observations, where the needs ID observations would end up with actual confirming IDs if you selected them.

but then i thought that the grid design of such a CAPTCHA thing wouldn’t be ideal, since the photos would be so small. so then i thought it would be better if the photos were laid out as a line of photos so that they could be bigger and allowing for you to go through the line to swipe left/right on each or click a button for each to agree or disagree. but then i thought this kind of design would actually be less of a game and more of an alternative identification app…

in other words, every time i try to think of a way to make a game around identifying taxa, i always end up thinking that the most ideal/useful thing is to just actually identify in the system. the only game idea that hasn’t led me back to just identifying is something like this: https://forum.inaturalist.org/t/if-anyone-is-interested-in-making-a-game/34440.

a blue tit in Czechia, but the photo was of Pleske’s tit

i think this was the underlying observation: https://www.inaturalist.org/observations/69521948.

I just want to say, that I’m really enjoying it! Even though you can not be specific, or that there are some bumps and issues. Still a lot of fun to learn new things especially when you are predominately a fungi and plant cat haha.

My only real gripe is that sub-species seem to be wrong and I’m not sure what is up. I’d love for it to be sorted to Kingdom, Phylum, order, etc. or geographic regions as well, but this is an amazing start so far!

I visited the website and it showed a picture from my own observation (of a weevil, Lixus fasciculatus)! What were the chances for this, haha?
There are some glitches but overall it’s pretty fun. I would prefer if you were able to view the full version of images because sometimes they’re cropped awkwardly and you can only see the animal’s legs (for example) and it’s hard to tell what it is. Also, it would be nice if people who originally uploaded the images/observations to iNat were credited. Another thing I want to mention is that your game seems to use non-RG observations: my Lixus fasciculatus observation is a “needs ID” one, yet it was still included. This might lead to incorrectly identified images being displayed.
edit: the game asked me to find tribe Mecysmoderini among 4 photos, I chose the correct one but it turned red as if it was wrong - similar to the problem Marina had
edit 2: wow i have 50 points already
edit 3: 100 points :)

I will say I came across some of the same bugs as the other people. But I will also say that it is an entertaining. I set the taxa to plants and I won’t recognize 3/4ths of the species I see, but by using broader knowledge about the family/genus I can still get a lot, which is kind of cool! Usually when identifying I stick to taxa around my local area that I’m familiar with, so a bit of a outside the box experience for me.

regarding the functionality and bugs, this is my first ever web development creation so its also a bit of a learning tool for me haha (things should change/improve over time as i learn more).

This is great! I’ve been looking for something like this to pass the idle time, and your site is very streamlined. I echo the need for a location filter though! I hope you keep the site up and are able to smooth out some of the bugs.

really glad to hear other people find enjoyment in this too!! over the next few days the bugs should be fixed, and i plan on adding filters to display things like date, user, etc.

Played around a bit, seems good to me!
Looking forward to whatever you will add to this

i love this! is there a way to see an observation that is in the game? i found one that is incorrectly IDed and i want to go fix it - EDIT: sorry, i have replied to the wrong post

is there a way to see an observation that is in the game? i found one that is incorrectly IDed and i want to go fix it

i will be adding that feature in today or tomorrow!

you may want to take a look at https://forum.inaturalist.org/t/how-well-do-you-know-your-local-wildlife-now-you-can-test-yourself/10711. the gameplay of this is very similar to yours. so if you’re going to make something very similar, you might as well make yours better than what’s already available.

Ive seen it before, and that game is specific to location and not aesthetically pleasing in my opinion. Like i said before, my version was designed more based on personal preferences and being able to practice identifying any taxa, so i have something to do in my free time. Fully respect and acknowledge that though

That´s a great concept. Love that I can pick a taxon to practise! It actually also gives me ideas for what to ID next :-)
But unfortunately the pictures are often cropped in a way that I don´t really see the animal…

Thanks for the mention @pisum. I was recently reminded of this (had no idea people were still interested) so I got it working again: https://www.taxachallenge.com.

@willphill3 great work! If I had time I would have loved to make something that focuses on personal preferences. I’m glad you’re doing it.