Hi everyone, over the past few years I’ve been periodically working on a flashcard web application, which you access here: 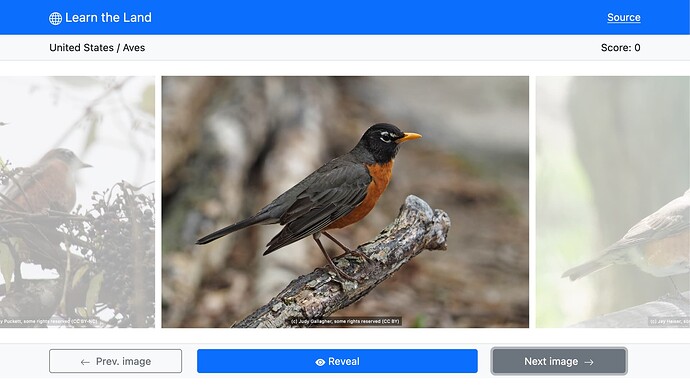 If you give it your location, you can decide where you want to study, what taxon, and then it’ll automatically incrementally load more flashcard. There’s a scoring system, and basic spaced repetition algorithm so you’ll see flashcards you don’t know more often than the ones you do.

It’s all open source, browser based, and written in TypeScript. The source can be found here: https://github.com/frewsxcv/learnthe.land

Would love to hear what you all think and if you have any feedback!

I got three taxa I knew twice with little between 1 and 2 showing, maybe it’s possible to make that they appeared less or didn’t appear at all unless you check everything in that list, so it can go the next round?
Also, would be nice if there were options for common names as it can see where you are geographically, I see those English names for the first time, need to go back to iNat and check if they’re what they seem to be (don’t know Latin for everything).

boo. this doesn’t work unless you let it access your location.

Ideally there would also be an option to search for a place with a textfield or map, but I haven’t prioritized that, nor had the time. If someone else wants to add that I’d definitely accept that feature!

I haven’t prioritized that

but how am i supposed to judge it? the parts that i can see look promising, but now i’ll never know…

i think it’s interesting that so many people have thought of developing or actually have developed different quiz / flashcard games and other functionality utilizing the iNat API / platform.

just for your reference, my favorite concept for quiz / flashcard functionality is this: https://forum.inaturalist.org/t/easy-instructions-to-turn-inaturalist-in-to-a-quiz-mode-version/29780, although it’s mostly concept.

would be nice if there were options for common names

Multiple choice questions with commonly confused species found nearby would be cool. It’d also be better if you could enter your own location.

After trying it for birds in my county I like it!

There is a lot of repeats though. It would be nice if the photos were randomized more to make them a bit more of a challenge. I’m pretty good with the birds so I didn’t really have any don’t knows.

Thanks for the mention @psium. I had let the project collect dust for a while and it stopped working but I got it working again recently: https://www.taxachallenge.com/

I first played on taxa I am familiar with and then moved to something where I have less knowledge.

Thoughts when playing my county and plants (where I have a solid foundation and known gaps):
I think it would need a way of remembering me (iNat user name or login) to be most useful. It isn’t including easily confused taxa together as you begin. So it needs more time to learn what I don’t know. OR maybe speed up the introduction of new species. If I say I know something 2-3 times, I don’t want to see it for a long time (like maybe not at all on the same day). If I say I don’t know something, maybe show it again in a few turns, but don’t keep showing it. The reason I am saying I don’t know it is because I can’t distinguish it to the species level. Until the game is including the similar species, I am not going to start learning the visual differences.

Thoughts when playing my county and birds (where my knowledge is limited to charismatic/notable species)
I played for several minutes and knew more than 75% of the birds on the first pass. The repetition of things I knew was less obviously annoying, but still present. I also noticed that reuse of the same photos influenced my ability to “recognize” certain species, i.e., I was recognizing the specific photo, not the bird. Maybe that’s not a problem because there is some rotation in the photos. I still think that for me to enjoy this game, the algorithm would need to preserve information about my history in order for it not to be redundant upon return. Or I would need to be able to select a level that isn’t beginner.

Thoughts when playing insects in my county (something I know almost no species).
The level of repetition was appropriate and I feel like if I kept playing, it would help me learn. I knew hardly anything to the species level on the first pass, and started to recognize some. Even if its not teaching me to distinguish between commonly confused species, I would be more confident in recognizing groups.

Overall I like the idea. I found play intuitive. Bugs were minimal (crashed once). I would recommend it to someone as a way to start becoming familiar with the most notable organisms for the taxa/area they select.