This came up after the top identifier in my area for the taxon group only had 2 genus guesses for the observation, and I was reaching outside my area for someone who might know a wide diversity of taxa within the larger group, rather than just knowing the more common species in that group in his / her area, that he / she always identified.

I’m not sure if this shouldn’t go in “Feature Requests” instead.

Could there be a way to show leaders in the diversity of species, genera, or families

Interesting and I would vote for this

preferably with some kind of accuracy measure

How do we define the correct answer?

There’s no way to find it out without checking them, but nothing prevents you from tagging them and finding out, then learning who ids what.

“How do we define the correct answer?”

I imagine ID’s that were subsequently voted down would average less accurate. I expect an ID’s that makes it to “Research Grade” is a less reliable measure of accuracy, then subsequent voting down is an estimate of inaccuracy. If we look at the “Similar Species” section within a species page, it lists species commonly “misidentifed” as the species the page is for. I imagine that is determined by being a species identification on an observation other than the one that made it to “Research Grade”, and became a “Maverick”.

You can use link like this https://www.inaturalist.org/observations?ident_user_id=marina_gorbunova&not_user_id=marina_gorbunova,melodi_96&place_id=any&subview=map, where you need to replace my usernames with the name of ider, and can see how much they id of particular species.
Well, that’s why we learn iders, you tag them and see what they know, they wouldn’t suffer from checking your single observation, and if they don’t answer, tag the next one. But there’s no way to build a system like you ask, because there’re too many parametres that often are not shown in actual data, you can not know something is there until you ask for it. And they can be anywhere on the leaderboard, but more often than not they already ided something for you, that’s how you learn, or they’re mentioned, they have bio description as you say, they can be a world specialist with 15 ids and system of % of correct ids wouldn’t show a difference between such person an new user who also may add first, finer ids, but they can be both correct or wrong and often there’s nobody to check and correct it.

I choose identifiers to tag
first - by helpful comments - it is this species because … need photos of …
I also check what they choose to observe themselves
And what they choose to ID
then you decide who to ask to ID that spider??
You will soon build your own go to list.

Those are good ways to choose an identifier to tag, but I think it would still be helpful to have a number of species, within say a genus, that they have identified, to go with the number of ID’s they would have made in that genus.

Could this help?
Unfortunately the display is not synthetic.

Update:
This link (user ID + taxon ID) shows in details all the identifications made by a user within the scope of a taxon.

In this example, you can check what IDs I made for the genus Agarista. Did I identify at the genus rank or at the species rank? How many different species do I identify in this genus? Am I just supporting identifications already done by others (“supporting”) or do I propose new or more precise identifications (“leading”, “improving”)?

I’m not sure what you are showing me in that link.

I added these edits to my initial post, that those who read it earlier wouldn’t have seen:

"I imagine next to the number of their identifications in a genus, family, or higher, it would list the number of species, or genera within that group they had identified.

This came up after the top identifier in my area for the taxon group only had 2 genus guesses for the observation, and I was reaching outside my area for someone who might know a wide diversity of taxa within the larger group, rather than just knowing the more common species in that group in his / her area, that he / she always identified."

this format sorts things in a nice way to see, for example, how many species per genus at a quick glance
https://www.inaturalist.org/observations/taxa?ident_user_id=stewartwechsler&taxon_id=136329&place_id=97394

conifers IDed by you in North America

(the /taxa page requires you specify either a place, observer, project, or timeframe)
(caveat that the taxa displayed on the list are the community taxa and not the taxon associated with the IDs)

I’m not sure if this shouldn’t go in “Feature Requests” instead.

If you have a specific actionable request, yes, please submit to #feature-requests using the template provided there.

Compare for instance the results for 2 different subfamilies in the same family, for the same identifier:

bouteloua, that indeed looks interesting! Would you be able to explain how anyone would create that link for any identifier, any taxon, and any place?

The only one not always easy to find is the ID of the place. Below is how I do to find it.

Consider any observation at the location of interest.
For instance, for Austria, consider this observation: 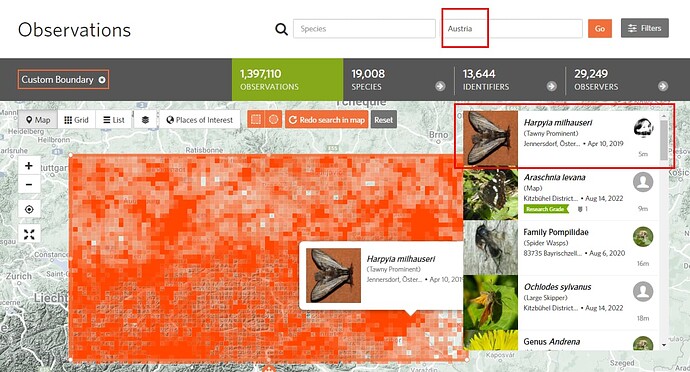 The observation page is:
https://www.inaturalist.org/observations/144561528

Now, copy paste the observation ID in this other URL:
https://api.inaturalist.org/v1/observations/144561528

And search for “place_ids” in the result displayed: 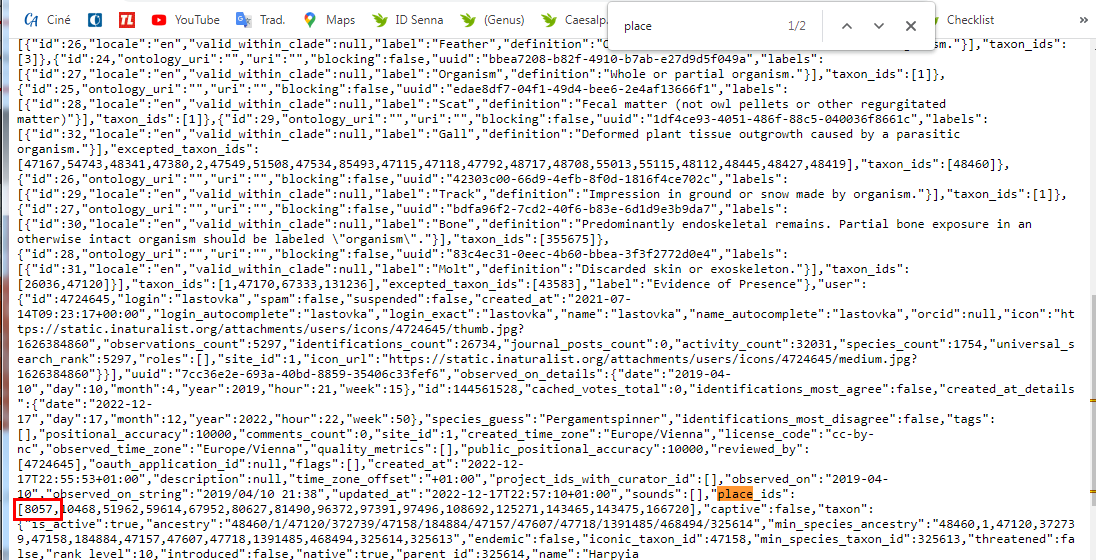 The first number that comes next, 8057, is the ID of one of the regions where the observation is located.
This number actually gives you the place “Austria”, copy/paste it in this URL:
https://www.inaturalist.org/observations?place_id=8057&subview=map 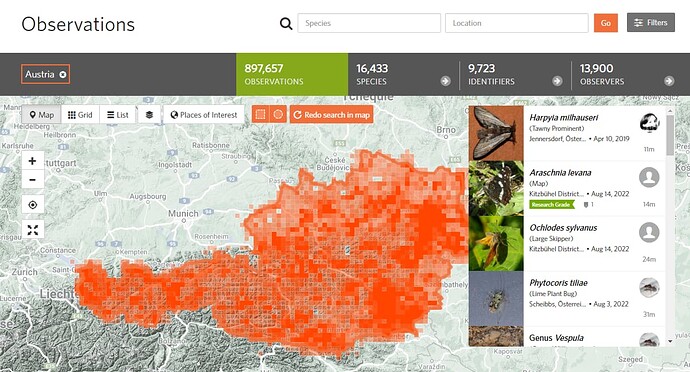 Thank you jeanphilippeb ! I may have to try that a few times to get it down. That said, I may still like to see a quick and easy way for anyone to see the diversity of taxa someone on the leaderboard has made ID’s of within a larger taxon.

The solutions proposed by @bouteloua and @Marina_Gorbunova above are both useful and complementary, but one thing to watch out for is that the results show the current ID of the observations not what the particular user ID’d them as. So using the conifers example above it turns out that I have ID’d two conifers, both swamp cypresses. (https://www.inaturalist.org/observations/taxa?ident_user_id=matthewvosper&taxon_id=136329&place_id=97394). These two observations still show up if I exchange the taxon number of ‘conifers’ to ‘swamp cypresses’ specifically (https://www.inaturalist.org/observations/taxa?ident_user_id=matthewvosper&taxon_id=49666&place_id=97394). Now I wouldn’t know a swamp cypress if it smacked me in the face - I pulled both of these observations out of the unknown pile and ID’d them as just ‘Conifers’: someone else has taken them to species.

On the other hand I don’t have many conifer IDs so you wouldn’t have come accross my name on the leaderboard for that taxon. If you do the same for diptera, where most of my knowledge is, because there is a larger number of observations you can clearly see that my main interest within that group is Hoverflies, and especially the drone flies (https://www.inaturalist.org/observations/taxa?ident_user_id=matthewvosper&taxon_id=47822&place_id=97394, or https://www.inaturalist.org/observations?ident_user_id=matthewvosper&not_user_id=matthewvosper&place_id=any&subview=map&taxon_id=47822&view=species). So this can be useful - just be aware of what it is actually showing you.

The solution by @jeanphilippeb does at least tell you what my actual ID was, but it is very inconvenient. I’m sure there’s a feature request to change the interface for that function… you could vote for that…

I think I’m thinking of this (https://forum.inaturalist.org/t/make-the-my-identifications-tab-operate-the-same-way-as-the-my-observations-tab/30365/19) but it’s not quite the same.