"Great shot!" What can we learn from

Yes, I understand that this topic might easily start a political battle, but I’m hoping that we can we try and put that discussion aside for another day.

See, what I’m really interested in is learning practical tips from the hunting world for tracking, finding, getting close enough to take a good shot – with a camera.

Also, “how not to be seen”. Which I really struggle with.

“how not to be seen”

Or: How to be seen and deemed harmless. I had some good success recently with my camera with swivel screen (and I guess a cell phone in selfie mode might work as well), standing in plain sight but facing away from the animal in question (in this case deer encountered on a trail) and not looking at it while taking a picture. Of course, it helped to be in an area where hunting is not permitted and the deer were accustomed to seeing humans walk around. As long as I didn’t seem to pay attention to it, I was apparently deemed not a threat worth the effort of running away.

You got me in the first part, my inner keyboard warrior almost kicked in.

My experience with my family deer hunting you mostly setup in a blind and just sit and wait for a long time in an area that has deer food, or just add food then blast them from however far away. Most hunting is just sitting on your ass doing nothing and using bait to get the animal into the area. I guess pheasant hunting is a lot of just walking through grasslands in a long line to flush them.

How to be seen and deemed harmless

Yep, it’s a great strategy. As a birder/someone who used to dabble in photography, I used to try to creep up on things. Well, that’s great and it works sometimes, but if the animal notices you it’s going to become alert because you are acting exactly like a predator would.

On the other hand if you allow yourself to be seen but act in a way that you seem to have no interest, the animal likely won’t be concerned until you get too close or it notices you paying attention to it. They’re often keenly aware of any subtle behaviors too, the rabbits in my yard will allow me to get within a few yards if I’m acting like I don’t care but as soon as I look at them they stop feeding and their ears go straight up.

A lot of similarities with hunting. Be quiet, patient, use cover when you can, wear camo or some not-bright clothing. Expect to miss your shot most of the time. Oh, and never point your camera at something you don’t intend to shoot (basic hunter safety). Ok, that last one is less important.

I am attempting to master the process of approaching Dipterans (especially smaller flies) with a clip-on macro on my smartphone, and I wonder if there could any advice be given by an experienced hunter

I’ve heard that birds and perhaps mammals potentially see your telephoto camera lens as a big eye and may react to that as they would to a predator. I don’t see any way around that problem. I’ve noticed that some photographers have camo on their long lenses which looks cool and perhaps obscures the camera, but doesn’t address the “big eye” issue.

I imagine slow and steady in that case, no fast movements and try to avoid throwing a shadow or creating any air turbulence that could be sensed. It seems a lot of insects are somewhat “blind” to very slow movements. I don’t have a phone to try it with, but I have a clip-on Raynox lens for my camera and have had some good success with that. For things like bees foraging on flowers, it sometimes pays off to observe their pattern - how long are they staying per flower before moving on, for example, and then focus on a flower in a patch that is likely to be visited soon and wait for a bee to pop in front of the lens.

Tracking an animal-a deer, which is rather a naive animal, for example. I have walked (very slowly) towards it while keeping a tree exactly between us, and came very close. The it was necessary to extend the camera away from my body, and outside the tree, and get a great shot. The deer stood sideways, probably waiting to see what transpires. But the problem was that I was so excited at the photo op that my hands shook. Any undisguised motion should be no more than an inch per 15 seconds.
In some geolocations, there are various species of wolves and coyotes which watch humans from a tree line, and even take their teenage cubs for educational purposes, to find prey, to watch out for dangerous animals, especially humans, including drunk or noisy hunters, youth wandering around, or stealth camps of homeless.
If possible, carry with you a cloth tarp in camo pattern matching your iNatting environment. In the center of the tarp make irregular shaped holes at different heights. When sticking around one particular location, or between trees, the tarp could be hung by its corners using para cord, which is always dull green. You can make great shots through the holes in the tarp. You can even push and pull the tarp, while moving around, for a great shot.
Smarter animals, like predators, will be alarmed or interested in what’s behind the tarp, so hang the tarp at an angle , so it would not present strictly vertical or horizontal lines, reminiscent of human-built structures. Some predators will be interested in that :-)
Using a tarp is very forgiving, because even if you make an undesired noise, an animal will not run till it sees the source of the noise.
A tarp can be sprayed with an attractant, or smeared with an appetizing food fluid.
A lot could be learned from hunters’ social web.

Slow motion, and approach perpendicularly to the body of that dipteran.

I cannot speak to hunting advice, but bees and flies prefer a lateral approach rather than an overhead approach. Try to take side shots initially, then head facing, to give flies/bees time to assess. Many will then give ample time for overhead shots if you tilt just your camera, avoiding whole arm or larger body movements.

There’re many tracking courses in the US, don’t really need a hunter to teach you how to do that and find an animal who left the tracks. But, there’re also quite a few books written by hunters, easy to read and you will get some skills needed if you find a freshly killed animal (if you live in a place where you can touch it). But getting close enough comes with practice, only in narrow cases you need special skills, e.g. take capercaillie, when they sing there’s a second when they can’t hear a thing (here it’s named after that), hunters learn that part of the song and only move closer when it’s going on, that way bird can’t hear you.

@beartracker Kim Cabrera is a certified tracker. She has a lot of tracking info on her website (link in the profile):
https://www.inaturalist.org/people/beartracker

She may also help ID tracks and scat, if you make observations of those signs.

I’ve seen bird photographers use a portable tent blind (camouflaged) to stake out a location where some desired species occurs. That’s not really practical for most situations. I’ve tried to use available vegetation such as dense shrubs as my blind and not moving too much to let birds come near me rather than me chase them. Sometimes that works well, other times I’ve spent a lot of time squatting in one spot seeing nothing.

My next improvement is a bigger telephoto so I don’t have to get as close. 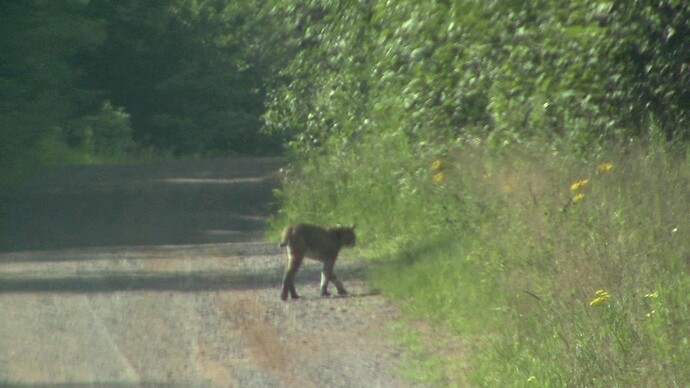 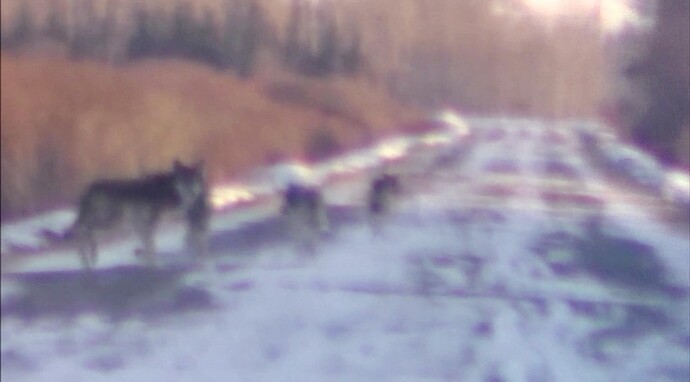 And sometimes inside car 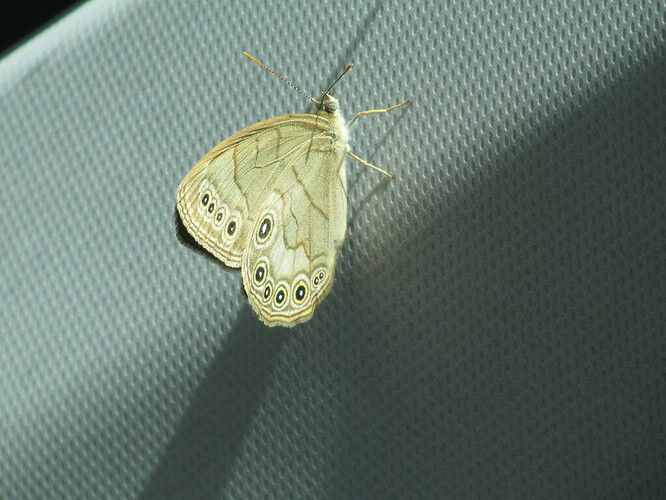 Car as a blind works for us

…and your wolf shot is an excellent example of how even a very blurry picture can still sometimes be identifiable to species.

A lot of wildlife observation strategies are taking from hunting skills. In many parts of the world, including my landscape ex-hunters are turning into the better / best wildlife observers.

Just putting this out for now and later will fill in some details,

Also, “how not to be seen”. Which I really struggle with.

Dark Googles - hides the eyes along with a Mask - hides the face and teeth are sometimes very effective in getting close to primates.

Others have already said