IDs generated by Taxon Swap not counting toward Community ID

I’ve found a couple Bug Reports about similar issues but they never seem to get resolved with a functional solution. Whether this is a “Bug” or not, I’m looking for some way it can be addressed short of manually re-IDing all of the affected observations.

I recently made and confirmed a Taxon Swap to change Andricus fullawyi to Druon fullawayi. @nancyasquith recently brought it to my attention that while the system did apply the correct new IDs, in some observations those IDs have not affected the community ID, so former RG observations with 2 or more confirming IDs (and no conflicts) are now listed as Needs ID. Here’s an example. 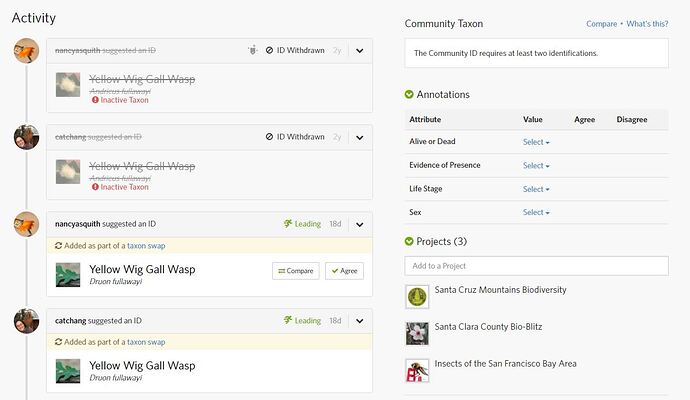 I made several other swaps into genus Druon at the same time, and none of them seem to have been affected by this problem. Is there some mistake I made in creating the swap so I can avoid this in the future? Is there anything I can do to fix it now short of manually IDing the hundreds of observations involved?

I suggest you agree with the first of the new IDs. That ought to ‘force’ the system to update the community ID, or as Marina implies just wait a while :)

I spot-checked obsevations of Druon fullawayi and don’t see this issue on them. It’s possible https://www.inaturalist.org/observations/61743829 never had a Community ID, which does happen sometimes for unknown reasons (likely temporary glitches). I bet it’s not related to the taxon change.

I added an agreeing ID on our test server and the observation updated to now having a Community ID with three IDs (including my new one) and is RG. Interestingly, before I added that ID I faved the observation to get it to reindex and that didn’t change the Community ID, which I would have expected if it was just an indexing error.

I added a third ID to the linked observation and it became RG (3 of 3). I then deleted it and the CT was left remaining (2 of 2).

I spot-checked obsevations of Druon fullawayi and don’t see this issue on them.

This makes sense given the apparent nature of the glitch? I only see 137 observations of D fullawayi at all, but there were more than 418 observations of Andricus fullawayi before the swap. So it’s not just that they’re not going to RG, but that the system doesn’t recognize them as “D fullawayi” in any sense. They do show up if you search by ident_taxon_id.

Tony, when you get a chance, try looking at “https://www.inaturalist.org/taxa/332453-Andricus-fullawayi” There are 408 obs left in that inactive taxon. Meanwhile, Druon fullawayi shows only 136 obs.

I would understand if it was a taxon split, but it was a simple swap.