Mothing season in the northern hemisphere is almost over, what were your best finds, stories, cool species this year?

My moth numbers seemed to be down this year and one thing that really surprised me was that I didn’t see one single Luna Moth.

I got to co-lead two mothing events with an entomologist from the Chicago Field Museum and two other excellent moth-ers at a local nature preserve which was really cool. We found a lot of cool stuff there including my first Giant Water Bug.

I’d love to hear your stories.

237 new Lepidoptera species this year (don’t know how to show only new ones, so here are all), now 99% of them are dead with a few species that can live through frosty nights.
First country iNat observations for Pseudoips sylpha, Colocasia mus, Calliergis ramosula, Trichopteryx ussurica, Descoreba simplex and second (first is from 1992) of Leptalina unicolor, would get more if it was a full moth season!

Unfortunately, I don´t know too much about moths and from that trip only 4 of 73 lepidopterans (not all moths actually) reached RG and in fact only 8 of those recieved an ID besides my own… that takes a bit away from the fun for me unfortunately and I often do not photograph them anymore

The most impressive one for me must have been this one, due to size and general appearance. Very beautyful
https://www.inaturalist.org/observations/110520951

I was excited to see a cecropia caterpillar for the 1st time in many years - but was surprised that it was thriving on a common buckthorn.

I possibly became the first person in the world to ever post a pic online of live adult Bucculatrix enceliae.

Edit: several others retroactively beat me to it, their own moths having been still unidentified when mine was IDed.

Roughly 210 moth species observed this year, with 195 in my garden. (Day flying moths and caterpillars included in this count.) I don’t have enough observations to track trends, but I can say it was a very good year for Hyles lineata and a very bad year for Prodoxidae in New Mexico. 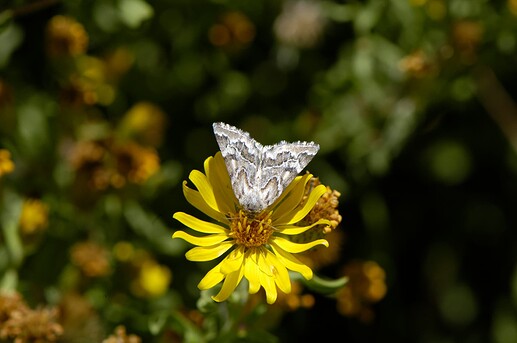 Finally, it was a sad year with the passing of Ian Toal and Vic Fazio, both well-respected members of the iNaturalist community

This was the year I got pretty deep into mothing. As a botanist I can get about 95% of my plants to species level, but I feel rather proud to have named roughly 50% of my moths across 600 observations: 2022 Moths

I found the third record of Schinia scissoides on inat while hiking around in the scrub, lovely looking little moth
https://www.inaturalist.org/observations/130988070 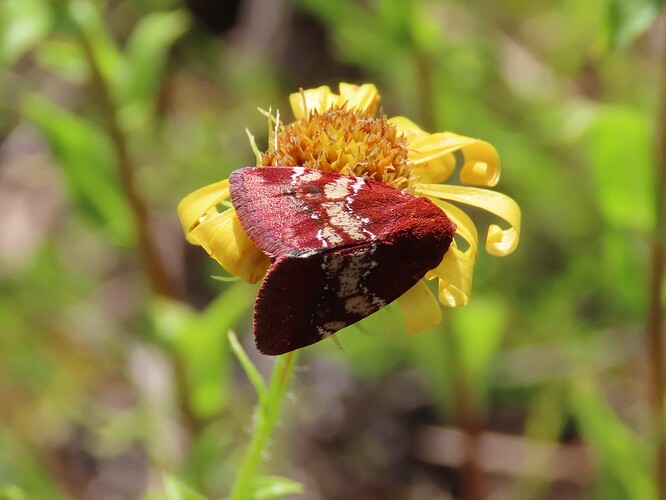 There is a large moth here called X’mahaná which in other parts of Mexico is I guess considered bad luck and called “witch moth” in Spanish, but here on the Peninsula it is considered an omen that you will have a visitor. In fact, its name translates from Maya as “who lives in another’s house”.

And because in many houses the ceilings are high and the walls white and this is a large, dark moth, it is very striking when it alights on a wall. Non-locals often mistake it for a small bat and we have those too (but I have never had one come inside).

Anyway, we are in the period in which they are seen, and not long ago I saw one was just above the main door to the street. I was admiring it and debating if I wanted to rise to cross the room to get my phone off the charger to take a photo, which would alert the dogs and could make the moth frantic and harm it, which I did not want to do. Before I could even decide I heard my husband’s friend call out at the gate just on the other side of that door. It was indeed as if the X’mahaná was announcing him, it was so perfect. In opening the door of course the creature exited because it was probably just resting for a moment anyway.

I do not ascribe to either school of thought because you can always seem to make yourself believe they came true. Eventually someone always shows up or something bad happens, so of course they could appear predictive, no matter what you think they represent, right? But it is fun to think a giant moth might be like a household herald anyway. Hear ye, hear ye, now arrives Miguel!

The formal scientific name is Ascalapha odorata. Here is a photo of a relatively small one on a different day, resting on a door. 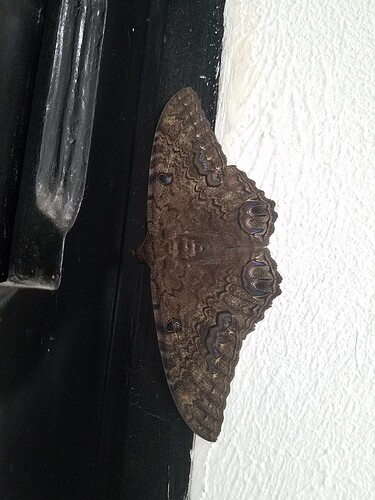 I saw my first rosy maple moth (Dryocampa rubicunda ) this year! And the irony is that I’d given up for the day and was heading home. I got to the garage door, looked up, and there it was! 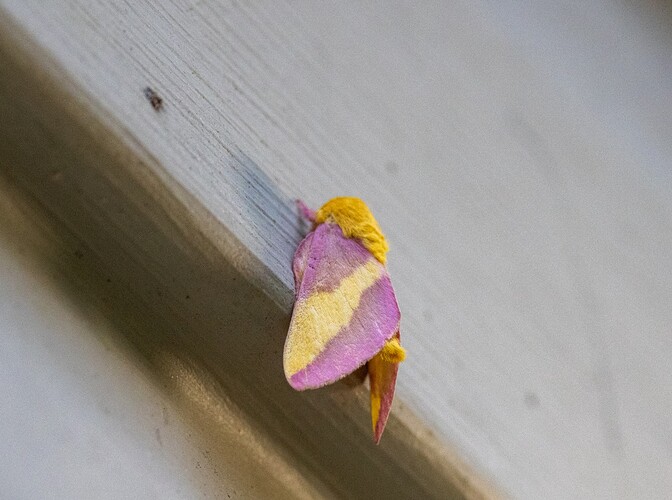 I didn’t put as much effort into my mothing as I would have liked this year, but I recorded 564 species of Leps (so far) compared to my 485 recorded last year. I added 188 new species to my life list, bringing my total up to 910. I suspect I may be able to tally a few more before the real cold sets in here in the Southeastern United States.

I added a number of species that were new to the state of South Carolina on iNaturalist - I would post those but I’m not sure how to create such a list.

One interesting thing I’ve noticed in looking through my species tallies by month is that after the initial boom of diversity in Moths I experience in the month of May here in the American Southeast, I suffer from some form of “burnout” in the month of June where my species tally drops from 356 recorded species in May to 332 in the month of June, and then back up to 369 in July. June is arguably the most speciose month for Moths in my region, so next year I will be sure to get my light out more often then.

Despite my total species tally being higher than last year, I didn’t get my light out into nearly as many remote areas as I had planned. I wanted to bring it to some poorly explored areas in South Carolina, but my insatiable desire to be on my boat catching bass prevented some of that. I did get to put my light out in a few new places in North Carolina and Florida which was a lot of fun.

It turned out to be a solid year of Mothing, and I know where to concentrate my efforts for next year!

I saw a few clearwings this year which are my favorites. I noticed this one sitting unusually still on bergamot, and went “oh…” when I realized what actually went down. 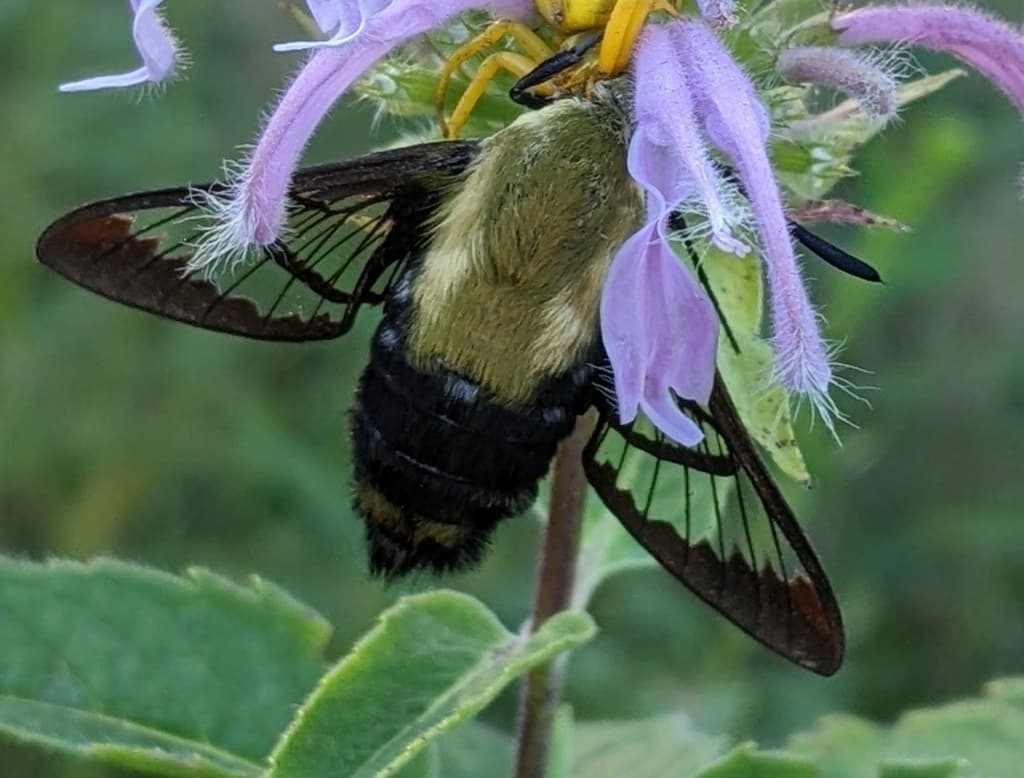 This is so cool! Wow!

Welcome to the forum! I don’t usually get the heebie jeebies from nature stuff, but A. lachesis is creepy!

But it’s the most gentle and calm moth i’ve ever come across. :D
It’s a personal fav this season:)

Welcome to the forum!

I rarely see silkmoth caterpillars, I can only think of one time and I’m not even sure if that’s my imagination. I moreso see cocoons in the winter, especially cecropia in short shrubs. The caterpillars are so fun to rear getting so large and in the case of cecropia being so spectacularly patterned.

Thank you! And welcome! I am rather new here myself so I am not sure it is my place but nonetheless.

I have been to India but not to Telangana sadly, so I am excited to see your observations. (A friend in Chennai and I often marvel at how we seem to have the same plants growing wild in our gardens.)

What do you all mean Cecropia caterpillars? I only know Cecropia as a tree?