Inspired by this post Mothing season is almost over, what were your best finds, stories, cool species this year? - Nature Talk - iNaturalist Community Forum

and a bit of a follow up to this post Bee and wasp updates, notes, or goals for Spring 2022 - General - iNaturalist Community Forum

Since the beginning of October, temperatures have dropped 20-30 degrees in New Mexico and there’s a definite slowdown in Hymenoptera activity. While it’s sad that the adults of this year will die soon, the larvae are just starting their life cycles in nests. 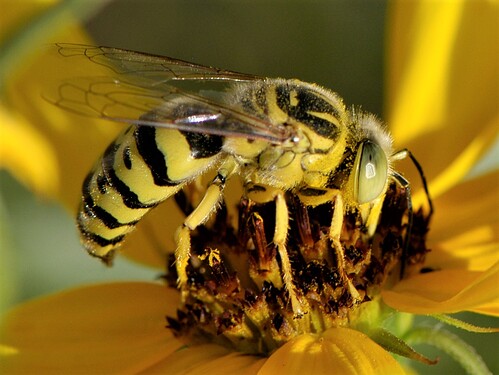 I don’t devote a ton of time to looking for wasps (I’d like to, just not enough hours in the day), but did manage to capture the first known photographs of Xanthoteras radicola 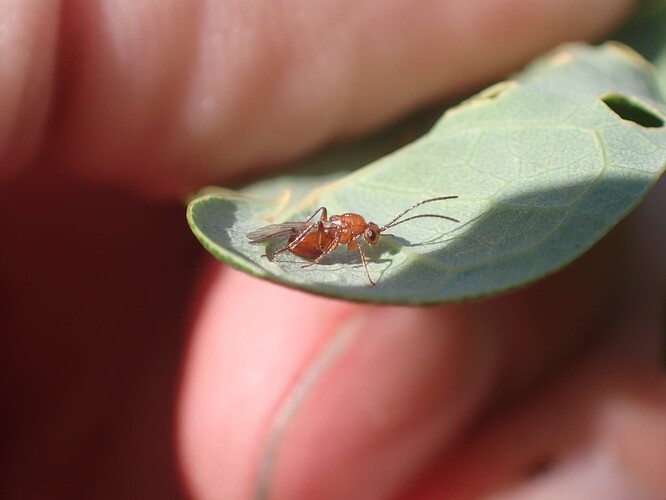 After years of iNatting I got normal pics of 2 Chrysidids and both went to species! They’re usually so fast, too many seen but not shot.
Thanks to iders also got 5 Crabronids ided to species, which is much better than average.
Also some new vespids and bees too. Noticed I pretty much ignored ants the whole year.
I got licked this year by a wasp and bumblebee decided to lick between my fingers and I told her she’s a weird bee to do that. Also saw males Colletes harassing females non stop.
I’m sure not everything idable is ided though, not enough experts in that field. 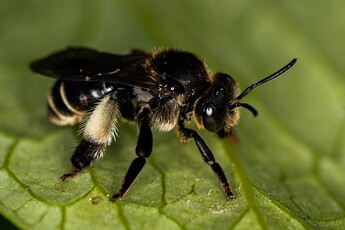 By no means an uncommon species, but I was stoked to see a bit of the courtship between this male and female Eastern Velvet Ant (Dasymutilla occidentalis). 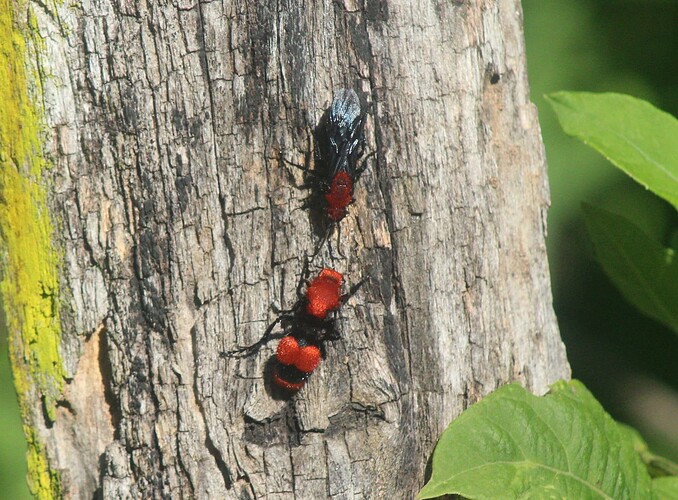 Hymenoptera stats over the last 30 days: 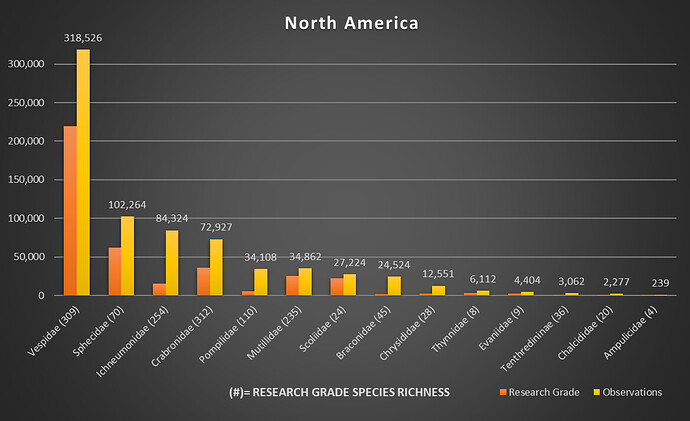 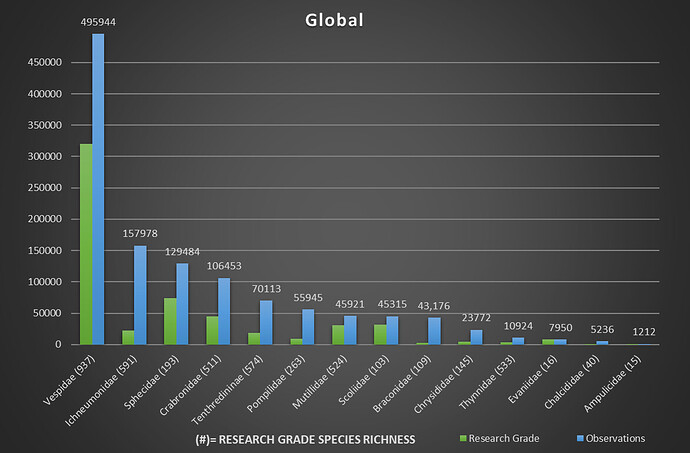 The skew towards Vespids is interesting. I suppose they commonly build nests on human structures and are large and brightly colored wasps.

Thanks for sharing the graphs!

The skew towards Vespids is interesting. I suppose they commonly build nests on human structures and are large and brightly colored wasps.

Yeah, I was surprised to see over 900 vespid species/taxa have attained RG status globally and over 300 in North America. Vespids seem to be one of the most popular groups and are more speciose than some other families. I also considered showing their data by subfamily Eumeninae, Polistinae, and Vespinae, since each have about as many observations as entire families like Sphecidae and Crabronidae.

As with most things here, few of my wasp observations got to species, but I am incredibly grateful to those who brought them closer.

New to me: I saw my first Anomalon and Torymidae, two of each. 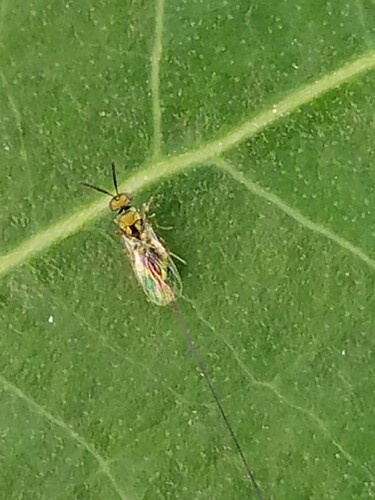 But my favorite is this one who wins for Most bamboozlement along the way.

I hope you’ll submit this to bugguide as well, which lacks any pictures (gall or adult) of that species

I will add that to my bucket list, I have photos of the galls too. 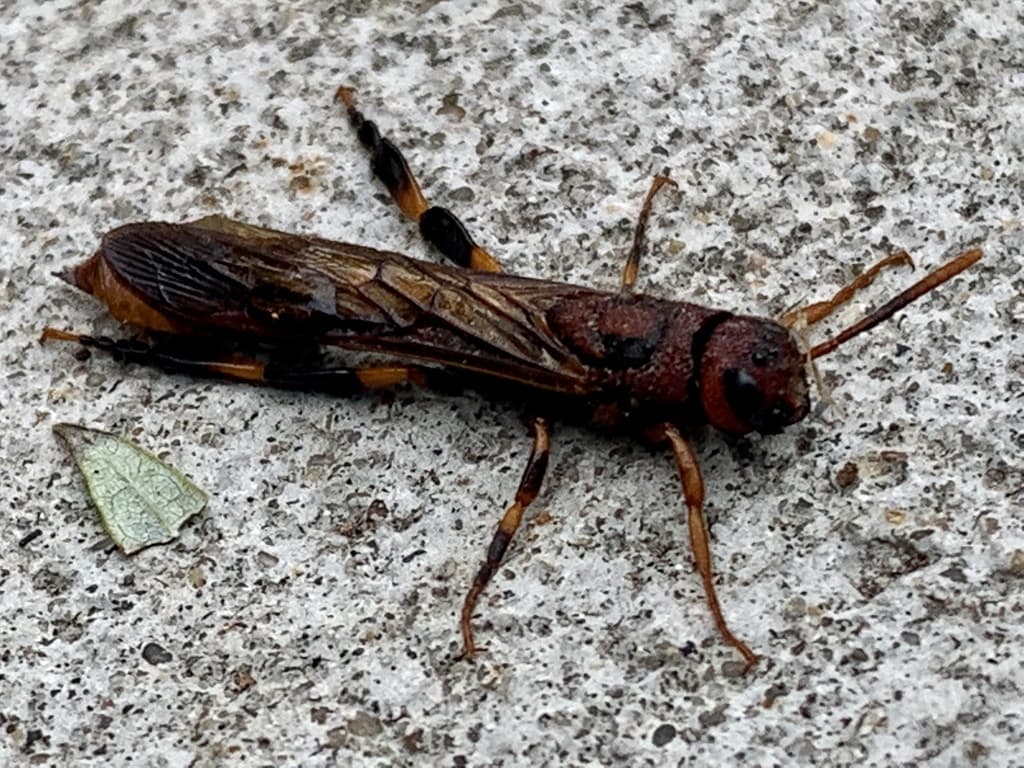 image1024×768 143 KB
It has already gotten cold (22F, -6C) and so activity is down 99% and the season will conclude within days or a week probably.
Our most commonly reported was Bombus griseocollis (46) 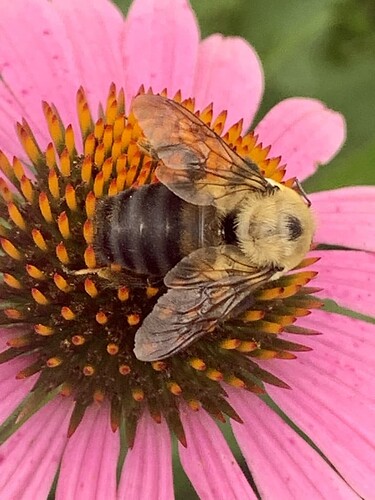 3 of these are threatened species: 4 observations of Bombus affinis, 1 Bombus fervidus, 1 Bombus pensylvanicus.

That’s a gorgeous Tremex, thanks for sharing!

I’m kinda surprised Cynipidae didn’t make the graph. Unlike other wasps, they hold still for pictures.

I’m kinda surprised Cynipidae didn’t make the graph. Unlike other wasps, they hold still for pictures

I considered adding more families but the figures became hard to read. I started with aculeate wasps and then added a few more families. Aculeate wasps also do seem to be the most observed and identified overall, so maybe are also the most abundant or encountered in urban and suburban areas.

That ratio for Ichneumonidae… It’s a hard life ID-ing those :p

Just started using inat this year so I don’t have a lot of bee/wasp observations, but my favorite so far is this one of a paper wasp (likely a dark paper wasp) that was hanging out on my window last week due to the cold. 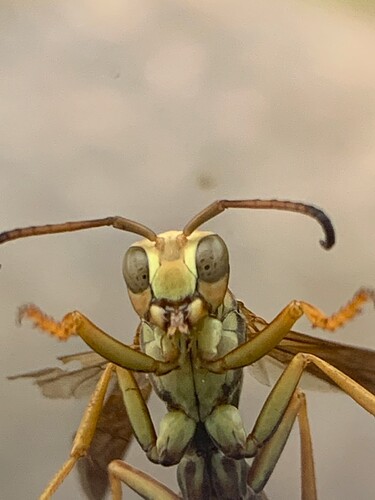 Also just wanted to quickly say y’all are so hard-working and do an amazing job getting all of the thousands of bee and wasp photos IDed. Really excited for the 2023 season! :-)

You all just need to pop down to Australia, wasp season is getting right into the swing of things :)

My story is that I have recently moved from close to the most Southern point of Australia to near-ish to the top and I’m enjoying a whole different diversity of wasps, particularly noting the increase in Vespidae, but the good kind rather than pest kind. I am sad that I might not see any/many Labeninae here, but looking forward to hopefully spotting a Brachycyrtine sometime.

Everything is bigger up here, including the wasps 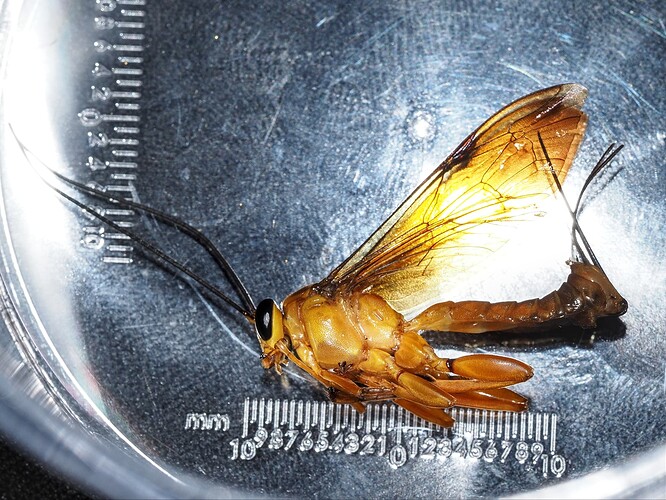 My ‘bee RG %’ is equivalent to the global level and within a percent of the overall Hymenoptera number. Funny how statistics work… Both groups are statistically significantly better than my observations as a whole. Thanks again for all your IDs, Brian! 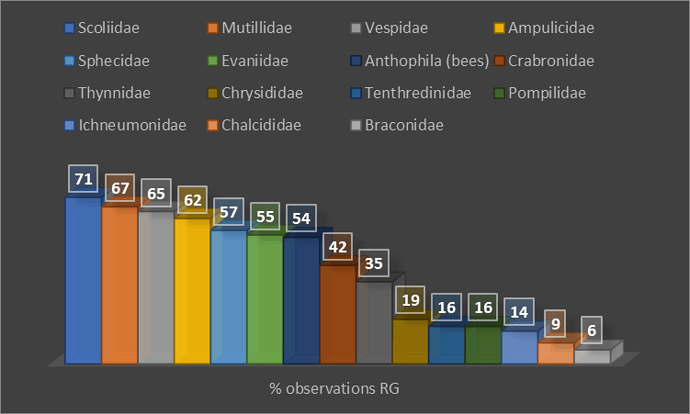 Scoliidae and Mutillidae are actually ahead of Vespidae for percent RG.