Would it be possible to create a simplified text species list (as an alternate view) when viewing the species listed within a project?
When you click the Species tab, it brings you to a screen with all species listed, with an image, and how many observations in each square.
I would like to be able to to see a simplified text view, organized alphabetically, so that it can be quickly skimmed through, and compared to other lists.
Something like:

So on and so forth. Could even put spaces between different Genus so that it doesn’t run all together.

you can do lots of things on your own by using the API. for example: https://jumear.github.io/stirfry/iNatAPIv1_observations_species_counts.html?project_id=butteflies-and-moths-of-garrett-county-maryland

Can you get it in taxonomic order?

the API itself does not have built-in functionality to sort by taxonomy, and even if it did sort by taxonomy, the sorting would not be a true taxonomic sort. instead, it would be a sort based on either the IDs or names of the taxa at any given level in the tree.

that said, you can do this kind of pseudo-taxonomic sorting, if you like, since the API response does include the ancestry for each taxon. i’m not planning to change the page that i referenced earlier, since i think that would go beyond the scope of what the page is intended to do, but you’re welcome to adapt the code to display the ancestry, or sort by ancestry, as you like. there’s also a similar page for taxa that includes code to export a taxon list as CSV, which you could adapt if you think it’s useful.

if you’re not comfortable coding, then you could get a list of taxa one way or another, and then use that to look up the ancestry for the taxa returned by the species count page. once you have the ancestry, you can sort however you like.

you can also work with the API on your own. there are various tools you can use to do this. even a tool like Excel can be used to get data from the API.

That’s just way to much for me to go through at this point in time.
I would still like to request viewing species as Taxonomic Lists for INat itself as a future project feature. I think it would be a great addition for everyone, so they could compare to existing checklists easily.

How about something like this? https://www.inaturalist.org/observations/taxa?place_id=1457&taxon_id=47157&quality_grade=research (Research Grade Lepidoptera in Garrett County, MD) 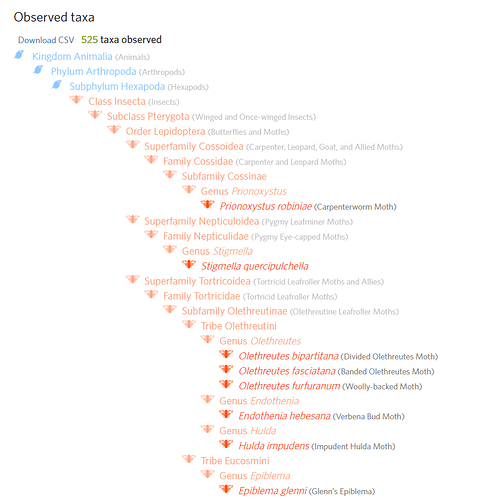 your original request was just to sort alphabetically:

I would like to be able to to see a simplified text view, organized alphabetically

so if you’re really wanting taxonomic ordering, you may want to change your original feature request.

if you’re wanting to just sort alphabetically by name, i don’t think it would be a lot of steps to copy the results from the thing i referenced earlier, put those into a spreadsheet, and sort by taxon name.

UPDATE: there’s also https://kildor.name/inat/species, which can give you the data in CSV format. so you could just take the CSV and sort as you like. this and other tools made by @kildor are described here: https://forum.inaturalist.org/t/several-external-tools-for-inat-data-by-kildor/19906.

This is great! Thanks!!!