What species / taxon is being the most actively identified / has the most community interest in it?

I’ve noticed that some observations get more attention than others. Which taxon do you think the community is most interested in? And why? 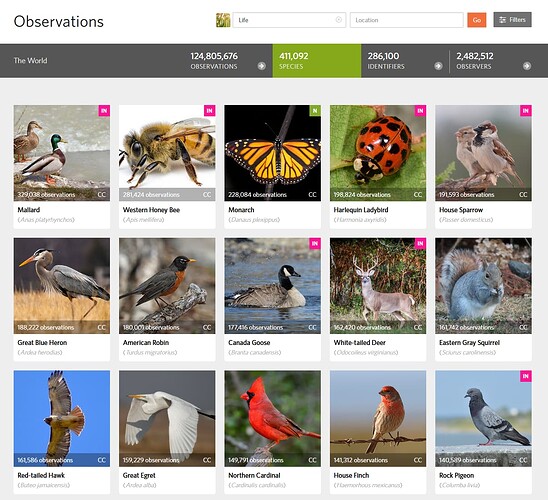 I’m saying in terms of how many people are actively trying to id and just overall interest and also why.

Well, there is a lot of interest around mallards, first from observers adding observations, and secondly from identifiers adding identifications, but I can’t comment on the ratio between them. Otherwise the numbers wouldn’t be so high.

As to their reasons, it surely has to be that male mallards are such handsome beasts.

Birders are really active, large charismatic animals are usually fast to get IDs too. Wildflowers, butterflies, flies, plant galling insects get a lot of attention, but a lot of stuff gets very little- fungi, grasses, mosses, millipedes for example. I think it’s just about small groups of people who are interested enough to put in the effort. Jumping spiders get IDs from a few people but many other spiders sit for long periods, leafmining insects always get IDs from the same person if they are in the project he monitors. One person will always show up to ID a rose gall.

I think it’s just luck, it would just take a moss expert to find inat and suddenly mosses could move from ignored to regularly ID’d in a few weeks.

As to their reasons, it surely has to be that male mallards are such handsome beasts.

Legitimately this made me laugh. But I agree ducks are awesome and I think male mallards are gorg.

Which taxon do you think the community is most interested in? And why?

In my experience, Aculeata (Hymenoptera including bees, ants, and hornets and excluding sawflies and parasitic wasps) is near the top of the most active list. Ants alone has 15-20 users I would classify as active identifiers and bees I would put the number around 10 for North America. Groups like ants and bumblebees achieve RG nearly as fast as birds. As for why, I think there are some people who have learned these groups and enjoy identifying.

Marine life, especially corals, has a few very dedicated identifiers, but I don’t have the experience to directly compare with wasps and friends.

On the other hand, plants, especially tropical areas and grasses, are on the low end of activity.

Bird field guides are easy to obtain (paper and digital) and birds have about 10,000 species worldwide (compare with 20,000 bees and 400,000 known beetle species). In my state, there are about 400 birds versus 4,000 plants, one of the reasons I love using iNat for exploring nature beyond my bird life list.

I agree that ants are very actively identified. Birds are about the same level but probably higher.

As a birder, I really appreciate being described this way :)

as russellclarke’s fantastic screenshot will illustrate, I think what species are most observed, has to do a lot to do with location:

All of those species are commonly attested in North America, where iNat has the largest concentration of active observers.

Birds for sure are the fastest to be identified (within minutes in many cases).

I feel most tiny inverts are largely left in the “needs ID” pile for ages, but that’s because they are tough to ID. Among large and charismatic groups, marine mollusks are VERY poorly represented outside common beach shells. I was looking at entire gastropod families like Volutidae or Buccinidae in the tropical W. Atlantic, and although there are hundreds of species listed for this region, there are probably only a handful of species on iNat, and most are misidentified shell fragments.

I know this is a sampling artifact but I wish there was more collected material, museum material, or ROV/SCUBA images submitted to iNat. Watching deepsea ROV dives like Nautilus or Okeanos which are posted on Youtube would be fun to have organism records harvested as screenshots and put on iNat. I’m sure there are copyright issues for that though.

Geography may play a part? We are in USA, Upper Midwest. Here are some random numbers based on what others have talked about. We recognize these are not all apples to apples comparisons:

I think there is a huge difference between taxon that are most actively identified and those that have the most interest. It is relatively easy to photograph and identify a mallard but I would debate how much interest there is. I think interest would be more accurately represented by how many favs, IDs, and follows an observation gets. Rarer charismatic creatures attract a lot of interest.

Very true. I think that by interest not actively identified, rare ocean and air animals have interest. For some reason, some rare bugs still don’t have much interest.

That is true. Bird id ers are very dedicated.

its not just that as much as it is bias. People love birds! A huge fraction of naturalists are primarily birders, theres so much out there to help people id birds. Bugs? Nowhere near as much. Theres so many invert clades out there that maybe have 1 to 5 people actively studying them globally

As my interest in insects grows I’m realizing that there is little popular interest in them outside of bees and butterflies. Having said that the fact that interest in bees has been increasing rapidly there is hope for other insects as well.

If your taxa is lucky enough to have a dedicated and subscribed IDer that is great. I know Bob Borth and I have Catocala moths covered quite well, but I wonder what is the most observed taxa that has 98-100% ID confirmation (as is almost all RG)? You would need a very obvious and large enough organism for sure, but also one that doesn’t have people submitting blurry or distant images and isn’t popular with the AI suggestions!

Phymata (and assassin bugs in general) get favorited a lot but (mine at least) rarely are brought to species.

That said, I think there is a lot to be said for initially picking what is of interest to you, because then you can develop your best practice and workflow. (This is for that correction project, right?)