I uploaded many observations, most composed of several photos, made at Sarykum Sand Hill in Kumtorkalinskiy District/Rayon, Dagestan, Russia. Each time the first photo got ‘Buynakskiy Rayon’ in the inferred location while all other photos ‘Kumtorkalinskiy District’. Each time the photos were just different shots made while I did not move, and project to the same correct point on the map. Buynakskiy District is nearby, and I know very well that borders are approximate here and administrative attribution may vary and be somewhat incorrect. But I am amaised by the strict regularity in this area: the first photo always wrong, others correct. Examples: 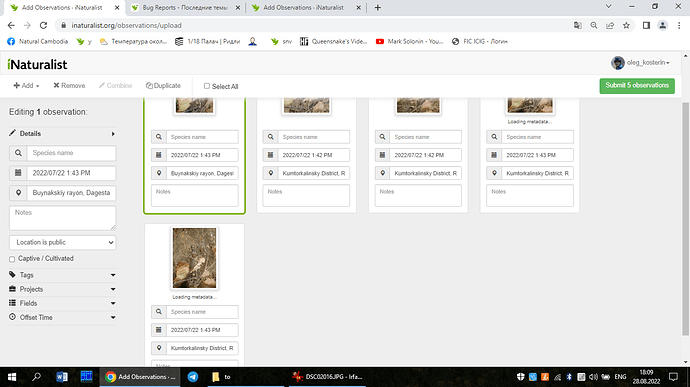 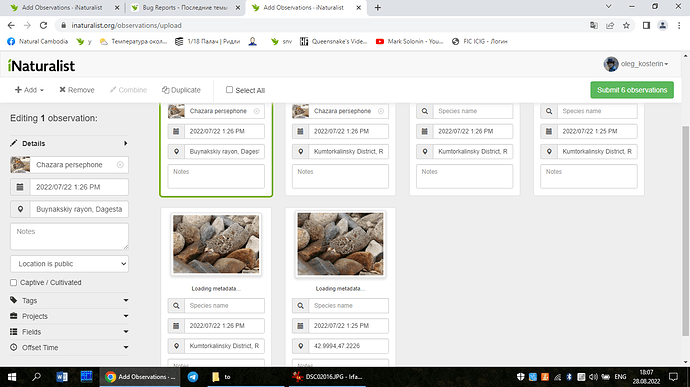 it doesn’t look like you’ve actually loaded these observations yet. what are the exact coordinates of those photos (both good and bad)?

project to the same correct point on the map

my first thought is that even though they look like they’re the same point on the map, their coordinates might be ever so slightly different. however…

I know very well that borders are approximate here

i’ve previously noted behavior where some observations get a detailed place description (as if reverse geocoded), and others simply get a county-equivalent place description: https://forum.inaturalist.org/t/rename-loading-metadata/2826/7. i never understood exactly what was going on here, but i think it still happens, and it may be what you’re seeing in your case.

Since I could not illustrate the case with already uploaded observatoins, I made these examples without pressing ‘submit’ but sumbitted those photos in about half an hour. The coordinates varied in some 6 digit after the comma, as usual, and differently for different photo sets, nevertheless each time the first photo had B… District and others K… District. I suspect that outlines of both district were rather rough and just overlapped in that area. I noticed that the B has the Russian word ‘rayon’ (which means district) and the K has the English word ‘district’. It looks like these two belong to different series of places, as you supposed, and iNat has different priority irder of place search for the first (main) and subsequent photos. Of course, there is no big problem in this at all.

This strange ‘rule’ continues: the first photo in a series uploaded gets a different district for location than others. A very remote region (central Siberia) from the previous examples (the Caucasus) but the same problem. Here ‘rayon’ means ‘district’ in Russian. Tandinskiy Rayon is correct, Kyzylskiy Rayon is situated northerly. 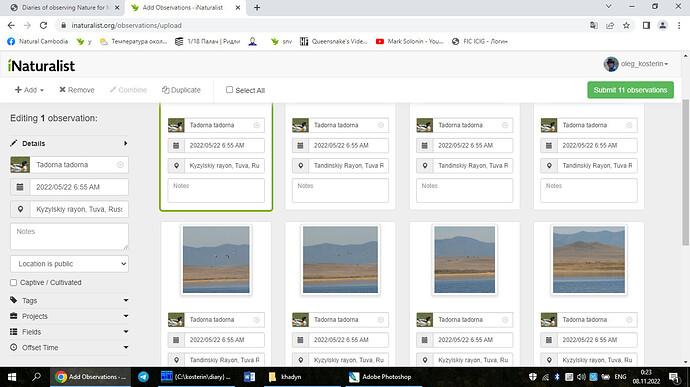 iNat gets the the “locality note” from Google Maps (or Apple Maps in the iOS app) - it just sends the coordinates to the map service and displays whatever name is returned by the map service.

Can you please send a group of these photos to help@inaturaliast.org so I can test them out? Let me know which photo was listed first here.

there must be an alternate path in the code though, since based on the examples in this thread and what i’ve seen myself in the past, the upload does seem to sometimes (randomly?) determine location based on iNat places. for example, if the reverse geocoding service fails to respond or if there’s some sort of race condition, then maybe the fallback is to get a location based on iNat standard place boundaries?

I don’t have GPS so I set my location manually. I ask for a pinned location, then move the pin to where I saw that plant. As I move it, the named location changes. Then I edit back to what I want it to show.

Might be good for uploading to encourage observers to check that the displayed location is what they want and meant. Silvermine Reserve always displays as 2 words - Silver Mine - which is nonsense. It was originally named for a mine, which disappointingly didn’t have, any silver. The mine is history but ‘Silvermine’ (as one word) remains. (Which is the map service’s error, not iNat’s use of it)

Obs on Elsies Peak in Fish Hoek display as Farm 964, Cape Town … which is meaningless to most people. Fish Hoek would be meaningful - but it is up to the observer to know that they have to edit it to make sense.