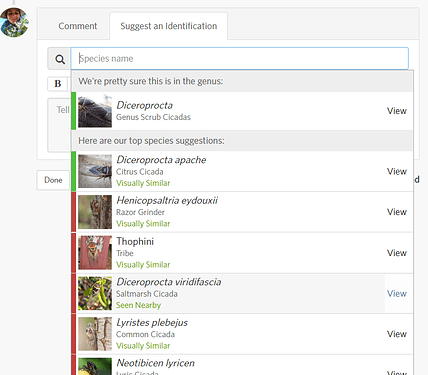 Taxon 244002, Diceroprocta viridifascia sensu lato, was inactivated during a taxon split on July 27th, 2020, but as of today, August 11th, it still appears in the computer vision suggestions (example observation).

Computer vision suggestions that were split should probably be bumped to the common ancestor of the output taxa instead (in this case, the genus Diceroprocta, which is already suggested).

Because there are now an active an inactive version I think. When Diceroprocta virdifascia viridifascia and v. beqauerti were split, any not at subspecies became Diceroprocta and D. viridifascia was made inactive but automatically re-created by the taxon split. (I think that’s what happened).

D. viridifascia is a valid name so it needs to be an option, I think it just got doubled up.

How does the CV adjust when there are changes in taxonomy?

The vision model is hard coded with taxon IDs, so when it suggests a taxon ID of a taxon that is inactive, we try to map that to an active taxon and replace the active equivalent with the inactive one in the results. This is only possible for taxa involved in taxon swaps and taxon merges, so the vision model (and the automated suggestions) will probably get tripped up by splits until we train a new model.

I agree with @bouteloua, it would be nice to handle splits by moving up to the common ancestor rather than suggesting inactive taxa.

This taxon split happened 8 months before the CV-suggested ID.

This issue is still happening: 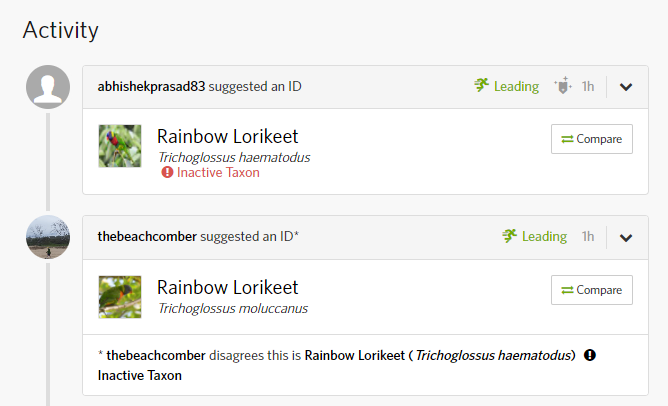 Interestingly when I try to pick something from the AI suggestions, the inactive one isn’t even shown as an option for me??? 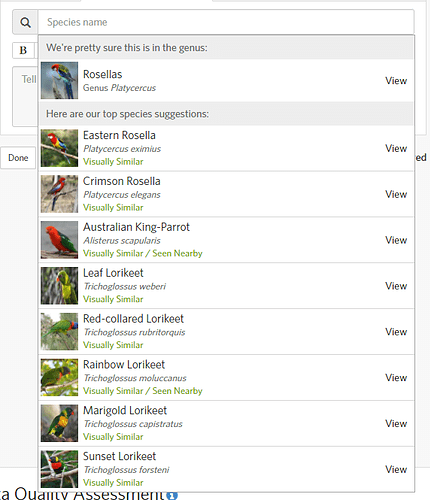 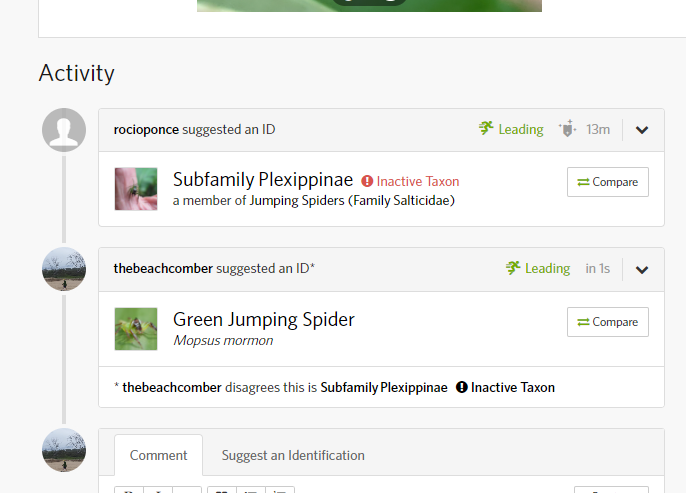 Please include links with examples which will help us investigate. I think found this latest observation at https://www.inaturalist.org/observations/87021865. It was generated with the Seek app, which is susceptible to suggesting inactive taxa via its CV suggestions. In theory, the website and core iOS and Android apps should not suggest inactive taxa (though they could obviously suggest taxa which later become inactive).

My bad, it’s indeed that observation

Thanks for the links. Looks like both of those observations were uploaded from the Seek app. Seek’s on-device CV suggestions are a little different from what the core iNaturalist apps and website use. We’ll look into preventing Seek from suggesting inactive taxa. If anyone notices an example that didn’t originate from Seek, that would be interesting to see.

is there somewhere on an observation that indicates it came from Seek?

In the right column just above the DQA section

(those are both Seek obs)

cheers, that menu was collapsed for me

Here’s 263 observations of Alnus glutinosa (European/Common Alder) with this same issue. There was a split, and all the recent observations appear to be from Seek.
(see this flag)

One that I looked at, https://www.inaturalist.org/observations/41104250 doesn’t appear to be from Seek. " This observation was created using:

Here’s 263 observations of Alnus glutinosa (European/Common Alder) with this same issue. There was a split, and all the recent observations appear to be from Seek.
(see this flag)

You can see the GitHub issue for this here: https://github.com/inaturalist/SeekReactNative/issues/369

Trying to figure out why CV would appear to suggest an inactive taxon. And of all taxons, Unkown!

I come across the use of this taxon from time to time but this is the first time I have seen the CV symbol. Pretty sure this was not the result of a split. The observation was made using the iphone app. 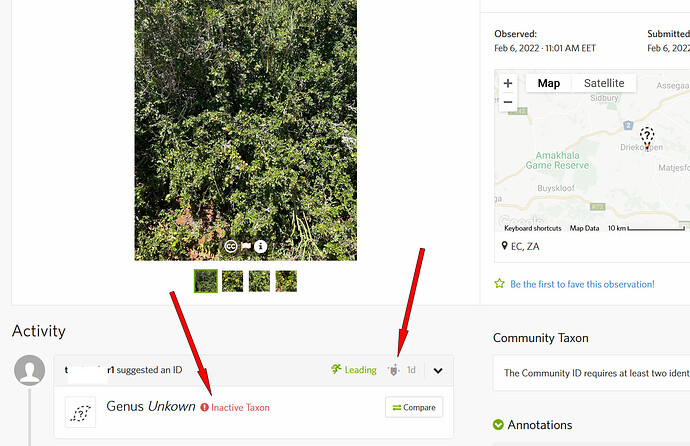 Couldn’t resist adding an ID to that … so no longer Unknown.

But yes - exceedingly odd that iNat would or could suggest Unknown!