NHM Wildlife Photography of the Year

This contest just wrapped and wow! The winners and entries are incredible.

I know there are some incredible photographers here. Has anyone ever entered a contest like this? If so, how did you fare? Want to share your shot so we can ooh and aah?

My photography skills being distinctly subpar, I have not. Not even a county fair!

I have some photos in this contest (voting ongoing) aimed at central Colorado https://www.gogophotocontest.com/garna

I also recommend checking out the many entries to the nature conservancy annual contest https://www.nature.org/en-us/get-involved/how-to-help/photo-contest/2022-winners/

Don’t have enough money for the expensive gear that is used to make shots ok for a contest like this, nor to travel to locations, as you can see most of shots are something about whales, monkeys or something else you just will never see in a regular life.

I don´t agree as I actually see many european species there as well, which is very nice! It does not matter where you photograph to get amazing shots

But I get that the technology aspect is a real issue… a got camera costs for sure.

I appreciate that this winning photo is just behavior happening on Texas dirt, not somewhere exotic.

That said, I just have a phone, not a camera. No binoculars, and no travel funds overflowing our accounts. We are saving up for a domestic trip next year!

PS: You posted a photo recently (upcoming winter thread?) that was beautiful.

How may gr. crested grebe photos we already saw from pro photographers? They all follow them and their chicks. So it feels like one subjest over and over.

How’s that not exotic?.)

Fair point. :) To people closer by, that is not exotic, but to people farther away it might be.

Whereas to me, this photo of bears in Russia which won for “Urban Wildlife” seems exotic, but to you it might not.

(This photo, which won for
“Behaviour: Amphibians and Reptiles”, was taken here on the Peninsula.)

It is pretty unusual, it’s known on the Far North polar bears often visit settlements, there just not much to visit for them.) Great shots, reminded me of folklore paintings. 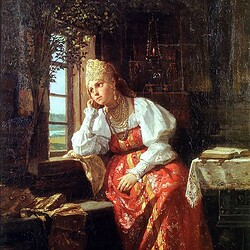 Last winter, @hedgehog111 , organized a “local” photography contest for those of us here on the forum:

Really, there were some terrific entries above. Edit: do spend time with this long thread, if you can. There are many, many exquisite photos not chosen as finalists. I cannot imagine having to choose just 20 from this field of amazing captures.

These were the “finalists”: Voting 2022 Photography contest

What a beautiful painting. She looks so wistful!

Yes, I found the photo really haunting but also a little hopeful? It reminded me of the thing that happens here to empty buildings because everything grows fast, and that is although buildings are built of stone or mamposteria, the sun bleaches the color from the exterior paint and if allowed, plants will begin to grow in any small crack they can find and the building will be taken back by nature. All manner of creatures will move in and through. (None quite as large as polar bears though.)

Wow, what a huge endeavor and how kind of @hedgehog111 to organize it!

How’s that not exotic?.)

Well, observations like this can also be done on european soil (e.g. with Colletes bees which are present in Russia as well btw)! So it´s not as excotic as you might think… it´s more a matter of looking the right way.
From the 100 winner pics in the gallery I counted over 30 that could have been done with the exact same or similiar species on european soil.

I think it is a great misconception that the “fun” is always anywhere else. That´s just not true. Great nature pics can be created anywhere, it´s just a matter of finding the right niche (and of course right equipemtn, creativity and a great proportion of luck). I hope iNat helps it´s participants in realizing that.

I spent years collecting professional photos for my project, looking through hundreds of thousands of them, it’s not as easy, at least to make it the way it doesn’t look like another general “good pic”, but a real masterpiece which are very rare, even in those competitions.

I am not saying producing worthy pictures is easy, otherwise anybody could do it. I just say its possible to produce them anywhere in the world… also also the winner photos depict actually

Whereas to me, this photo of bears in Russia which won for “Urban Wildlife” seems exotic, but to you it might not.

One click on the right arrow took me to this one of a bee which is not at all exotic to me – being in the same part of the world as I am – but I love it even more.

Don’t have enough money for the expensive gear that is used to make shots ok for a contest like this, nor to travel to locations

What about that one taken by a kid of a spider between the walls of his trailer home? Proof that at least some hope remains for the modestly equipped observers.

I don’t strictly follow these contests but it seems to me that over many years there has been a noticeable increase in the diversity of taxon represented in the winners’ circle. I remember when it all seemed mammals, birds and giant trees.

I expect that as the quality and popularity of macro shooting continues to improve at the phone level, the sheer mathematical probability of more invertebrate subject winners will increase too.

Ah. Thanks Marina. Don’t know how I missed that. I’ll take this one out then.